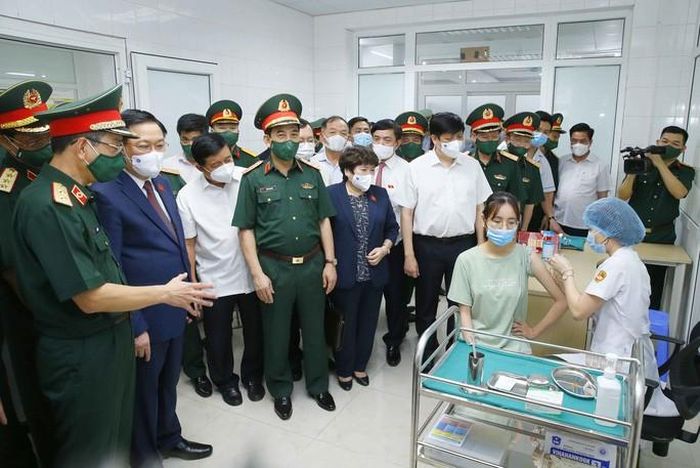 National Assembly Chairman Vuong Dinh Hue visits the vaccine research and production laboratory of the Military Medical Academy – Photo: Thanh Chung A representative of the Military Medical Academy said that it has successfully researched and manufactured a test kit to detect the new strain of corona virus (SARS-CoV-2) by real-time RT-PCR method, used at more than 100 facilities. healthcare throughout the country and exported to 18 countries around the world. Continuing to research and successfully manufacture Amphabio PCR test kits with the ability to test quickly and in large quantities at the same time, which is currently being used effectively in Bac Giang province. Notably, the Academy has been trusted by the Ministry of Health to carry out phase 1 and 2 clinical trials for the Nano Covax vaccine against Covid-19 (from December 2020) and both are generating antibodies. It is expected that from June 2021, there will be a phase 3 clinical trial, deploying over 13,000 volunteers 18 years of age or older. In addition, the Academy has mobilized staff to support the prevention and control of Covid-19 in Quang Nam, Bac Giang, Bac Ninh and Laos. 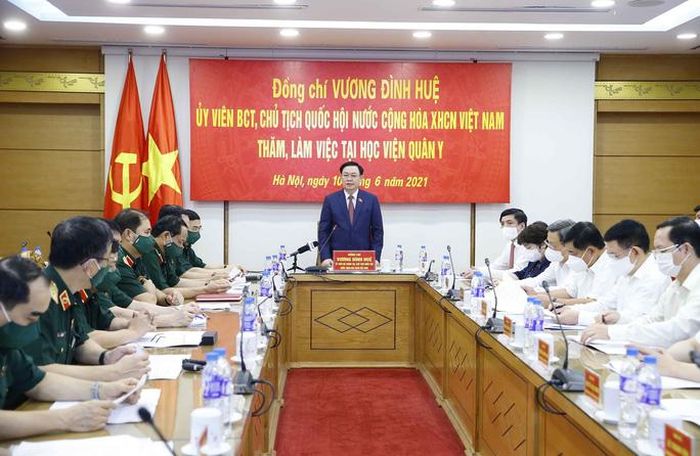 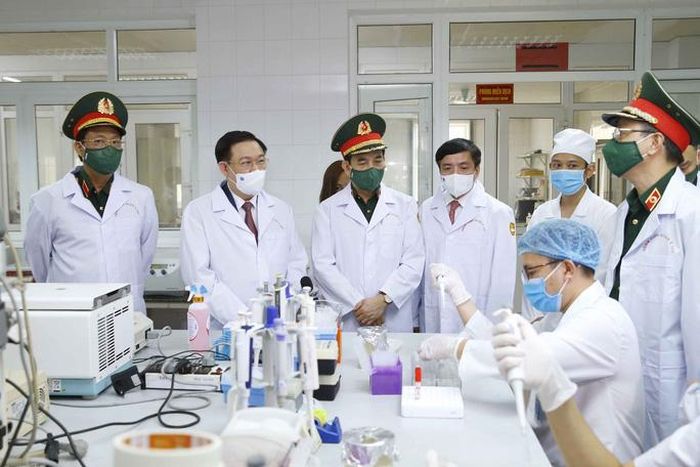 At the meeting, the Military Medical Academy proposed to allow the Academy to organize the implementation of the project “Research and Development Center for Human Infectious Diseases” which was approved by the Prime Minister at the government office. Document No. 164 dated December 31, 2020 of the Government Office, which is expected to have a number of functions and tasks such as research on pathogens, development and production of biological products for detection, diagnosis and treatment of diseases. treating infectious diseases, especially dangerous and extremely dangerous diseases, contributing to protecting the health of soldiers and people, especially in emergency and disaster situations. Researching foundational technologies in development, technology transfer and production of vaccines against infectious diseases, especially dangerous and dangerous infectious diseases. Agreeing with the proposal of the Military Medical Academy, National Assembly Chairwoman Vuong Dinh Hue suggested, the Academy needs a state-level scientific research program and emergency approval to research and test. production of vaccines for human infectious diseases. The Ministry of National Defense shall assume the prime responsibility for, and coordinate with relevant agencies in, facilitating and directing the Military Medical Academy to accelerate the implementation of the project “Research and development center for human infectious diseases vaccines” under the theme of: Government policy. Also this afternoon, National Assembly Chairman Vuong Dinh Hue visited the vaccine research and production laboratory at the Military Medicine Research Center building, under the Military Medical Academy. The National Assembly Chairman graciously encouraged the forces directly involved in research, production and volunteers to test the Covid-19 vaccine.

What to expect at Apple’s spring event?