The mystery of this giant terrestrial animal still makes the scientific world constantly decipher.
An international research team led by scientists at the Center for Ancient Genetics in Stockholm (Sweden) has sequenced DNA recovered from mammoth remains that are up to 1.2 million years old.

Analyzes show that the Colombian mammoth that inhabited North America during the last ice age was a hybrid between a woolly mammoth and a previously unknown line of mammoths. In addition, the study also provides new insights into when and how quickly mammoths adapted to cold climates. About a million years ago, there was no woolly mammoth on Earth (also known as tundra mammoth, scientific name: Mammuthus primigenius) ; or the Colombian mammoth (scientific name: Mammuthus columbi) , because they haven’t evolved yet. The ancient steppe mammoths were their ancestors. Researchers have now managed to analyze the genomes of three ancient mammoth species, using DNA recovered from mammoth teeth that had been buried for 0.7 to 1.2 million years in the permafrost layer. in Siberia. This is the first time DNA has been sequenced and authenticated from specimens that are millions of years old, and extracting DNA from these samples has been a challenge. The scientists found that only a small amount of DNA remained in the samples, and that they were broken down into very small fragments. Love Dalén, Professor of evolutionary genetics at the Center for Ancient Genetics in Stockholm, said: “This DNA is very ancient. The specimens are thousands of times older than the Viking relics, and even more predated the existence of humans and Neanderthals”. The ages of the specimens were determined using both geological data and molecular clocks. Both types of analysis show that two of the specimens are more than 1 million years old, while the third is about 700,000 years old and represents one of the earliest known woolly mammoths. come. The unexpected origin of the Colombian mammoth Genomic analysis shows that the oldest specimen, about 1.2 million years old, belongs to a previously unknown lineage of mammoth genes. The researchers call this the Krestovka mammoth, a name based on the area where it was found. The results show that the Krestovka mammoth diverged from other Siberian mammoth species more than 2 million years ago. “This came as a complete surprise to us. All previous studies have shown that there was only one species of mammoth in Siberia at that time, called the steppe mammoth. But the Our DNA analysis now shows that there are 2 different genetic lines, which we here call Mammoth Adycha and Mammoth Krestovka . We can’t say for sure yet, but we think they may represent two different species,” said Tom van der Valk, lead author of the study. 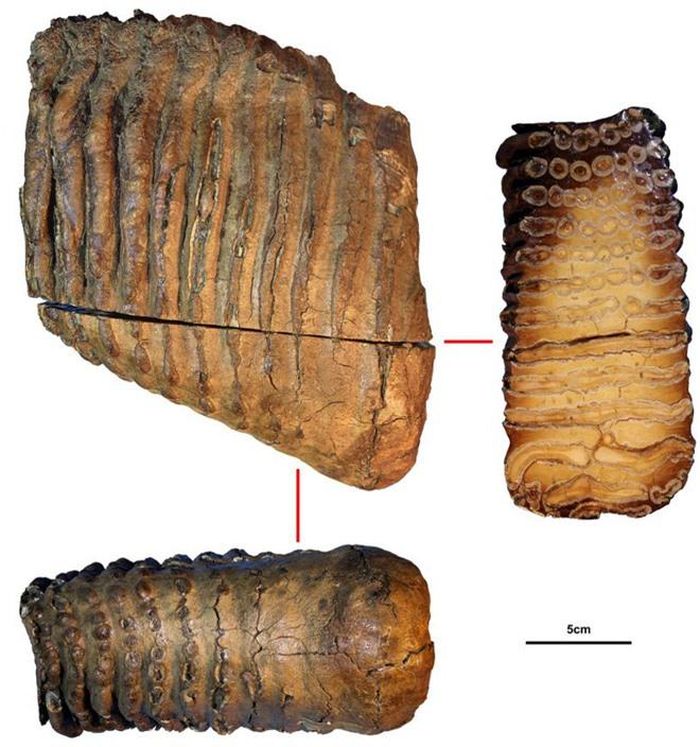 Teeth of the Krestovka mammoth. Source: CPG The researchers also suggest that it was the mammoth of the Krestovka lineage that “dominated” North America about 1.5 million years ago. In addition, analyzes show that the Colombian mammoth, which lived in North America during the last ice age, was a hybrid. Nearly half of its genome comes from the Krestovka lineage and the other half from the woolly mammoth. “This is an important discovery. It seems that the Colombian mammoth, one of the most iconic species of the Ice Age in North America, evolved through a crossbreeding that took place about 420,000 years ago.” – Dong Author Patrícia Pečnerová said. Evolution and adaptation in the woolly mammoth The second million-year-old genome, from the Adycha mammoth, appears to be the ancestor of the woolly mammoth. The researchers were therefore able to compare its genome with that of one of the earliest known woolly mammoths that lived 0.7 million years ago, as well as with the genome of a mammoth. sucking only a few thousand years old. This makes it possible for scientists to investigate how mammoths adapted to life in cold environments and the extent to which this adaptation evolved during speciation. Proving how this giant animal has “risen” strongly over the past millions of years under extreme cold weather. The analyzes show that gene variants associated with life in the Arctic, such as hair growth, thermoregulation, fat accumulation, cold tolerance and circadian rhythms , appeared in the million-year-old mammoth, long before the origin of the woolly mammoth. These results indicate that most adaptations in the mammoth lineage occurred slowly and gradually over time. “Our analysis shows that most of the adaptations to cold weather were present in the ancestors of the woolly mammoth, and we found no evidence for natural selection. faster in speciation,” said co-author David Díez-del-Molino. Like their modern relatives, mammoths were quite large. The largest known species reach a height of 4 m and a weight of up to 8 tons, with some particularly large males weighing more than 12 tons. Future research The new results open the door to a host of future studies on other species.

Love Dalén and co-author Patrícia Pečnerová with a mammoth tusk on Wrangel Island (Arctic Ocean). Photo: Gleb Danilov About a million years ago was a time when many species of organisms flourished across the globe. This is also a time of great changes in climate and sea levels, and the last time the Earth’s magnetic poles change positions. Therefore, the researchers think that genetic analyzes on this time scale have great potential to explore a wide range of scientific questions. “One of the big questions right now is how far back in time we can go. We haven’t reached the limit for the longest. It is expected that we can recover DNA that is two million years old, and even more so. can even go back as far as 2.6 million. Before that, there was no permafrost where ancient DNA could be preserved.” Anders Götherström, Professor of Molecular Archeology and lead researcher at the Center for Paleontology. These findings are published in the journal Nature.

The only ‘pink shadow’ on Hon Cau Island: Spending all your...