According to author James Cummings, the LGBT community in Hainan (China) suffers from many prejudices and is not taken seriously. They have to hide their sexual orientation in order to live a ‘normal life’.
“Ah Kang, come here! I’ll take you to the place where we play mahjong,” Ah Tao, a 29-year-old man living in Gia Dinh city (Hainan, China), called me in the middle of the square.

The “we” that Ah Tao is talking about are gay men on the island, like him. With the aim of understanding the life of the LGBT community in Hainan, I asked Ah Tao to be my guide. Unlike big cities in China such as Beijing, Shanghai or Guangzhou, the LGBT community in the island located on the southern coast of the mainland 30 km is not really well received, has to live a closed life and hide its bias. sexual orientation towards society.

Unlike in Beijing or Shanghai, the LGBT community in Hainan province still faces many prejudices and is not accepted by society. Photo: The Beijinger. Hide your identity 11 years ago, I spent 12 months learning Chinese in Hainan and interacting with the local LGBT community. From that experience, for the past 8 years, I have started researching the lives of gay, bisexual and transgender people in this low-economic and culturally low-value locality. In the past few years, the government has made a lot of efforts to promote tourism in Hainan, but there has not been the same level of investment in other coastal areas. Ah Tao led me out of the square, through an empty market, and into a dark alley. “When you go there, don’t mention homosexuality or heterosexuality,” he warned carefully.

Most have to hide their identities to be able to integrate into the community and continue to lead normal lives. Photo: New York Post. I suddenly recalled in 2009, the first time my friends took me to the only gay bar in Haikou – the capital of Hainan province. It was nestled behind an abandoned hotel, hidden by another row of working hotels. Later, I found out that that is the common point of spaces for the LGBT community – discreet, out of sight. To outsiders, these areas are completely invisible, hard to find. But for people like Ah Tao, this is the only place to take off your mask and be true to yourself. “Happy or sad, I always go to these bars to relax. The LGBT community here doesn’t have that much space,” said Xiaomai, a 19-year-old gay man. However, such bars only exist in major cities on the island. In smaller towns, they can only meet and chat at teahouses, convenience stores and parks. The risk of being discovered, stigmatized, affecting honor, family and work is also greater. Therefore, Ah Tao told me not to mention a word related to “gay”. Following Ah Tao’s footsteps into a convenience store at an intersection in a dark alley, I saw three electric mahjong tables surrounded by many people, men and women of all kinds. Seeing Ah Tao, they turned to ask about love and marriage. “It looks like it, but the men sitting here are all gay,” Ah Tao whispered to me. Accordingly, because they want to participate in community activities, many gay people in Hainan accept to hide their identities and pretend to be a different person. The worry of “no wife, no children” “How do you have a wife and children that are so few these days?”, a woman playing mahjong turned to ask Ah Tao. In fact, gay men here often receive such curious questions about marriage. Family pressure, children are always present, reminding Ah Tao that he is living “no wife, no children”. Many people in the community fear that they will be forced to marry and have children according to the expectations of family and society. “I am happy to make friends, get to know many people like me. But what about the future? How should I face my family, how do I explain the fact that I am still unmarried at 20-30 years old?”, Xiaomai’s heart. 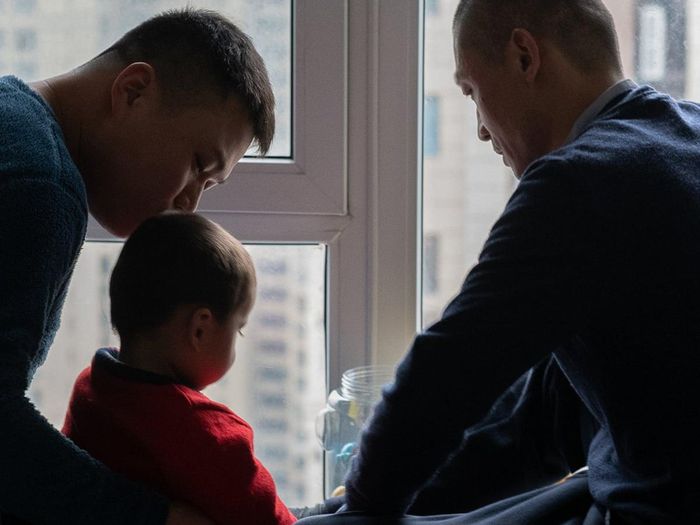 Some gay people living in Hainan choose to have children through surrogacy, which helps relieve the pressure of marriage and the anxiety of loneliness in old age. Photo: The Guardian. In China, the traditional concept of family still has a profound influence in society. For men, they need to be responsible for getting married and having children at all costs. In addition, due to fear of old age without a caregiver, many gay men accept marriage. “I got married partly because of my parents, partly because I was afraid that I wouldn’t have someone to look after me in my old age,” said 24 year old Liang Zongwei, a gay man living in Haikou. Some individuals like Ah Long (36 years old), a factory owner in northeastern Hainan, choose to have children through surrogacy. However, not everyone has the financial means to do this. In big cities, social organizations are trying to change stereotypes and raise social awareness about the LGBT community. But with provinces and cities that have not yet received economic and cultural investment like Hainan, the presence of homosexuals has not been properly recognized. From the experience of making friends with Ah Tao and being exposed to LGBT culture in Hainan, I reflect more on life, wondering if having to hide my true self is really “living”.