Spain – one of the leading contenders for the Euro 2020 championship, had a disappointing first match in this tournament against a much lower-rated opponent, the Swedish team. As the dominant team on the field, but their ability to convert opportunities into goals can be compared to a brave guy with only a blunt sword in his hand. 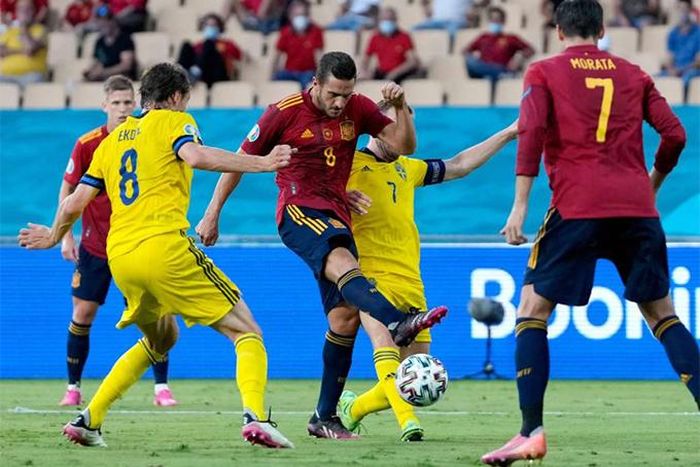 Spain team with 3 EURO championships in 1964, 2008 and 2012, along with a group of good players with many stars spread across all 3 lines such as: David de Gea (Manchester United), Jordi Alba (Barcelona), Thiago Alcantara (Liverpool), Alvaro Morata (Juventus), Ferran Torres (Manchester City)… are certainly much more appreciated than the Swedish team with the highest achievement being only once reaching the quarterfinals in 1992. In fact. On the field also showed the complete superiority of the Spanish team, which is very evident through parameters such as: The Spanish players controlled 75% of the ball, launched 17 shots with 5 times accurate, there are 114 dangerous attacks compared to 4 incorrect shots, 14 dangerous attacks of the Swedish player. All showed a completely one-sided game, but the Spanish team could not score, and had to accept the sharing of points with the Swedish team.

Spain accepted to share points with Sweden in the match where the strikers proved ungrateful This can only be explained as their ability to convert opportunities into goals is too poor, but specifically, the attack is too blunt. This is not too surprising because before EURO 2020 started, people were worried about the sharpness of the Spanish team’s attack, when the names there did not bring confidence. Which idea is really solid. How can you trust when the leader of the Spanish team’s attack is the famous wooden-footed Alvaro Morata, the number of seasons this player has scored in excess of 10 goals just counted on one hand. Besides Morata, what does Coach Luis Enrique have in his hand? Ferran Torres, Dani Olmo… inexperienced; or Mikel Oyarzabal, Pablo Sarabia, Gerard Moreno… have never been considered a class striker. Therefore, the fans of the team from the land of bulls can only sigh and hold their heads from time to time, when Morata, Moreno, Olmo … in turn let the opportunity to score pass. But know what to do when their ability is only so much. If you want to take the Spanish team deep at this EURO, perhaps Coach Luis Enrique will have to have other calculations, the most similar model he can refer to is Coach Pep’s Manchester City. Guardiola. There are many similarities between the two teams when they both have strong midfield, strikers who specialize in turning goals … into opportunities. Pep Guardiola has succeeded with the strategy of using virtual strikers and Luis Enrique can also consider to take advantage of the very good attacking midfielders he has at hand. Cao Duy