Ado Onaiwu, on the day given the highest kick opportunity in attack, shined when he scored 3 goals in just 6 minutes. The remaining goals were scored by Sho Sasaki and Takuma Asano. Japan won 5-1, thereby winning all 8 matches in Group F, scoring 46 goals and conceding only 2 times. 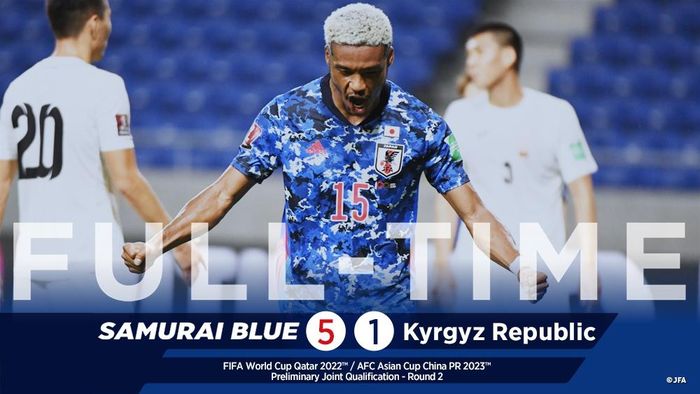 The Japanese team shows strength in Group F. Photo: JFA. The blue team soon overwhelmed after the opening whistle when holding the ball to 78%, launching 14 shots in the first half. However, the Kyrgyz defense played hard and kept the score a draw after the first half. The turning point of the match came in the 26th minute when the home team was awarded a penalty because Ayzar Akmatov blocked Ado Onaiwu’s close-range header with his hand. On the 11 m mark, Onaiwu fooled the keeper and scored the opening goal. Onaiwu doubled the lead for Japan in the 31st minute after a close-range ball from Hayao Kawabe’s pass. In the 33rd minute, the 25-year-old striker completed a hat-trick with a dangerous header. In the last minutes of the first half, Mirlan Murzaev brought the goal to shorten the score for Kyrgyzstan when he successfully completed a penalty of 11 meters. In the second half, the home team continued to dominate when holding the ball to 71%. In the 68th minute, Sho Sasaki was given the opportunity to replace Onaiwu. He immediately made an impression with a goal in the 72nd minute. In the 77th minute, Takuma Asano filled the scoreboard with a kick into the narrow corner of the goal. The Japanese team won the final with a score of 5-1. In the match at the same time, Tajikistan overcame Myanmar with a score of 4-0 to take the second place in Group F with 13 points. Highlights Japan 4-1 Tajikistan: Minamino scores Takumi Minamino scored in Japan’s 4-1 victory over Tajikistan in Group F of the 2022 World Cup qualifiers in Asia on the evening of June 7.