Chinese media reported that the navy sent many warships to live-fire drills in the South China Sea, including a newly manufactured guided-missile destroyer.
South China Morning Post On June 15, citing the official website of the Chinese military, the newly manufactured 052D-class guided missile destroyer, named Nanning, had just made its debut during a four-day live-fire exercise in China. East Sea.

The ship Nanning, coded 162, was photographed participating in the exercise with the 901-class Chaganhu supply ship and 071-class Tuc Nam Son amphibious ship in the East Sea. Global Times , a Chinese state-run newspaper, announced that the destroyer Nanning would be based in the South China Sea. 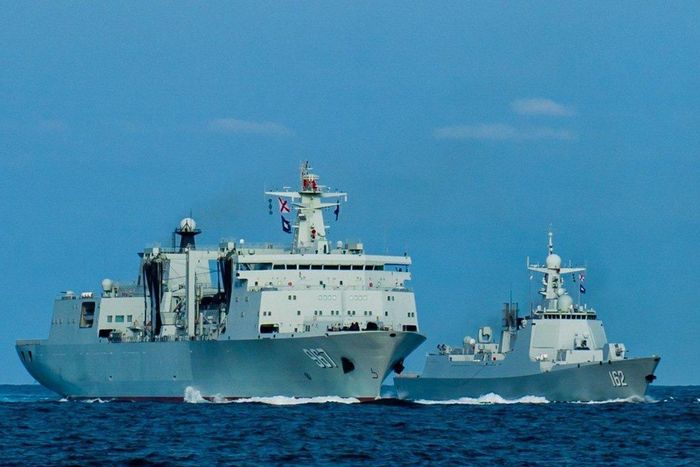 The destroyer Nanning (designation 162) and the supply ship Chaganhu (designation 967). Photo: SCMP. The Nanning ship was put into service in April at Zhanjiang military port, Guangdong province. This is one of three ships of the 052D class to be commissioned into the Chinese Navy in 2021. Before Nanning, two other destroyers of class 052D, Suzhou and Huainan, were also put into service. The total number of China’s 052D class destroyers is now 18. China’s 052D-class destroyers are designed to compete with the US Navy’s Arleigh-Burke-class guided-missile destroyers. They are equipped with state-of-the-art radar and electronic systems comparable to the American Aegis system. Each ship also has 64 vertical missile launchers. Currently, China is massively producing warships. China’s 25th class 052D destroyer is in production. In addition, China has also been producing at least 8 class 055 destroyers, of which 2 have been handed over to the navy, 6 are in the process of construction.

Laws of dynasties of Vietnam and other countries (Part 12)