In the most special tournament ever, the first match of the EURO 2020 final round brought a series of “firsts” in history. 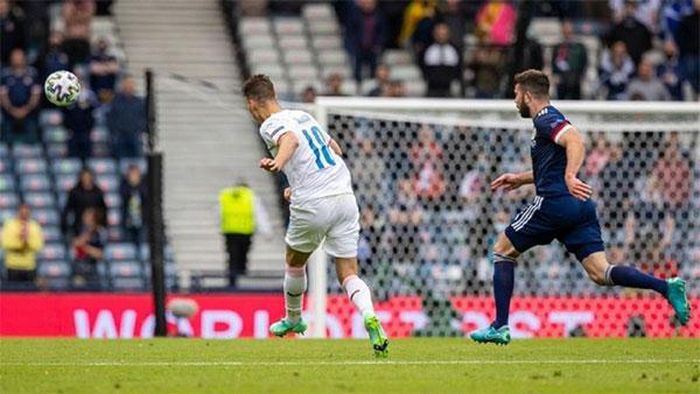 Patrik Schick (left) scored a super goal against Scotland Austria – North Mecedonia 3-1, the two teams made history together when this was Austria’s first victory in the finals after 2 appearances in 2008 and 2016. And in the first appearance, the equalizer scored the equalizer. Pandev’s 1-1 draw was also North Mecedonia’s first goal. Finland did even more, having its first historic victory when suddenly knocking down the Danish lead soldiers 1-0. The convincing 1-0 victory over the world runner-up Croatia is England’s first victory in the opening match of the EURO final after 9 participations. The super product that sent the ball nearly 50m drew a perfect curve into Scotland’s net from the middle of Patrik Schick’s field when he saw goalkeeper Marshall rise close to the center circle to make the score 2-0 for the Czechs as the goal in the longest distance at the finals. With a brace in this match, the striker is playing in Germany for Leverkusen and Lukaku of the Belgian team temporarily leads the top scorer list. Spain also set a series of records since EURO 1980 in the match against Sweden: 85.1% possession of the ball, 419 passes in the first half. However, the most important thing was the goal they scored. did not get it (draw 0-0). Second round in 24 hours Day 16-6, 20 hours: Russia – Finland (B), 23 hours: Turkey – Wales (A) Day June 17, 2 hours: Italy – Switzerland (A)

Werner has been compared to a blind horse