Since humans began launching rockets into space, debris from space has returned to Earth in many unexpected places.
Since the Earth’s surface is largely inhabited by seas and uninhabited lands, the probability of space debris falling into people’s homes is very small from a statistical perspective. But this is not unheard of, the Washington Post reported. 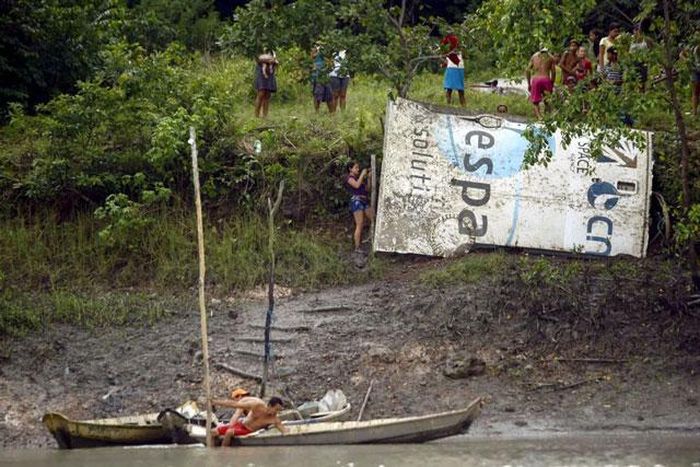 People in Brazil are examining debris believed to have belonged to a European spacecraft in 2014. Photo: Getty. Sea of ​​Japan (also known as East Sea) The phenomenon of space debris falling to the ground and causing damage was first recorded in 1969. That year, Japanese diplomats informed the United Nations of an unidentified object from space falling from space. down and collided with a Japanese cargo ship moving off the coast of Siberia (Russia). The collision seriously injured five crew members. Not long after, a Soviet ship at that time appeared to search for the wreckage. The Japanese official said the debris was identified by experts as part of a Soviet spacecraft. However, this information was initially kept secret by Tokyo because it did not want to create a conflict with Moscow, according to AP. Northwest Territories, Canada The danger of objects from space became apparent in 1978, when Cosmos 954, the Soviet Union’s atomic-powered satellite, crashed to Earth. The incident caused radioactive debris to be scattered throughout the Northwest Territories, Alberta, and the Canadian province of Saskatchewan. After the incident, the Canadian government organized a large-scale “Operation Morning Light” to search for tiny pieces of radioactive material that fell on the Arctic tundra. The cost for this campaign is nearly 14 million CAD (equivalent to 11.5 million USD). 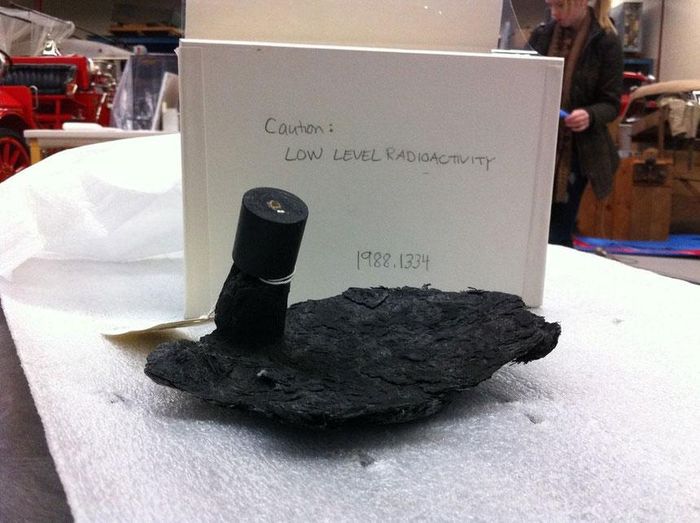 A fragment of the satellite Cosmos 954. Photo: United States Department of Energy. Canada demanded compensation from the Soviet Union at that time in the amount of 6 million CAD (equivalent to 5 million USD), but Moscow ended up paying only half of that amount. State of West Australia, Australia In 1979, Skylab – the first space station of the US Space Agency (NASA) – broke up while re-entering the Earth’s atmosphere. The incident caused a lot of debris to fall across the farm town of Esperance in West Australia, Australia. 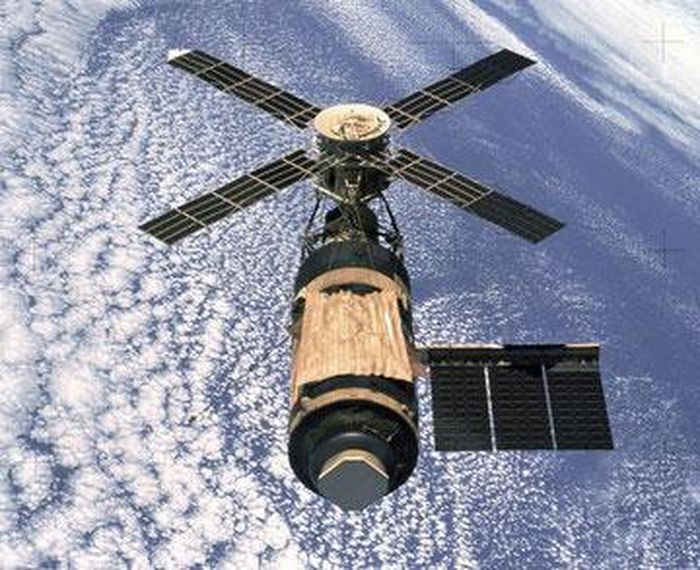 The Skylab space station was photographed by the last crew before it broke up on July 11, 1979. Photo: NASA. “It’s the most beautiful fireworks display you’ll ever see,” Brendan Freeman, a retired farmer, told ABC. The debris did not cause major damage, but for fun, the town of Esperance authorities wrote a $ 400 NASA fine for littering. NASA did not pay the fine, possibly out of fear of setting an unfavorable precedent. In 2009, a DJ in the city of Barstow, California (USA) called for fundraising and brought the fine to pay the town of Esperance. Lakeport, California, USA Early one weekend in 1987, a retired aircraft mechanic living in a town near Mendocino National Forest in northern California heard what sounded like gunfire outside his bedroom window. After searching, he discovered a scorched metal piece more than 2m long lying in the alley next to the house. An analyst with the US Air Force determined that the object was most likely a piece of debris dropped from a Soviet missile. This rocket has previously been seen flying across the sky while burning up and falling to Earth. “It’s interesting because things like that don’t happen around here very often,” Maggie Pickle, the mechanic’s neighbor, told the AP. Tulsa, Oklahoma, USA 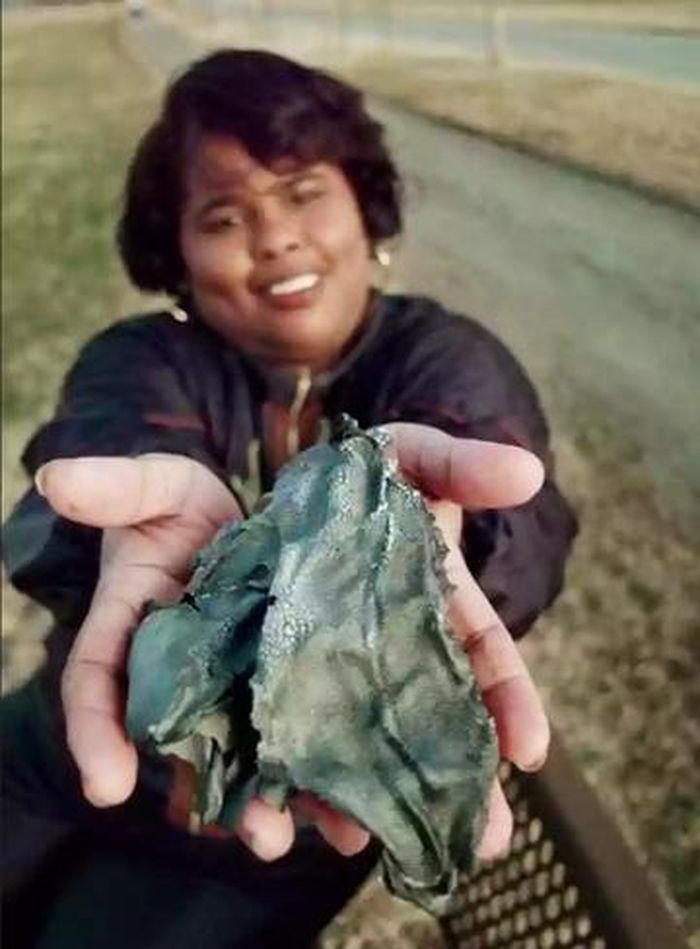 Lottie Williams holds up a piece of debris that hit her shoulder from a US Delta II rocket in 1997. Photo: Tulsa World. One morning in 1997, Lottie Williams was walking with friends in Tulsa City Park when she saw what appeared to be a comet streaking across the sky. This object fell on Mrs. Williams’ shoulder, but the impact was very light, almost without feeling. This object was determined by scientists to be most likely a fragment of a US Delta II rocket. The fragment was kept by Mrs. Williams as a souvenir. “I had to be very lucky for the debris to be so light. It was one of the strangest things that ever happened to me,” Williams told NPR in an interview years later. East Texas and Louisiana, USA, In 2003, the US space shuttle Columbia broke up while re-entering the atmosphere, killing 7 astronauts on board. In places where the debris of the shuttle hit the ground, temporary memorials were erected for the crew. People in rural areas along the Texas-Louisiana state border reported seeing debris from the ship falling into a water storage tank or through the roof of a dental office. Someone even tried to sell a fragment on the e-commerce site eBay for $ 10,000. In the end, 84,000 pieces of wreckage from the wrecked ship were collected after an extensive search in swamps, woodlands, and grasslands. These debris were used to rebuild the ship and determine the cause of the disaster. Ivory Coast In May 2020, another Chinese Long March 5B rocket also crashed to Earth. The rocket was initially thought to have landed in the Pacific Ocean, but some people reported hearing a sonic boom and seeing metal shards falling from the sky. This shows that some parts of the Long March 5B missile fell on the village of Mahounou, in Ivory Coast. 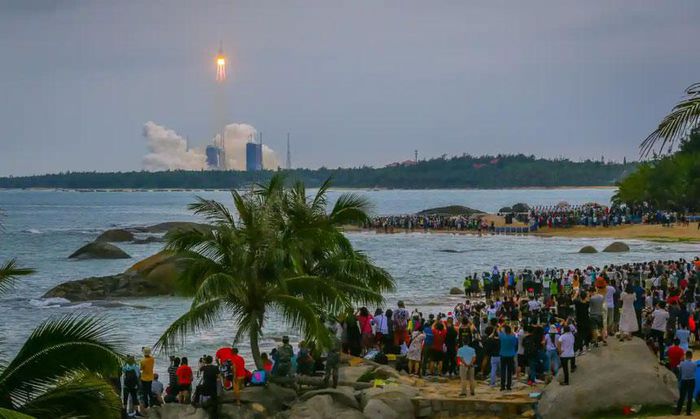 China’s Long March 5B rocket launch in late April in Hainan province. Photo: Getty. However, there were no reports of human casualties after the incident. The discovery of a piece of pipe more than 12 meters long also seems to help this area get more attention. Grant County, Washington State, USA The most recent space debris incident occurred just over a month ago, when a rocket owned by private aerospace company SpaceX exploded over the Pacific Northwest. The explosion created a “show of light,” which some initially mistook for a meteor shower, according to The Verge. A piece of equipment from the rocket fell on a farm in Washington state, leaving a mark more than 12cm deep in the ground, The Verge reported. A similar object was also discovered by fishermen off the Oregon coast a few days later, but authorities have not confirmed whether this is debris from a SpaceX rocket.

Growing gourd gourd with frankincense: A dream in the midst of...

HÀ PHƯƠNG - April 18, 2021 0
There was a time, everywhere in the mountains of Quang Ngai, every house planted gourd plants, a few dozen or more, thousands of trees...