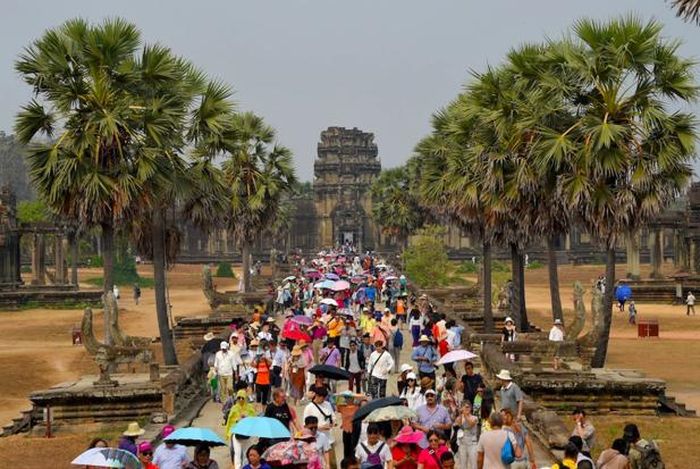 Cambodia’s Angkor Wat temple complex was bustling with tourists. (Photo: Asia Times) The Chinese ambassador is said to have repeatedly said that this data is needed to help Beijing monitor the movement of people between the two countries, but the reality is that China is now imposing strict quarantine measures. strict for visitors and the two countries do not share borders According to reports, people who install the Stop COVID-19 app when entering a specific location will receive a message of a 6-digit sequence via phone. They need to enter this code to be granted entry. In this way, a digital log is created to record and track the user’s location based on the phone where the app is installed, as well as their behavior and relationships. Sources said that Ambassador Wang and other Chinese officials offered to assist the Cambodian Ministry of Post and Telecommunications in upgrading the current QR system with Huawei’s modern digital technology. Last year, China also made a similar offer to Thailand to access two movement tracking apps “Thai Chana” and “Mor Chana”. Chinese agencies are said to have requested access to information about foreigners in Thailand. The Chinese official told Thai authorities that any decision on allowing Chinese tourists to return to Thailand would also depend on sharing information on the Thai Chana and Mor Chana apps. Beijing has a bargaining chip when it comes to this proposal. In 2019, when the pandemic had not yet begun, Thailand welcomed 11 million Chinese tourists, more than any other country. Tourism accounts for nearly 20% of Thailand’s GDP and is currently suffering extremely serious damage because of restrictive measures to deal with the epidemic. However, Thailand has dodged this sensitive offer from China thanks to skillful diplomacy, the sources said. Thai people say that it is difficult to gather all the information in one application because the information is stored in many different databases. Cambodia is even more dependent on Chinese tourists. Out of a total of 5.29 million visitors to Cambodia in 2019, 2 million were from China. Tourism accounted for 32.7% of Cambodia’s GDP that year, but has been virtually crippled by the pandemic so far. Experts say Cambodia’s vulnerability and strategic location make it one of the focus of China’s influence efforts, as well as a target China wants to monitor, especially is with sensitive people in government and armed forces.