The crossroads of Cat Linh – Giang Vo is one of the places where the old beauty of Hanoi can be seen through a chimney that is over 100 years old, still standing right next to the ‘modern’ beauty of the streets. More specifically, the modern station of the Nhon – Hanoi urban railway line is gradually taking shape in this area.
Historical evidence
Every time I pass the intersection of Cat Linh – Giang Vo, if I have the opportunity, I will circle around the red brick chimney attached to my childhood – the time of “rain bathing” also came here to pick up a piece of waste brick. grind marbles, or pick up a few thin tiles and run to the opposite pond to throw thia lia. Then remember a long time ago, when Cat Linh street was a street selling bricks and tiles, toilet equipment and bathrooms; Nhat Tan is a street selling dog meat. The change of these two streets is perhaps enough to generalize the process of Hanoi’s transformation from the subsidy period to the renovation period in a few decades.
The 50m high chimney located on the premises of Pullman Hanoi Hotel (formerly Horizon Hotel) is a historical vestige of Hanoi, marking the time when Vietnam entered the industrial age in the early twentieth century. It is not spectacular, striking people’s eyes like a pillar “against the sky”, but only persistently standing there as a witness to retain the cultural and historical elements for the street space, quietly witnessing the development of the city. urban development. 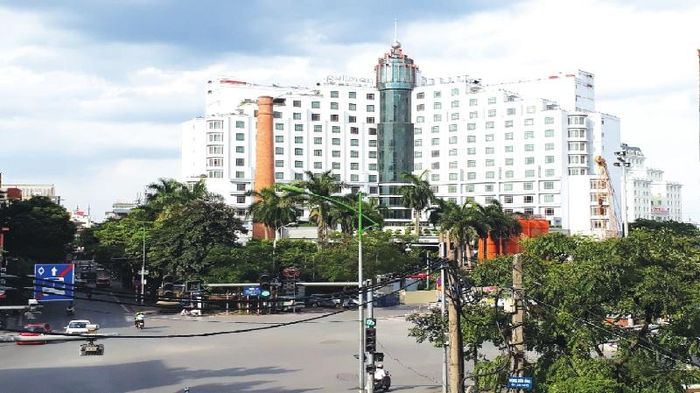 The old chimney built of red bricks is located on the campus of Pullman Hanoi Hotel. Photo: Qinghai Location of Pullman Hanoi hotel, formerly Tam Tile Factory or La Tuilerie Tonkinoise. The factory is equipped with presses to produce bricks and tiles; there are two chimneys 50m high, built according to European standards to draw air into the double tunnels of the kiln, each 100m long. The factory was built by Mr. Nguyen Van Giem, also known as Nam Giem. During its heyday, more than 600 workers worked here. The factory was shut down during World War II and reopened in 1956, and later became a state-owned enterprise.
Entering the renovation period, the factory and land were invested with foreign FDI capital to build one of the first five-star hotels in Hanoi but still retain a chimney. In the project of building the hotel, the designers once intended to destroy both chimneys of the brick factory. Fortunately, in the end, “historical evidence” was kept to decorate the hotel due to the demolition party, after the demolition of the first one, the price was too high for the other. Perhaps this is also a “destiny”, not a human effort.
Today, the more than hundred-year-old chimney looks so small and simple compared to the majestic buildings or the splendor and prosperity of Hanoi Capital. However, this evidence has contributed greatly to making Pullman Hanoi Hotel well known to many people, especially for those who love Hanoi and want to keep the old beauty in the heart of the city, which contains both cultural and cultural elements. history in the same space.
Priceless Values
There is a man named Martin Rama who fights tirelessly for the preservation of ancient Hanoi. He has a photo book “Hanoi a roaming place” taken and written by him, while implementing the project “Sustainable Urban Development in Hanoi – Sustainable Development of Hanoi Capital” initiated and chaired by him. The project aims to advise the city on how to develop the new and preserve the old. Anyone who loves Hanoi like Martin loves how to keep the beauty of Asia mixed with French architecture, the look of Russian onions, ancient China and a little bit of the wet rice civilization rising low and high, in the heart. City…
Today, Hanoi in particular and Asian cities in general have made rapid development steps, many commercial centers have been built but still lack a high-class commercial center that can combine shopping. with cultural and historical elements in the same space. In London (UK) has a Covent Garden, San Francisco (USA) has a beautiful Ghirardelli area.
Many investors find demolishing old houses and building new ones as the cheapest way and according to the wishes of people with money. But the cultural values ​​hidden in each brick or wall with hundreds of years old cannot be calculated in money. According to Martin Rama, an important principle that needs special attention is to prioritize in-situ resettlement for the original residents of Hanoi. He said that Hanoi is inherently attractive and unique not only because of its uniqueness in architecture and landscape… but also by its residents. Every Hanoian is already a cultural entity with great attraction, this value cannot be calculated in money…
Returning to Pullman Hanoi and its durable old chimney, I secretly wish, if only investors were like this hotel owner, understanding what cultural and historical elements are in the same space to be next to. The construction of the new building still preserves some of the old features. Currently, the Cat Linh underground station of the Nhon UMRT line – Hanoi station, with an entrance next to the Pullman hotel on Cat Linh street is under construction and gradually formed. We, the people of the Capital and tourists can completely go to Pullman by French-style subway and hope that 100 years later, there is still a historic chimney.
With another UMRT project, Line 2, section Nam Thang Long – Tran Hung Dao, international visitors can go directly from Noi Bai airport to Hoan Kiem lake, connecting from the modern place to the “sacred and sacred” place. pompous”. On that UMRT line, there is underground station C9 (Hoan Kiem station) which will be a link between the past – present – future, contributing to the construction of the capital of a thousand years of civilization, bright – green – clean – beautiful… The construction The metro station in Hoan Kiem Lake area not only develops transportation infrastructure, contributing to socio-economic development, it is also a way to bring tourists from all over the world to the heart of the capital. do, is the current hyphen with the thousand-year cultural values ​​of Thang Long – Dong Do – Hanoi. The story of the chimney column that survives the construction of a monumental structure is a good example of the success of an approach that respects the past. The capital of Hanoi has thousands of years of civilization, through a long history we have countless stories like that, the heritages carry with them layers of cultural and historical sediments that need to be enhanced and brought to life. new colors over time.

Dawn on the Ganges River