Home Travel Spending money on an airplane wedding in Japan

Japan’s All Nippon Airways (ANA) has launched a service that allows couples to hold weddings on planes, amid the suspension of flights due to the epidemic.
According to the Japan Times , this service started at the end of May, will operate until June 13. A representative of All Nippon Airways said that having completed the reservation, there are 7 couples who will hold a wedding ceremony on a Boeing B-777 passenger plane at Haneda Airport, Tokyo.

On May 23, the first in-flight wedding was held in the business class of an ANA plane for Toru and Mami Murakami, a Tokyo couple. The wedding was attended by a pilot, some of the airline’s flight attendants and a few guests to witness the special moment. 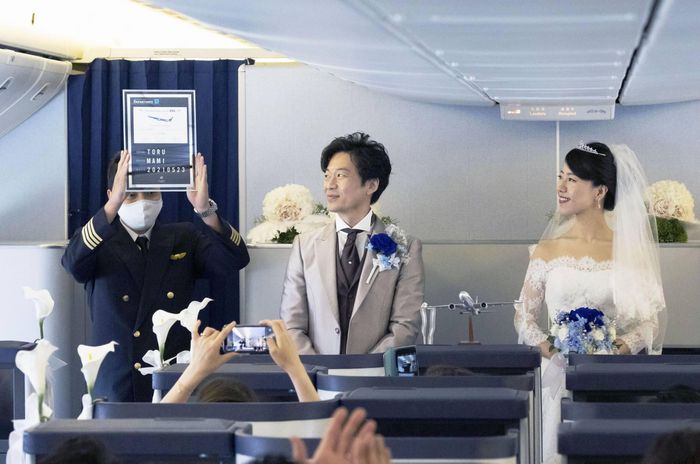 The pilot holds up the marriage certificate of Toru and Mami Murakami. Photo: ANA. During the wedding, the airline will provide a band, accompanied by a message from the crew to celebrate the happy day and special lighting system that projects the image of the galaxy on the ceiling of the passenger compartment. ANA said the price for the in-flight wedding service was 1.56 million yen ($14,200), combined with the party held in the airport lobby for 3 million yen ($27,338). The wedding ceremony is limited to a maximum of 30 people. Before knowing about the wedding service on the plane, this couple planned not to hold the wedding, just taking a few photos to celebrate the big day. “I signed up immediately, because it would be a wonderful memory and we both love flying. There was a time when I thought it would be impossible to get married during the escalating epidemic situation, but in the end I was very happy. satisfied with his wedding ceremony,” said groom Toru. Before that, the airline had unique campaigns to attract the attention of the soon-to-be-married couples. Although the months of May and June are considered “wedding season”, many people have to limit the organization of mass gatherings to prevent the Covid-19 epidemic. Most weddings are affected by the ban on serving alcohol at party venues. In an effort to reduce the damage caused by the pandemic, ANA used to offer domestic tours by Airbus A380 aircraft. Each flight lasts 3.5 hours, passengers are served meals.

Admire the two large rocks that are considered to be the...

Lâm Phan-Phương Anh (Vietnam+) - May 25, 2021 0
Elephant Father and Mother Elephant are two of the largest monoliths in Vietnam. About 1 hour drive from the provincial capital Dak Lak, this...