Taking photos with lotus flowers without guests, leading to a loss of hundreds of millions of dong of the photography world.
The end of May and the beginning of June every year is the time when the West Lake lotus pond (Tay Ho district, Hanoi) blooms. This is also the beginning of the “bumper” season of photographers specializing in lotus photography at the request of guests. Every year, at this time, the area of ​​​​Tay Ho lotus pond is always crowded with people from early in the morning, the photography service is always overloaded, pulling many other services that are also very attractive such as car care, clothes rental, etc. makeup, soft drinks… Many people once said that, a year, they only look forward to the summer to “make money”, due to the large number of guests.

This year, however, the situation is completely different. Talking to VTC News, Ms. Van Anh, an employee of a famous photography studio with lotus photography packages with an address in Trung Liet, Dong Da, said that due to the COVID-19 epidemic, the studio lost 90% of its revenue. revenue compared to previous years. 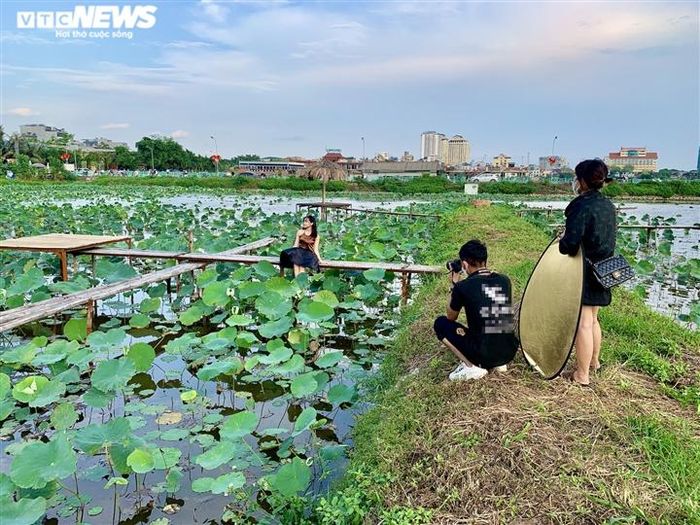 The lotus photography service lost hundreds of millions of dong because of the outbreak. According to Ms. Van Anh, every year when the lotus season comes, the studio serves about 30-40 visitors to take photos of lotus a day. On weekends, the number of visitors is even more crowded. The lotus photography package that customers often choose is the basic package for VND 699,000. Thus, each day the revenue from taking photos of lotus can reach from 20 to 29 million VND. This year, the epidemic broke out right in the lotus blooming season, so the photography service with lotus was stopped, almost no customers. “ It is estimated that the studio loses about 600-800 million VND in revenue from lotus photography service in a month “, said Ms. Van Anh. Thanh Nam, a freelance photographer, said that at the beginning of summer every year, he had to schedule a whole week to take photos of lotus flowers for guests. But this year, the lotus flower has bloomed, but no guests have booked an appointment yet. “ Even if someone booked an appointment, I had to make an appointment for them to finish the translation before taking pictures. But when will the epidemic end, while lotus blooms only have a season and do not last ‘, Nam said sadly.

Lotus flowers are in full bloom in West Lake, Hanoi but are absent from visiting. It is known that the price of a set of lotus photos of this photographer ranges from 400,000 to 600,000 VND excluding makeup and costume rental. In the lotus season, he takes pictures for about 2-3 guests every day. The epidemic caused him to lose millions of money every day. Mr. Chung, owner of a lotus pond in West Lake, where photographers often go to take photos of lotus for guests, shared: “ How much does it cost to sell lotus flowers, the income only depends on the photographer, but now the photographer doesn’t bring customers to take pictures anymore, it is considered a hungry year “. In addition to the income from the entrance fee collected by visitors when taking photos at the lotus lake, in previous years, Mr. Chung also opened a rental service for costumes on the spot, this service also brought a significant source of revenue. This year, in the context of the outbreak of the epidemic, these revenues are considered to be zero, causing the owner of the lotus garden to struggle and struggle. Only counting the entrance fee to the lotus garden, lotus pond owners like Mr. Chung lose millions of dong a day because of the epidemic. 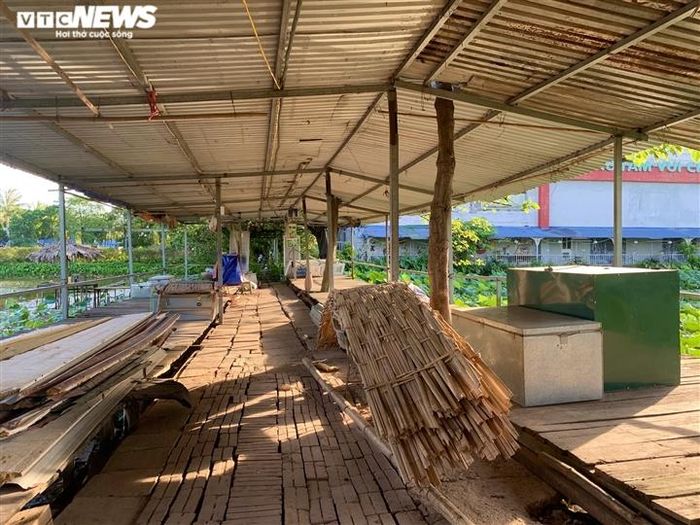 10 kiosks for renting costumes at the West Lake lotus pond are empty because there are no customers. Ms. Hoang Anh, the owner of a costume rental shop including camisole, ao dai, ba ba shirt… said that in previous years, in the lotus season, every day, customers asked to rent a camisole, every weekend they could earn it. million from this “follow-up” service. Her shop sometimes doesn’t even have enough items to rent to customers. However, this year almost no guests asked to rent anymore. On the way to the West Lake lotus garden, you can easily see street vendors selling both pink and white lotus flowers. Ms. Tuong, a seller, said that every year, at the beginning of the season, lotus flowers are expensive, selling as much as they can. Many customers buy each bunch of 10 flowers to make photo props. But this year, it’s much more sluggish, only 30,000 VND for the whole bunch and still no buyers.

Street vendors filled with lotus flowers at the beginning of the season. Mai, a customer who likes to take photos of lotus, shared: “For four years now, every year I take pictures with the West Lake lotus. There are years when you have to book an appointment with a photographer, making an appointment a week before it’s your turn. This year is the season, although I am very excited and know that if I take photos at this time, I will not have to jostle and compete, but due to the epidemic, I have to comply with the regulations on distance, so I have to wait for the epidemic to end before I can take photos.” .

10 breathtaking statues in the world

Uyên Hoàng - June 18, 2021 0
Around the world there are thousands of sculptures, some of which are the most famous, impressing with their unique creativity and enormous size. ...