The wife of the former member of the 1088 group does not deny that she loves her stepson more than her common child, and shares her husband’s opinion on this matter. 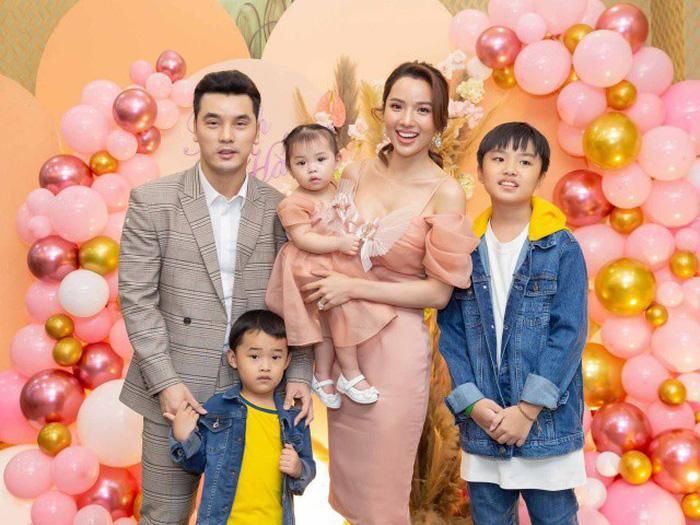 Male singer Ung Hoang Phuc and supermodel Kim Cuong are a couple of artists that got the attention of the media when they started dating in 2011, but did not go public until 2014, and then “went home” in 2015. However , until the end of 2018, the two had a grand wedding when they had the same 2-year-old son. At the end of September 2019, the couple continued to welcome their second daughter was born.

In addition to having two children with Ung Hoang Phuc, Kim Cuong also has a son, now 11 years old. Currently, the former supermodel has withdrawn from the catwalk to focus on taking care of her 3 children, taking care of and helping her husband manage the entertainment company. 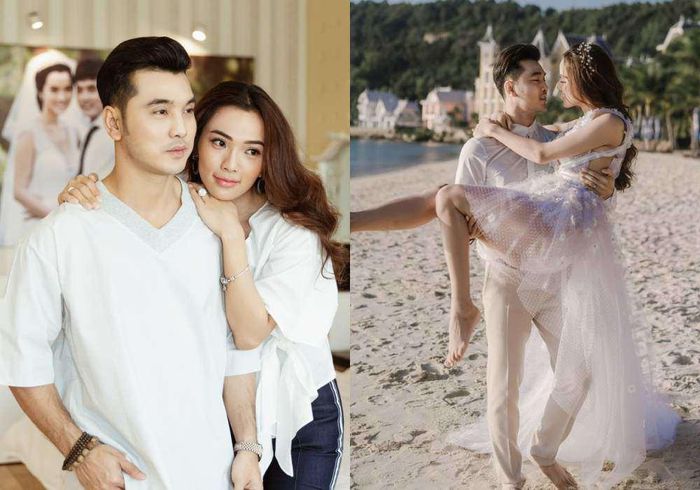 Ung Hoang Phuc and Kim Cuong started to get to know each other in 2011, after a year they “went home together”. 7 years later, the couple just got married when they had a child together. 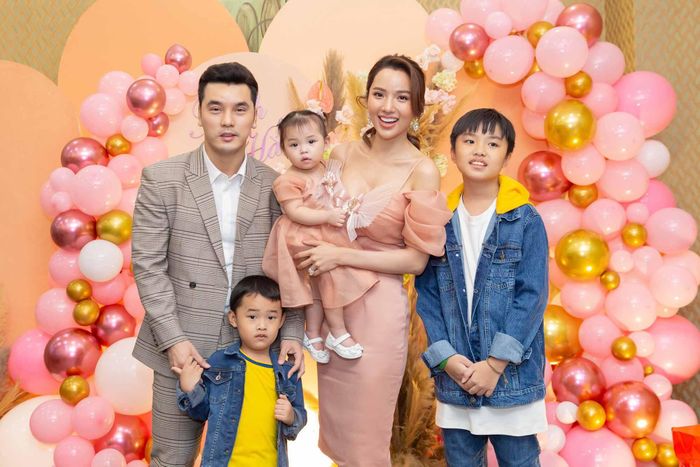 The current home of the couple with 3 children. In it, the oldest son is the stepchild of Kim Cuong.

Recently, a former member of the 1088 group shared a decade-long love story with his wife. He said that Kim Cuong used to confide in his love for his own children more than the common one. Before this sharing, the male singer did not hesitate, on the contrary, he wanted to do so because he understood that he had to suffer a disadvantage when lacking the love of his biological father. Ung Hoang Phuc himself always thinks that he needs to replace the child’s father to compensate for his love, so his responsibility is even higher.

In the recent event, Kim Cuong spoke more clearly about his husband’s previous comments. She explained: “Yes, from the past until now I love my own child very much. Because I feel that the baby is not close to father, so much compensation I want to give to the older child. Mr. Phuc also knows that and always supports I. I do not feel any problem because it is just your share.

My couple’s life is very peaceful like other families. I feel very satisfied. Probably due to their living environment and behavior, the harmony between stepchildren and common children from the beginning had clear orientations. Initially, I told him, I put children first. If you love me, I will come to you. I can’t for a certain love without thinking of my children. From the beginning, Mr. Phuc also understood that. 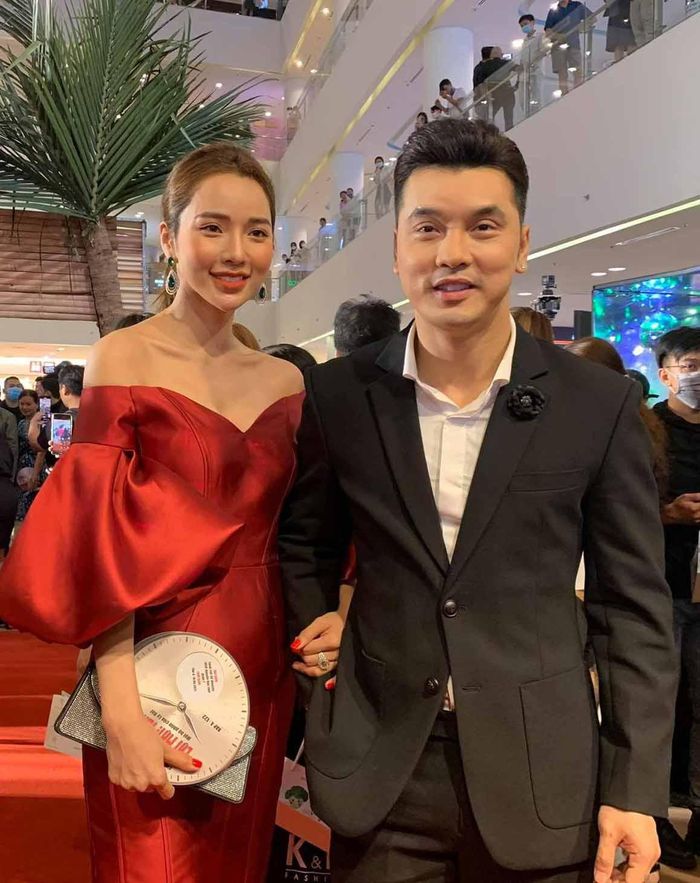 Ung Hoang Phuc and his wife appeared in the recent event.

Previously, Ung Hoang Phuc once said that the new time he got to know Kim Cuong, her step-son lived in the countryside with his grandmother. After both “go home together”, they will pick up the baby to live with. The male singer confided that at first, Kim Cuong’s stepchild seemed quite shy, timid and a bit afraid of himself. However, he also showed concern and closeness to the baby to gradually open up.

“To avoid feeling of separation, every day I take the time to ask questions and talk with the boy as a friend. As time goes by, my love for the baby is getting bigger and bigger without knowing it. The point came back to live with me, my wife’s stepchild slept separately Because she spent time with her grandmother in the countryside, she became independent very early, not sleeping with her anymore. like I robbed her mother. Maybe because I take great care of him and my treatment makes him not feel abandoned. Therefore, he is very excited for me “, I said. 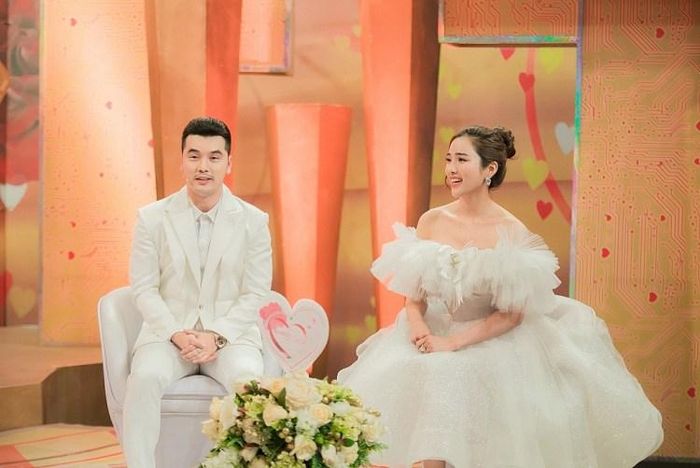 The couple used to broadcast on television about their marriage after a decade of being together.

According to Ung Hoang Phuc, Kim Cuong’s step-son lived with him and his wife since he was 4 years old, until now he is 11 years old. During the years together, he rarely scolded his wife’s stepchildren. Only when something happened between the children, did he stand to judge it fairly.

“At times like that, I often scold my own children first, make them apologize to him, so that they can see that I am not defending anyone. I know, children often bully the older ones, the older ones are gentle, love them, are obedient and obedient so I only give a few words. The behavior of older children also shows me how much he loves them. The bigger the baby, the more she feels like the biological son of Father Phuc “, Ung Hoang Phuc added. 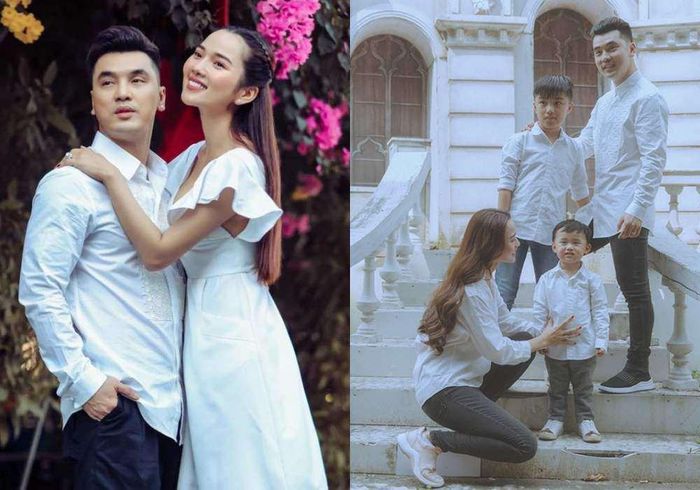 Ung Hoang Phuc pays much attention to his wife’s own son.

The male singer also revealed that when the boy’s biological father is still indifferent, he only calls once in a while. Therefore, he always takes care, talks and cares for his wife’s stepchild. When it comes to the children growing up, they will probably discern who the parents care more about, the male singer affirmed: “If there is a conflict between the children in the future in distinguishing the love of the parents, I will handle it as fairly as possible.

According to Kim Cuong, after 3 births, the family had enough both boys and girls, so she and her husband decided not to have more children. The former supermodel said that in the family, her husband loves his youngest daughter because she is always clinging to her father.

Ung Hoang Phuc himself admitted: “My daughter must wear me, I think constantly, so I have time to be close, to each other, to love each other, more time together. Definitely not very biased towards the two of you (laughs). Usually in my house is People are soft, pamper the kids, you should let the mother teach them better My responsibility is like a guard, keeping the kids from getting caught up in another. And scolding the wife so that she will scold her. better”.