Home Tech Why is the rose thorny?Scientists put forward a new hypothesis of the... 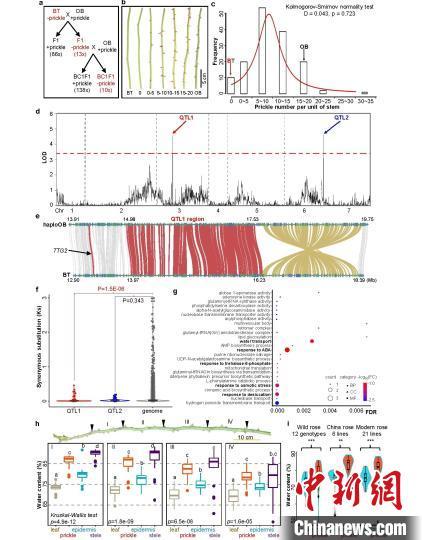 The picture shows the research results.Photo courtesy of Kunming Institute of Botany, Chinese Academy of Sciences Chinanews.com, Kunming, May 24 (Reporter Hu Yuanhang) Why does the rose have thorns? This is a topic that has not been systematically and clearly resolved for a long time in the scientific community. Based on genomic and genetic analysis, a research team led by the Kunming Institute of Botany, Chinese Academy of Sciences, proposed a new hypothesis of the function of “spur water storage”, which filled the gaps in the early functional research of skin thorns. Related research results were published online in the comprehensive journal National Science Review with the title “A genomic link in China roses: and they all lived prickly but water deficient ever after?”. Prickles refer to sharp protrusions formed on the epidermis or cortex of plants. They are usually considered to be the defensive adaptive tissues of plants to protect plants from animals, pathogens or mechanical damage. The “thorny rose” reminds people that although a rose is beautiful, beware of its thorns. Many plants such as Rosaceae, Leguminosae and Rutaceae have prickles on their stems, leaves and fruits, but the function of prickles in the early developmental stage has not been revealed yet. The genetic mechanism and ecological significance of prickles development of the rose genus of Rosaceae native to China have not been systematically and clearly analyzed for a long time. 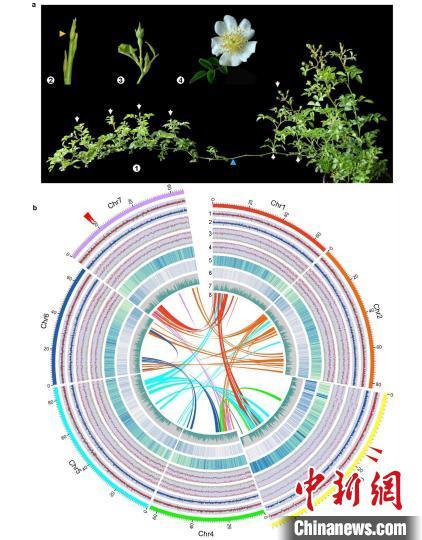 The picture shows the research results.Photo courtesy of Kunming Institute of Botany, Chinese Academy of Sciences Recently, the plant molecular genetics and adaptation research team of the Kunming Institute of Botany, Chinese Academy of Sciences has cooperated with the Southwest China Wildlife Germplasm Bank and the Yunnan Academy of Agricultural Sciences team to use the ancient Chinese rose thornless leaf rose (Rosa wichuraiana Basye’s Thornless, BT) and Moon powder (R. chinensis Old Blush, OB) and its hybrid F1 and backcross BC1F1 generation genetic populations are used as test materials. Comprehensive use of comparative genomics, molecular genetics and evolutionary biology methods to analyze the genetics of rose thorns Regulation mechanism. The research team first used scanning electron microscopy to compare the early development of BT and OB prickles and found that the lack of BT prickles may be an abnormality in the initial ability of prickly development. After two consecutive years of phenotypic analysis based on the F1 and BC1F1 generation populations of BT x OB, it was found that the heredity of rose thorn density was incompletely dominantly controlled by four genetic loci, and finally two loci were mapped. In order to gain a deeper understanding of the genetic regulation mechanism of rose thorn development, the team constructed a high-quality reference genome at the diploid BT chromosome level, conducted a comparative genomic analysis of BT and OB, and found that the thorn density may be related to water adaptation. To further explore this hypothesis, the team also conducted a series of physiological tests on 41 genotypes of rose. Compared with the epidermis and leaves, the prickles of the old branches can be more water-enriched, and the degree of enrichment is higher in the young prickles; the moisture content of the prickles in the older branches is significantly reduced; this phenomenon is not only It appears in modern cultivated lines and ancient Chinese rose germplasm, and it is also consistent in wild roses and other materials. Based on this, the research team puts forward the hypothesis that the young skin spines are likely to have a water storage function. “Although this hypothesis requires more genetic evidence, it completes the chain of research on the biological functions of prickles: that is, young prickles are mainly used for water storage, while mature prickles are mainly used for defense and water loss. “Scientists said that this research not only promotes the analysis of the genetic mechanism of rose thorn development, but also facilitates the development of rose biology and the cultivation of new germplasm, but also provides a new understanding of the production and maintenance mechanisms of new plant traits. Perspective. (Finish)