Home Business After the Dragon Boat Festival, A shares have fallen. How to grasp...

On June 15th, the three major A-share indexes rebounded slightly after falling in early trading, and then maintained a low and volatile trend, and the decline narrowed. As of the close, they all fell by about 1%.

In terms of sectors, the electronics and automotive sectors bucked the market and rose, while the leisure services and non-ferrous metals sectors fell by more than 3%.

After the Dragon Boat Festival, the rainy season rained and wet the A shares. The high shock before the holiday was “inspiring”, and the plunge after the holiday was “sad”. On June 15, the first trading day after the Dragon Boat Festival, the performance of A shares was “unsatisfactory.” The two markets traded over one trillion yuan, and large market value stocks plummeted significantly.

What is the main logic of the A-share market opening on the first day after the holiday? From the perspective of fundamentals, valuation, liquidity, etc., what is the expected A-share market in the second half of the year? How to choose between large, medium and small market value and sectors?

“International Finance News” reporter interviewed several industry insiders. In their opinion, the current A-shares do not have the conditions for the index to rise sharply, and the hotspots collectively fell again, and the index continued to wash up and gather momentum. The upward momentum of the economy is still weak, liquidity is restricted, and equity market valuations are not low. In the second half of the year, income expectations should be lowered.

On June 15th, the three major A-share indexes rebounded slightly after falling in early trading, and then maintained a low and volatile trend, and the decline narrowed. As of the close, they all fell by about 1%. The Kechuang 50 Index bucked the market and opened higher and then fell back to close up.

In terms of popularity, the turnover of the two cities exceeded one trillion yuan, a slight decrease from the last trading day before the holiday. The net outflow of Beishang capital was 5.2 billion yuan, mainly reducing its holdings of WuXi AppTec, Zijin Mining, Ping An, etc., each of which exceeded 500 million yuan; Beishang capital also “started” Yanghe shares and BYD, and the net sales were about approximately 300 million yuan.

What is the main reason for the market decline after the holiday?

Qianming Asset Management Fund Manager Bai Yi analyzed to a reporter from the International Finance News that today’s market’s hot cyclical stocks and the concept of Hongmeng fell collectively, and the bull market trend sector securities also appeared to sell off. The deep-seated logic is that there are currently no conditions for the index to rise sharply, and the hotspots collectively fell again, so the index continues to wash up and gather momentum.

“The Shanghai Index fell below the 20th line on the first day after the Dragon Boat Festival, which exceeded most investors’ expectations.” Liu Youhua, head of research on private equity rownets, also told reporters that in terms of popularity, the turnover of the two markets still exceeded one trillion yuan. , The market is still hot, but structural opportunities are more difficult to grasp. In terms of liquidity, over-issuance of foreign currencies has led to global inflation expectations, while the continuous appreciation of the renminbi has led to continued inflows of foreign capital. This expectation will still exist in the second half of the year. From the perspective of individual stock fundamentals, the profitability of most individual stocks has improved, and the semi-annual report will be the focus of the market.

Wang Jiang, general manager of Yuanrong Investment’s stock department, said in an interview with a reporter from the International Finance News that the market tends to choose the direction of least resistance in the short term, which has a certain degree of randomness. On the macro level, the market focuses on US employment data. If employment is weak, the expected contraction of the balance sheet will be delayed, which is conducive to the stability of the valuation level. However, as time goes by, the window of desensitization of inflation data and employment data has not yet recovered is being consumed, and as the Fed’s interest rate meeting approaches, the market will inevitably be worried. “As far as the second half of the year is concerned, there are macro variables, and the current equity market valuation is hardly cheap, and it is reasonable to reduce income expectations. In terms of sectors, the optional consumption branch in the increase in penetration rate and the disturbance of raw material prices The sub-manufacturing sectors that have little real impact can be paid attention to.”

How to switch between large and small market capitalization opportunities

How to choose large, medium and small market capitalization stocks in the second half of the year?

Lang Chengcheng, director of the research department of Furong Fund, bluntly stated to the reporter of “International Finance” that the market was mainly high and volatile last week, and structurally small and medium-sized market capitalization companies rose at the top. In fact, since May, from the rotation of large market value companies to small and medium market value companies, both types of companies have seen a certain degree of rise. The core logic is to restore the pessimistic expectations of liquidity. “As the semi-annual report and the 100th anniversary of the founding of the party approach, the round of rising prices may have reached the middle and late stages, and market volatility will increase. Small and medium-sized market value companies under the catalysis of the theme should be treated with caution.

“In the short-term, it is recommended to moderately control the investment rhythm, and be optimistic about low-value banks and some cyclical leaders; in the medium and long term, performance growth is still the core main line, and we are optimistic about the high-period cycle of electronics and electronics.” Lang Chengcheng further analyzed, economic fundamentals. Financing data reflect that the upward momentum of the economy is still weak, the scale of new social financing has fallen sharply year-on-year, and the year-on-year growth rate of the stock of social financing has also continued to decline. The South China Industrial Products Index has risen to a high level again. Last week, the US CPI rose by 5% year-on-year in May, exceeding expectations and setting the largest increase since August 2008. However, the yield of Treasury bonds has continued to decline since then. Compared with inflation, the Fed pays more attention to employment and economic recovery, focusing on the Fed’s interest rate meeting this week.

Institutional view: not overly optimistic in the second half of the year

In terms of sectors, cyclical stocks such as steel, mining, chemical, non-ferrous metals and other cyclical stocks ranked first in the year’s component range (total market value weighted average), with a rise of more than 14%; non-banking finance, defense and military industry, and household appliances all fell more than 11%. 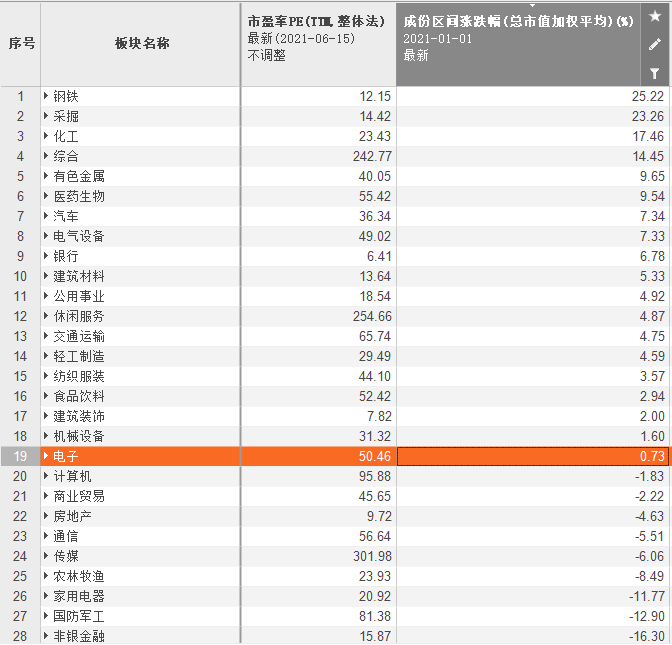 How to choose sector investment in the second half of the year?

Chen Li, chief economist of Chuancai Securities and director of the research institute, predicts that in the second half of the year, sector rotation will become more frequent and structural differentiation will continue. Unlike last year’s single valuation drive and the dominant performance drive in the first half of this year, the market in the second half of the year will no longer be a competition among various industries, and more inclined to comparisons within the industry, with low internal valuations and growth rates. The fast company will become the leader, and vice versa, it will continue to fall. For example, the growth of mid-to-high-end liquor in the liquor industry is expected to have strong certainty; under the background of “carbon neutrality”, the new energy industry is expected to diverge, focusing on both the technological path and cost advantages; Pay attention to the three links.

Looking ahead to the second half of the A-share market, the strategy team of Ping An Securities predicts that the overall market will fluctuate upwards in the second half of the year, and will lay out structural opportunities for growth styles. The economy is basically facing the upward pressure of the market, and there are corresponding constraints on liquidity. However, continued favorable policies and funding levels in the second half of the year are expected to continue to increase risk appetite. Equity valuation is not overly optimistic from the perspective of equity-bond yield ratio and earnings expectations. . It is recommended to pay attention to the proliferation of new energy vehicles, new energy, semiconductors, new chemical materials, biomedicine and other industries, as well as the proliferation of investment opportunities for more companies in the high-prosperity industry chain.

editor - April 17, 2021 0
The logistics industry in Germany is surprisingly well with the pandemic. Many companies are even pointing to growth. However, challenges also await. By...