These two strange stories made the mourners bewildered and left countless rumors.
On November 15, 1908, on a dreary, gloomy afternoon, Empress Dowager Cixi – who held the real power of the Dai Thanh court took her last breath, unwillingly but closed her eyes.

Pu Yi was only 3 years old at that time, crying loudly, the Qing court was in turmoil, ending the legendary life of a controversial woman in Chinese history. So why did the woman with the power of the tide die a year before she was buried, and on the day of the funeral, there were many strange phenomena, could everything be foreshadowed? When Empress Dowager Cixi died, the Qing court was extremely precarious, the West constantly swept and invaded, and the Qing government did not stop cutting the land for compensation. The Qing Dynasty’s treasury was soon empty, the gods and the foolish feudal people were still confused and engrossed in the dream of the kingdom of heaven, making them unable to keep up with the changes of the times, the arrangement of The funeral of King Quang Tu and Empress Dowager Cixi caused great headaches to the ministers, because according to royal rites, the Queen Mother could not be buried at the same time as the Emperor. Everyone knows, the time of death of King Quang Tu and Empress Dowager Cixi was only about 20 hours apart, although while living, Empress Dowager Cixi was extremely powerful, but until she died, she still had to be ranked behind the puppet Emperor. Quang Tu. Therefore, Empress Dowager Cixi’s funeral was forced to be postponed. The funeral of these two people has to spend a large amount of money, the funeral supplies, funeral supplies, funeral rituals all need a long time to prepare. At that time, King Quang Tu’s funeral was held in a hurry and was also very simple, but before his death, Empress Dowager Cixi set strict requirements for her own funeral. Because it took a year for the funeral to take place, so the preparation time was a lot, and it was also extremely expensive. 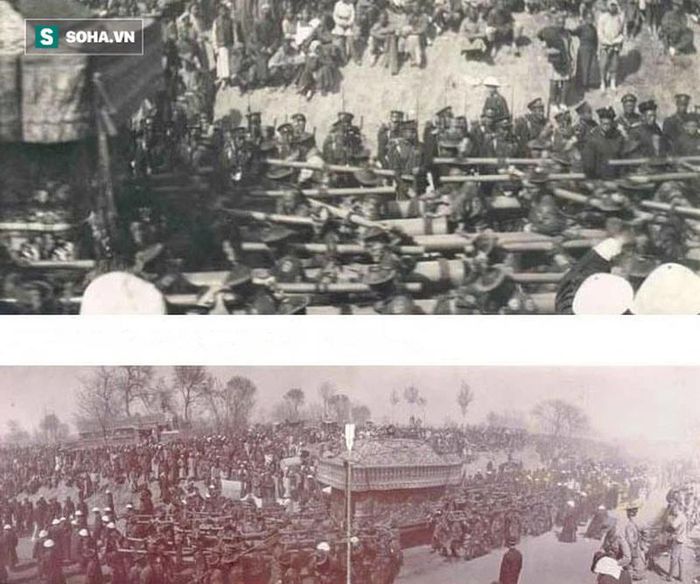 The image of the extremely grand funeral of Empress Dowager Cixi. The Qing court at that time was extremely weak, the Qing aristocracy felt that the more at times like these, the more they could not be looked down upon by Western powers, and had to protect their majesty and face. of the Dai Qing court, so the great ministers spent a lot of time preparing for the funeral of Empress Dowager Cixi. During his lifetime, Tu Hi was very fond of luxury, and also loved to collect all kinds of rare treasures such as pearls, onyx…; The strange treasures buried in her coffin are worth hundreds of millions of taels of silver. When she was alive, Empress Dowager Cixi lived in luxury and wastefulness, until her death, she still did not change her extravagant and luxurious style, taking away 1/5 of the fortune from a Dai Thanh who was on the verge of bankruptcy. withered. It is rumored that, when she died, on her head, Empress Dowager Cixi wore a phoenix hat with precious gems, this gem weighed 4 taels, as big as a bird’s egg, worth up to 100,000 taels of silver, this amount was enough to fostering the entire Beiyang fleet, it was both pitiful and ridiculous. At that time, the Qing Dynasty modernized the military, but they all lacked military expenses, and their military strength compared to other countries was extremely backward. A year later, in the burial scene of Empress Dowager Cixi, the ritual was held like a monarch, with 128 people making coffins and votive goods, countless, no different from the yin soldiers who paved the way. The funeral procession includes the royal family, the great ministers, also nearly 8000 people, the size of the funeral team is extremely solemn, marching on the main road for 5 days and 5 nights. Foreign reporters stood on the observatory, curiously watching the large funeral procession, but in the midst of that monumental scene, two very strange things appeared. 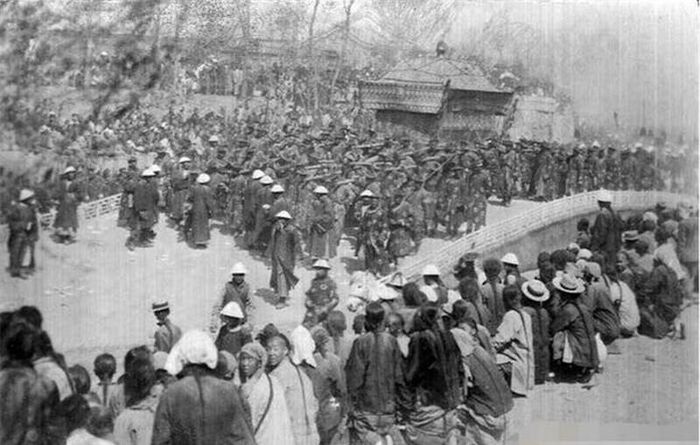 The picture was taken on the day of the funeral of Empress Dowager Cixi. 2 strange phenomena appeared on the day of mourning for Empress Dowager Cixi The first is that wherever the funeral procession passes, there is a constant stench. This sudden stench caused the people to kneel and put their hands over their noses. In addition, the coffin-carrying team also discovered that there was blood flowing from the coffin, which eunuch Ly Lien Anh couldn’t wipe it off. This strange incident made the funeral procession afraid and restless, many people said that the stench emitted was because the body had been left to rot for a year, but there was no evidence for everything. Since ancient times, China’s techniques to protect the body from decay have been extremely perfect, as the old Buddha of Dai Thanh, her body must be preserved carefully, no matter what. no matter what, surely do not let Empress Dowager Cixi’s body rot. Until 20 years later, when the warlord Sun Dien Anh excavated the tomb of Empress Dowager Cixi, the face of Empress Dowager Cixi was still seen as lifelike, as if she was still alive, this proves that the Empress Dowager Cixi’s body had not yet rotted. If so, the rotten smell of mourning could not have emanated from Empress Dowager Cixi’s coffin. Later people speculated that the people rumored that the stench carried both a curse and a complaint against Empress Dowager Cixi when she was alive for doing harm to the country, and after her death, the bad reputation would still be passed on. thousands of years later, spreading resentment and resentment towards Empress Dowager Cixi. As for the bloody coffin, it is even more mysterious, some say it is a harbinger of heaven, moreover, a bad omen, foreshadowing the decline of the Qing court. Sure enough, it wasn’t long before the Qing dynasty fell. The eunuch Ly Lien Anh felt that this incident was too strange, so he sent an investigator to finally find out the cause. The reason is that the coffin placed in the palace before being buried must also go through many stages, including the stage of incense burning. 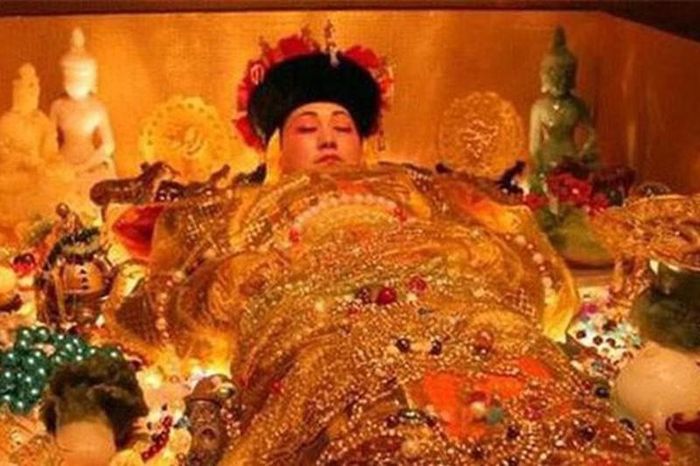 The image of Cixi’s body next to countless valuable burial objects. Illustration. Incense incense is mainly used to prevent termites and insects, but who would have thought that the person in charge of incense burning for the coffin would carelessly take the wrong type of incense, taking the type of incense called “rat poison incense” to burn the coffin. by Empress Dowager Cixi. This type of incense attracts mice to focus, when smelling it a lot, it will cause the mouse’s senses to bleed. The scent in Empress Dowager Cixi’s coffin attracted the rats, when they entered the coffin, they smelled a large amount of this poisonous smell, so they vomited blood and died. . The cause of the incident that frightened many people was just such a mistake, which made people half believe and half doubt. But it must also be said that in the midst of the dark, scary funeral procession, such strange things happened, indeed, there were many associations, even though Empress Dowager Cixi’s funeral was solemn and popular. however, could not stop the people’s constant reproaches with this ruler. As Empress Dowager Cixi’s soul gradually drifted away from her coffin, the echoes of the fall of the Qing Dynasty drew closer and closer, eventually being drowned out by the guns of Western invaders. Twenty years later, posterity greedily stares at the treasure in Empress Dowager Cixi’s tomb like a hungry tiger stalking its prey. Military leader Ton Dien Anh led a group of people carrying explosives to blow up the entrance to the mausoleum, causing people to stutter, they followed through the zigzag paths to the coffin in the center of the mausoleum, stealing all the gold. silver and jewels in it. Rumor has it that because there are so many treasures, it took this group of dozens of people 7 days and 7 nights to bring all these treasures away. The well-preserved body of Empress Dowager Cixi also withered and withered the moment the coffin lid was flipped open. 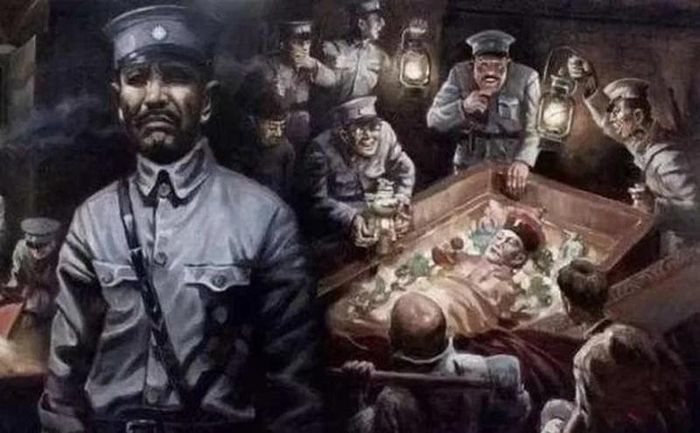 Illustrations. A powerful empress dowager like Cixi was also humiliated like that. The grave robbers were absorbed in the pile of gold and silver, but did not realize that the body of Empress Dowager Cixi had been thrown out the door, her face buried in mud. The famous Empress Dowager for a while did not expect to die for a few decades and still cannot rest. After the theft of Empress Dowager Cixi’s tomb happened 40 days ago, Emperor Pu Yi hurriedly reburied Empress Dowager Cixi, only this time it had to be greatly simplified. Rumor has it that, when she was buried in the mouth of Empress Dowager Cixi, she took a nightingale pearl, which is extremely rare and has great value. After being taken away by the grave robbers, they passed from one person to another and then gave it to Tong My Linh. Tong My Linh was very interested and used it as a decoration inlaid on shoes, but unfortunately, there was no news of this night pearl in the world anymore. After her death, Empress Dowager Cixi brought many treasures with her, but in the end she still fell into the end with two empty hands, the power to cover the sky is just like the wind blowing clouds, the pearl has a value associated with it. The latter also fell into the hands of others. If the tomb of Empress Dowager Cixi did not initially contain so many jewels, it probably would not have attracted the greedy eyes of thieves. A once-powerful woman with a unique aura, after 20 years of death, it was only a mess, the tomb was exploded and split after five years, it was also accidentally covered by history, finally. became the subject of the story of the afterlife and the fanciful thoughts of posterity.

Diên San (Tổng hợp) - June 19, 2021 0
Massachusetts Institute of Technology (MIT) is working on an efficient manufacturing method for a graphene-based chainmail bulletproof armor, which could potentially give the military...