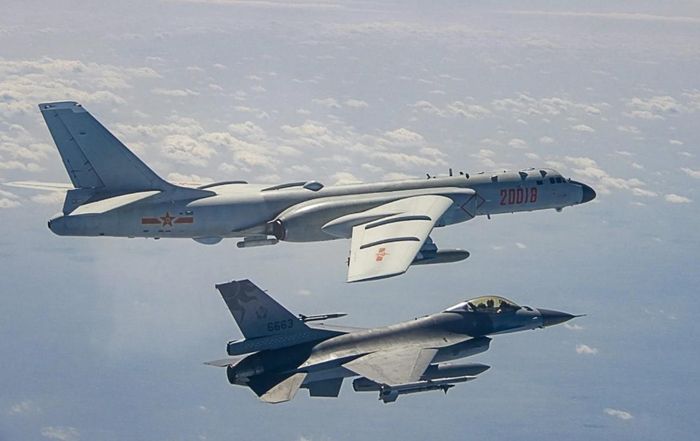 A Taiwanese fighter jet closely follows a Chinese bomber over the Taiwan Strait in February 2021 (Image: SCMP) According to Taiwan, these military aircraft include many fighter jets and bombers capable of dropping atomic bombs. This is considered the largest airspace crossing of China that Taiwan has recorded so far. Although there has been no comment from Beijing, according to Reuters, this information comes after G7 leaders issued a joint statement last Sunday in which they criticized China for a series of issue, emphasizing the importance of peace and stability in the Taiwan Strait. Beijing later condemned the joint statement as “defamation”. Over the past several months, Taiwan has continuously released information about a series of incidents of Chinese air force entering its airspace, mainly concentrated in the southwest area of ​​the air defense identification zone. The most recent incident involved 14 J-16s, six J-11s, and four nuclear-capable H-6 bombers, along with anti-submarine and electronic warfare aircraft. and early warning; according to the Taiwan Defense Agency. The incident has just been reported to be the largest-scale incident since Taiwanese authorities began publicly reporting violations of their ADIZ since last year, breaking the previous record of 25 Chinese aircraft. entered Taiwanese airspace on April 12. Taiwan’s Defense Ministry added that its fighter jets were deployed to intercept and repel the Chinese aircraft, while missile systems were deployed at the ready. The Chinese Ministry of National Defense has not yet commented on this information. China has previously asserted that such missions are necessary to protect the country’s sovereignty and deal with “collusion” between Taipei and Washington. The United States, like most countries that do not have formal diplomatic relations with Taiwan, keeps a close eye on events that raise tensions with Beijing.

editor - June 17, 2021 0
For patients with polycystic pregnancy, don’t blindly promote the excretion. Accidentally it hurts and hurts the body.In recent years, many polycystic patients have...