Southern Metropolis Reporter Huang Liangdong On the evening of June 15, Dongpeng Beverage issued an announcement stating that as of June 15, the company’s closing price was 209.1 yuan.At present, the company’s stock price has seriously deviated from the company’s fundamentals.SignificantHigher than the industry average, there is a risk of higher valuation. Since its listing on May 27, Dongpeng Beverage has harvested 13 consecutive daily limit. Prior to this, the company has issued two risk warning announcements on the abnormal fluctuations of the stock price’s consecutive daily limit.

Dongpeng Beverage said that from 2018 to 2020, the income of energy drinks accounted for more than 90% of the company’s total income. The product structure is relatively single, and the operating performance is highly dependent on the sales of energy drinks. Can it continue to respond to market changes in a timely manner in the future? There are certain uncertainties and risks. In addition, the company also has the risk of a relatively concentrated sales area, the risk of intensified market competition, and the risk that the promotion of new products falls short of expectations.In view of the recent fluctuations in the company’s stock price, investors are invitednoterisk. 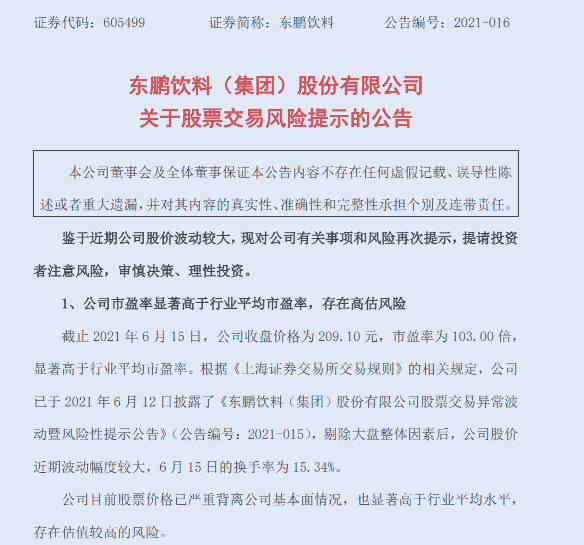 Dongpeng Beverage is at risk of overestimation

P/E ratio is much higher than the industry average

As of June 15, 2021, the company’s closing price was 209.10 yuan, and the P/E ratio was 103.00 times, which was significantly higher than the industry average P/E ratio. In accordance with the relevant provisions of the “Shanghai Stock Exchange Trading Rules”, the company has disclosed the “Announcement on Abnormal Fluctuations in Stock Trading and Risk Warnings of Dongpeng Beverage (Group) Co., Ltd.” on June 12, 2021, after excluding the overall factors of the market , The company’s stock price has fluctuated greatly recently, and the turnover rate on June 15 was 15.34%.

Dongpeng Beverage said that at present, the company’s stock price has seriously deviated from the company’s fundamentals and is also significantly higher than the industry average. There is a risk of higher valuation.

And the concentration of sales area and other risks

From 2018 to 2020, Dongpeng Beverage’s Guangdong regional sales revenue accounted for 61.10%, 60.12% and 55.74% of the company’s main business revenue, respectively. The company’s operating results depend to a certain extent onThe districtMarket conditions in the domain, ifThe districtChanges in consumer consumption habits in the domain will have a certain impact on the company’s future profitability.

After years of development, my country’s energy drink industry has a relatively high degree of marketization, and well-known brands such as Red Bull, Dongpeng Special Drink, Lehu, Physique Energy, and Warhorse have been formed.With the rapid development of the industry, in recent years, some well-known companies have launched new energy drink products, such as Goo Ran under Uni-President, XS under Amway, and Yili underWake upThe competition is fierce. In the future, whether the company can continue to maintain its competitive advantage in the market and whether it can continue to respond to market changes in a timely manner remains uncertain and risky.

In recent years, the company has launched new products such as citrus lemon tea and Chen Pit drink, which has further enriched the product line. Although the new products launched by the company will undergo strict internal analysis and demonstration, preliminary market research and regional pilot projects, there may still be a risk that the new products are not fully recognized by the market.

At the same time, since new products usually require a certain amount of incubation time, more resources need to be invested in advertising, marketing and consumer promotion in the early promotion process. Therefore, some products may have lower profit margins during the incubation period. If the promotion of new products is effective Less than expected, it may have a certain impact on the company’s future operating results.

editor - April 16, 2021 0
At the start of the Hanover Fair, the important industry associations presented their forecasts for business in the current year. You expect a gradual...