In the western districts of Ha Giang province, people work diligently, creating terraced fields, which not only contribute to food stability but also create a unique tourism product in the ripe rice season.
Man’s creation

Cultivating terraced fields in Hoang Su Phi. Photo: Duc Long Hoang Su Phi is a district located in the west of Ha Giang province. From Ha Giang city, it takes about 3 hours to reach Vinh Quang town – the capital of Hoang Su Phi district. Setting foot in Hoang Su Phi land, visitors will be immediately attracted by the terraced fields of harvest, golden sunshine like honey, beautiful scenery like in fairy tales. Then there are cultural festivals imbued with national identity, very strange, wild and strangely attractive. Hoang Su Phi land is located on the ground with an average altitude of 800m above sea level. Here, the terrain is strongly dissected, high mountains, deep valleys, many streams, primeval forests … very suitable for the development of various types of adventure tourism, discovery tourism. Hoang Su Phi also hides in her a unique cultural treasure of ethnic minorities such as Dao, Mong, Nung, Clao, La Chi. In addition, referring to Hoang Su Phi, people immediately think of terraced fields stretching like stairs to the sky. A rare masterpiece in Vietnam’s wet rice civilization was created by human hands to adapt to the soil, climate and irrigation conditions bestowed by nature. The terraced fields were formed in the process of natural improvement, expanding the wet rice cultivation area of ​​ethnic minorities living throughout the Hoang Su Phi strip of land. Through the survey, most of the ethnic groups living in Hoang Su Phi district have mastered the technique of terraced farming such as La Chi, Tay, Nung, Dao… However, each ethnic group has its own experiences. different techniques and experiences.

Hoang Su Phi terraced fields in flood season (flood season) Hoang Su Phi has a strongly dissected terrain and steep slope, so the people cannot grow rice by shifting cultivation, but instead, they have to take advantage of low hills, wide areas, and moderate slopes. Right, taking advantage of both rain water and spring water leading from high altitudes to low fields to form terraced fields. The exploitation of terraced fields requires appropriate techniques and terrain. Depending on the terrain and topography of each region, the fields are wide, narrow, long, short, high, and low. In the past, through each production season, households who found that there was a shortage of arable land would choose in the family’s forest and shifting fields the most suitable location, closest to the water source, to develop into fields. Currently, because the land is less and less, the most fertile land has also been cleared into terraced fields, the choice of land does not require as many requirements as before. The government’s policy of land allocation and forest allocation also somewhat limits the choice of places to exploit for farming. Usually, if the previous year’s hill area is cleared and the land is still there, they will continue to do it, when the land runs out, they will find another hill to explore. When families have a need to explore new fields, they will gather together to do the work in exchange. The farming season of the Dao people in Ban Luoc and San Sa Ho communes usually starts right after the Tet holiday, while the La Chi people in Ban Phung commune open their fields in the rainy season, from April to September of the lunar calendar. Before proceeding to renovate the field, they also need to carefully calculate the length and width of the field, the low altitude between the fields, the location of the water channels, the way to conduct the water … effort, time consuming. Usually they will ask elderly people who have experience in clearing fields to take care of the design of the fields. The selection of farming sites is carefully conducted by the local people. The area that meets the requirements must be a place where the soil is loose, fertile, without big rocks, formerly a primeval forest. The slope of the land is not large, it is possible to create a wide and long field. The most important thing when choosing land to exploit is that in the area or nearby there must be a source of water, a place where water can be brought to the field easily and without much effort. Once the calculations are done, get to work. The first is to create a field surface, the tools to exploit the field are very simple, only a hoe, a pickaxe, a wooden harrow and a knife. The process of clearing the field is started from the highest place to the lowest. Depending on the topography and slope of the hill, the height and width of the terraces are also different. Once the ground is available, they proceed to embankment and then bring water to soak the field feet. Usually, it is not until the next year’s crop that they start plowing. For the Red Dao people in Ho Thau commune, they subtract a small area of ​​forest around the field for each area of ​​the field to keep the land from landslides; while the La Chi in Ban Phung commune keep the top layer of soil. After clearing the field, they spread that layer of soil and cultivate it right away. In order for the fields to be shaped, shaped, can be cultivated and ensured productivity, the farmers in Hoang Su Phi have spent many days in the rain. The work of cultivating the fields is continued by the ethnic people here from year to year, from generation to generation, creating the slopes of the fields like monumental art paintings hanging on the hillsides. The industrious and creative labor of the people of Hoang Su Phi has helped to make life full and create a beautiful picture of nature. The golden rice mats in the shape of raspberries, streams, and winding rivers continue to stretch to the horizon. From his labor, the farmer drew a beautiful picture of nature from the song of breaking the ground. Developing tourism associated with the heritage of terraced fields 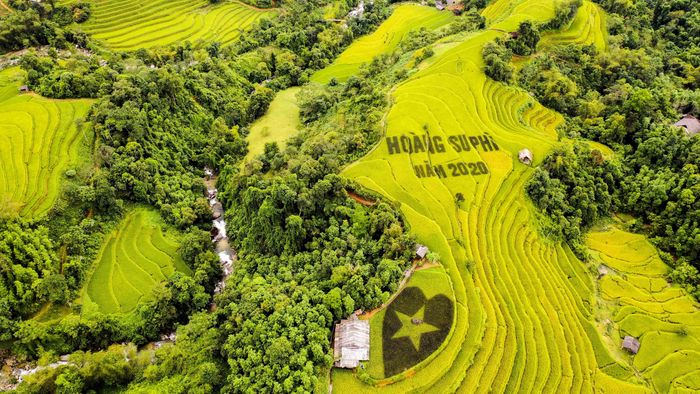 Hoang Su Phi terraced fields in the ripe rice season. Photo: Duc Long Mr. Then Ngoc Minh, Chairman of the People’s Committee of Hoang Su Phi district said: The terraced fields in Hoang Su Phi not only ensure food for the people but also create an attractive tourist product, because of its high aesthetic value and high aesthetic value. rich in art. In recent years, not only encouraging, mobilizing and supporting farmers to get rich on terraced fields by measures, such as: Bringing new high-yield rice varieties into production, planting winter crops; At the Party Committee level, the government of Hoang Su Phi district also promotes tourism development based on the available potential as the National Monument of Terraced Fields. “In order to promote the full value and create different tourism products, in the coming time, Hoang Su Phi district will create many conditions to attract and promote investment in community tourism in the terraced fields or areas. specific products associated with people’s agricultural cultivation, such as: Water season; encouraging the planting of specialized crops or the same type of rice to have the same ripening time, harvest time… At the same time, the district also focuses on investing in transport infrastructure, projects related to terraced fields, Key projects with the emphasis on terraced fields such as paragliding grounds, check-in points, stopovers, terraces sightseeing spots …”, Chairman of the District People’s Committee Hoang Su Phi, Then Ngoc Minh affirmed. Up to now, Hoang Su Phi has over 3,720 hectares of terraced fields spread throughout 24/24 communes and towns. In 2012, terraced fields in 6 communes (Ban Luoc, San Sa Ho, Ban Phung, Ho Thau, Nam Ty and Thong Nguyen) of Hoang Su Phi were certified as a National Monument by the Ministry of Culture, Sports and Tourism. family. By 2017, 5 more communes (Ta Su Choong, Ban Nhuong, Po Lo, Thang Tin, Nam Khoa) were added to the list of terraced fields in the heritage area. The whole district has over 2,196 hectares of terraced fields in the protected heritage area. From value and promotion, the image of Hoang Su Phi terraced fields is now not only limited to domestic but also international. For many years now, foreign tourists have known Hoang Su Phi through the path of travel and discovery, especially discovering and experiencing the heritage of terraced fields. However, for terraced field tourism in Hoang Su Phi to develop sustainably and create long-term livelihoods for local people, the locality wants the province to continue to have orientations to guide tourism development; pay more attention to the investment in facilities so that the locality can focus on developing tourism in the direction of agricultural tourism, community tourism combined with preserving the national cultural identity to attract tourists. .

Song Phúc - April 20, 2021 0
Imageically referred to as the 'sea end city at the end of the river', this place has a romantic river flowing in the middle...