Home Tech Is the ‘transforming’ application Voila AI Artist as dangerous as FaceApp?

App that converts faces into cartoon characters is causing fever on Vietnamese social networks and many countries. Users need to understand before deciding to install this app.
Recently, the photo editing application Voilá AI Artist has become a trend on social networking sites, similar to last year’s FaceApp trend. The trend of “transforming” into cartoon characters is not only causing a fever in Vietnam, the Voilá AI Artist application has had more than 8 million downloads globally, according to data from an analytics company. Sensor Tower .

This tool supports editing user photos into animated characters of Pixar or Disney. Although there are no controversial, worrying terms like FaceApp, Voilá AI Artist still has certain conditions for users. How much does it cost to use Voila ? Application “transform” Voilá is a photo editing tool that is free to download on iOS and Android. This app helps users turn their photos into hand-drawn caricatures, cartoon characters or a Renaissance painting. This application only allows 3 days of free use, before the screens and conditions for collection appear. Specifically, the Voilá Pro package costs $2/week on Android and $3/week for the iOS version. To use the app for 1 year, the developer has more preferential packages such as 21 USD / year for Android or 30 USD / year on Apple devices. Paying users will get rid of ads, speed up image processing and unlock other features like removing the app icon from the image when exporting.

Portrait of billionaire Elon Musk before and after using the Voilá AI Artist app. Photo: OlharDigital. According to the Wired , when paying, it’s true that the app processes photos faster. However, it is not possible to confirm if it is due to the processing acceleration feature or because the app has removed ads. Compared to free apps that often appear on the Play Store or AppStore, Voilá has a more “sustainable” way of collecting money. Usually, users only need to pay a one-time amount of a few dollars if they want to quit ads, or accept to see periodic ads for free use. With weekly payment mode, users also need to note the automatic payment. Compared to the whole year price, if you buy a weekly package just to edit a few photos and forget, users can lose tens to hundreds of dollars if they forget to remove automatic payment. This is not an uncommon problem with today’s paid recurring or content services. Users should be careful to avoid wasting money when the application automatically renews. Doesn’t require ‘sensitivity’ like FaceApp, but still has a privacy note Like all apps that have access to data, Voilá AI Artist can also compromise user privacy. According to the application terms, Voilá is allowed to transfer and store users’ images like many other editing apps. This application may use users’ images for their own advertising purposes without notice or fees. 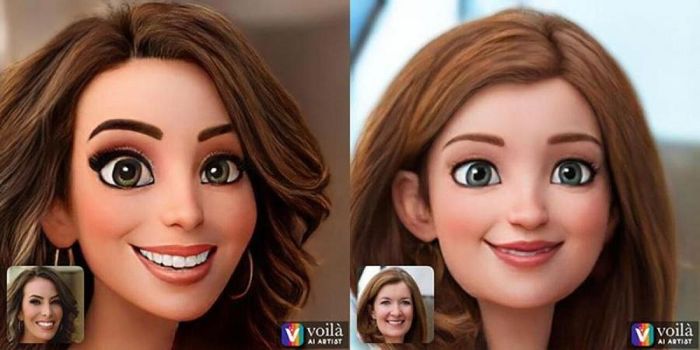 Like photo editing apps, Voilà also asks permission to use user data for advertising. In 2020, Vietnamese people used to compete to post edited photos from the FaceApp application. Like Voilá, FaceApp brings effects such as changing gender, making an old face or turning a child. However, FaceApp’s data requests are much more sensitive. Specifically, the installation part of FaceApp requires the right to launch with the system, access memory, run in the background, full permission to use the Internet… Thus, after installation, FaceApp has the right to automatically launch, access access memory and transfer data to the server. “With more than 100 million downloads, this is a huge data store. Some access rights exceed the limits of photo editing applications,” said Tri Duc, a security expert working in New York, USA. share with Zing when talking about FaceApp . Developers Website.AI of the application Voilá AI Artist said their company will delete the data after 24-48 hours. However, this claim has yet to be verified. So, Wired users need to understand that the use of these “transforming” applications carries certain risks and needs to be responsible for themselves before using.