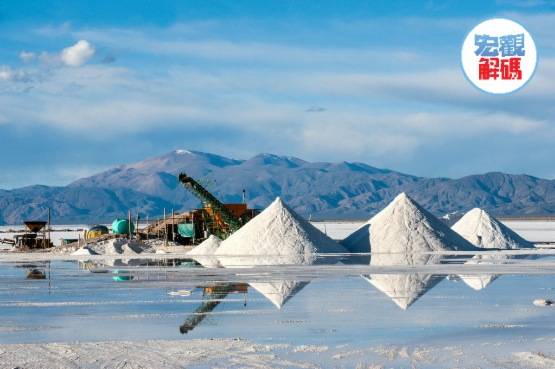 After the completion of this investment, Ganfeng Lithium will obtain the underwriting right of 50% of the first phase of the Goulamina project with an annual production capacity of about 455,000 tons of spodumene concentrate.

If the company directly provides financial assistance or assists LMSA to obtain debt funds provided by third-party banks or other financial institutions, it can obtain the underwriting right of the remaining 50% of the project’s first phase.

01 Everything is for lithium

At present, China’s proven lithium resources (metal equivalent) reserves are 5.4 million tons, of which salt lake resources account for about 70% of the country’s total reserves, and ore resources account for about 30%. Despite recent progress in the technology of extracting lithium from salt lakes, it still faces problems such as high cost, high purification difficulty, and low output.

This is not the first time that Ganfeng Lithium has “goed to sea for lithium”. Just in May 2021, Ganfeng Lithium completed the capital increase of Bacanora, an overseas company, with a transaction amount of not more than 190 million pounds. After the transaction is completed, Ganfeng’s 17.41% stake in Bacanora increased to 28.88%.

Bacanora was established in 2018 and is listed on the AIM section of the London Stock Exchange in the United Kingdom. Its main asset is the lithium clay Sonora project in Mexico. The Sonora project is a lithium extraction project from lithium clay located in Mexico. It is currently one of the largest lithium resource projects in the world. The total lithium resource of the project is approximately 8.8 million tons of lithium carbonate equivalent. It is estimated that the annualized lithium hydroxide production capacity after the first phase of the project is put into operation will be 20,000 tons.

Ganfeng Lithium’s road of seeking lithium goes far beyond that. The time goes back to November 20, 2012. Its subsidiary Ganfeng International and Canadian International Lithium Co., Ltd. signed the “Ireland Blackstair Lithium Mine Project Equity Agreement” to obtain Lithium International has no less than 51% equity in the Blackstair lithium mine project in Ireland.

The Irish Blackstair lithium mine project is located in the Irish Leinster lithium pegmatite ore belt 80 kilometers south of Dublin. This pegmatite belt extends more than 50 kilometers and currently has eight exploration licenses within 292 square kilometers. The project did small-scale exploration in the 1970s and found 19 lithium deposits, which are still under exploration.

The RIM owns 100% of the Mt Marion spodumene project. The data shows that the MtMarion lithium mine project contains 6.75 million tons of lithium oxide. The project was officially put into production in February 2017. Ganfeng International and MtMarion signed a long-term underwriting agreement. From 2016 to 2019, Ganfeng Lithium will refer to the market. Price, all spodumene concentrates produced by underwriting lithium ore projects with a lithium oxide content of more than 6%.

In January 2017, Ganfeng International subscribed for 75 million new shares of Lithium Americas Corp. (“America Lithium”) with its own funds at a price of 0.85 Canadian dollars per share. The transaction amount was 49 million US dollars. This transaction After completion, Ganfeng International holds a 19.9% ​​stake in American Lithium and provides development loans not exceeding US$125 million in total.

The core assets of Lithium America are the Cauchari Salt Lake Project in Jujuy Province, Argentina and the Clay Lithium Extraction Project in Nevada, USA.

Looking back at history, it seems that Ganfeng’s global exaggeration has never stopped. Lithium resources are tight and I dare not slow down. Every acquisition costs a huge amount of money. Where does the money come from?

02 Part of the shareholder’s shares released from the pledge

In addition to a small portion of its own funds, the expansion of Ganfeng Lithium still relies on external funds. The founders have long obtained external funds through equity pledges, and the financial leverage is smooth.

After the pledge was lifted, Li Liangbin and those acting in concert still had pledged shares outside. The accumulated pledged shares amounted to 61.56 million shares, accounting for 21.24% of his shares and 4.43% of the company’s total equity.

The release of the pledge of shares shows that Ganfeng Lithium is currently full of cash flow, and the debt problems in the past are gradually declining. It also indirectly shows that the original creditors recognized the value of the shares of Ganfeng Lithium, otherwise they would not risk taking over.

Stock pledge is a financing method often used by listed companies, especially in the case of poor capital links and poor business operations, some major shareholders will prefer this financing method. If the pledge is not enough, the pledged stocks will be Selling to a bank or trust means that shareholders indirectly reduce their holdings to realize cash.

However, for some listed companies that do not perform well, the pledge of stocks for financing is extremely dangerous, and it may cause fire. Generally, both parties of the stock pledge will agree that if the price of the stock drops and touches the pledge liquidation line, the pledge institution will force the sale of the pledge. The stock price further caused the stock price to collapse.

For some listed companies with stable operations, stock pledge to finance is a more efficient and low financing cost. At least one’s own stock can be pledged, which is also a symbol of strength.

In recent years, most of the money from Ganfeng Lithium’s stock pledge financing is still used in two aspects, one is the layout of production capacity, and the other is the layout of upstream lithium resources.

Because of the continuous staking and enclosure, Ganfeng Lithium can stand out from the competitors, and the reserves of lithium resources in domestic listed companies have won the crown, as shown in the following figure:

Whether Ganfeng Lithium did not enter the Ningde era’s supply chain camp, or whether the two have indirectly cooperated through cathode material manufacturers, which is unclear.

Wall Street in the crypto rush

editor - April 17, 2021 0
The Bitcoin hype has reached a new high: On Wednesday, the largest US trading platform for cryptocurrencies celebrated its stock exchange debut on...