Communicating anti-epidemic messages through public service portals, public Wi-Fi systems or promoting the power of social networks are Quang Ninh’s creative ways in propaganda against the Covid-19 epidemic.
Le Ngoc Han, Director of Quang Ninh Department of Information and Communications, shared that at times when the epidemic had many hot developments, anti-epidemic propaganda in the province was carried out in a concentrated, proactive and total effort with many forms. In particular, especially promoting the strengths of IT and telecommunications infrastructure to be proactive in epidemic prevention and control. 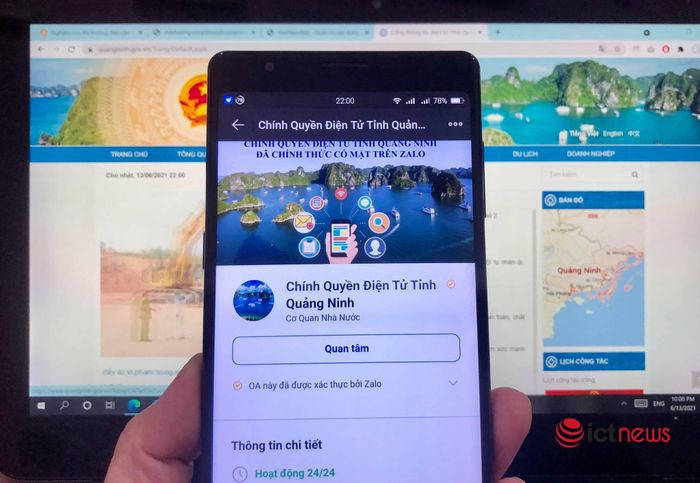 The information is continuously updated at the e-Government of Quang Ninh province on the Zalo platform (Photo: Duy Vu) Quang Ninh is one of the affected localities in the 3rd outbreak when Van Don airport and Dong Trieu town appeared new cases. At a time when the epidemic was complicated, the province’s information and propaganda work was carried out continuously in many forms and showed positive effects. Ms. Le Ngoc Han shared: “Instead of only using traditional methods in print press, radio, television, and electronic press, today, communication is used to the fullest extent. In particular, promoting the strengths of IT and telecommunications infrastructures. Specifically, Quang Ninh uses a public service portal to bring information about Covid-19 prevention to people and businesses. The public service portal is one of the methods of communication with people and businesses, which has a large amount of traffic every day, so information is quickly and widely distributed. Especially when social distancing, the more users need to access the public service portal. Quang Ninh also uses the basic infrastructure of the provincial e-government (invested since 2014) to access the entire system of civil servants and public employees from the province to the commune level. In addition, all administrative documents of the province are sent via the official email system to civil servants and public employees. Currently, the province is testing a smart application in the IoT system, which is identified as an effective communication channel. In addition, the Department of Information and Communications also uses the public Wi-Fi system to deliver messages and content that need to be transmitted immediately to the people about epidemic prevention and control. “Another system that we consider very effective is basic information,” said the director of the Quang Ninh Department of Information and Communications. Not only providing the written content as directed, at peak periods such as the 3rd outbreak, every day the Department of Information and Communications prepares a newsletter to give to the basic information system to communicate key and fastest content to the people. “So we communicate proactively, purposefully and communicate focused content throughout the province,” said Ms. Le Ngoc Han. Using and promoting the effectiveness of social networks is a form deployed by the province to bring information to the people quickly. In Quang Ninh, most departments and branches have a Fanpage; All information on epidemic prevention and control is focused on these channels or Zalo platform on the provincial e-Government page for daily news updates.

Uxin raised 300 million US dollars to sell core assets for...