Home News Vietnam Thai newspaper: ‘The glorious past has become a thing of the past’

‘Thailand started to fall back and obviously fell into the abyss. At the SEA Games, Thailand used to be a big man, but in a flash the glorious past has become a thing of the past,’ the Thai press said bitterly. 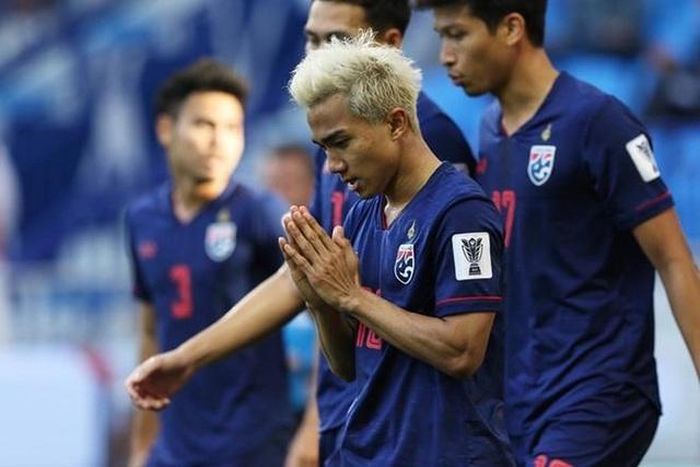 The Thai team shows signs of decline in Southeast Asia In the past 4 years, Thai football not only has not progressed to the Asian level as expected by football players in this country, on the contrary, they have clearly declined. Thailand is now 30 places behind Vietnam in the world rankings, despite spending a lot of money to invite reputable and famous coaches. Thairath wrote: “Who is not ashamed but I do. Since taking the chair of the President of the Thai Football Federation, Mr. Somyot has made everyone seem to have hope that Thai football will grow in stature and professionalism. In the end, all talk is just a dream. Thailand’s achievements are like falling into the abyss where they used to be the eldest brother. They were eliminated in the second qualifying round of the 2022 World Cup in Asia, with a score worse than their regional rivals, Malaysia. Like this, are you embarrassed?”. Page Thairath continued to criticize: “Look at Vietnam. They have risen to the number one position in Southeast Asia and 30 places above Thailand. Thailand has been terrible since President Somyot came to power. Is Japanese coach Akira Nishino worth such a large amount of money (30 million baht/year, equivalent to more than 20 billion VND/year)? At the very least, it must be exchanged with achievements. Because if you take that money to hire a Thai coach, the achievement is just that.” Siam Sports page also borrowed the words of former player Somchai Chuayboonchum to put pressure on coach Nishino: “The salary Nishino is receiving is too high compared to the results Thailand received. It’s a shame Thailand didn’t make it to the next round. The team seems to lag behind other competitors in Southeast Asia like Vietnam and Malaysia.” In the article, the author expressed concern about Thailand’s decline in the region as well as the quality of the Thai League: “Thailand team started to retreat and obviously fell into the abyss. At SEA Games, Thailand used to be a big man, but in the blink of an eye, the glorious past was gone. Everything was lower than expected. There is no title, no joy of winning and the Thai League is also starting to show signs of faltering. After that, Thai League is no longer the most appreciated tournament of the region. The Thai audience once again felt pain when the Thai team failed miserably in the 2022 World Cup. Vietnamese football is in the No. 1 position in Southeast Asia. If we stay in this situation, will we be able to ‘survive’ at SEA Games 31?”. Contrary to previous speculations of experts and fans, the Thai Football Federation did not fire coach Nishino. Not only that, they also decided to recruit some Japanese assistants to support Mr. Nishino in the near future. “I understand coach Nishino and the players very well. There are many objective reasons affecting the team’s results. From the detection of some cases of Covid-19, the team’s preparation plan has been greatly affected. Even the whole team could not practice anything in Thailand before going to the UAE. As for why coach Nishino doesn’t have any Japanese assistants, from the outset, the federation asked him if he wanted to bring any fellow assistants to Thailand, but he insisted he wanted to go to Thailand. alone. We never stopped Coach Nishino from using a Japanese assistant. However, we are willing to hire more Japanese assistants for Coach Nishino and this will not affect the salary that the federation pays him,” – announced President Somyot Poompanmoung. In addition, when asked by a reporter whether during the economic crisis caused by the Covid-19 epidemic, whether coach Nishino would have his salary cut, chairman Somyot Poompanmoung affirmed: “Based on the new contract, coach Nishino’s salary is 33 million baht/year, equivalent to about 2.75 million baht/month (approximately 2 billion VND). This new level is applied after we have implemented implement a policy of reducing wages for all employees of the union”.

Looking back at the match between UAE and Vietnam