Massachusetts Institute of Technology (MIT) is working on an efficient manufacturing method for a graphene-based chainmail bulletproof armor, which could potentially give the military better protection than today’s bulky vests. .
first. Bulletproof clothing made of carbon fiber

The researchers tested graphene’s ballistic missile defense by firing small projectiles at it. They found that the material was stiffer, more flexible and lighter than the Kevlar jackets used in the military today. And, a million layers of material would be only 1mm thick. The Massachusetts Institute of Technology’s (MIT) Soldier Nanotechnology Institute is working on an efficient manufacturing method for a graphene-based chainmail bulletproof armor, which could potentially give the military better protection than with today’s bulky coats. Chainmail (or mail or Maille) is armor made of metal rings joined together in a protective mesh pattern. Can be used for marines, especially those who have to work in harsh environments, bulletproof and protect against the risk of attack by wild animals when doing special missions. 2. Synthetic blood Synthetic blood is much more efficient than natural cells. The most promising technology being studied is a respirator – a theoretical red blood cell made of diamond that can hold gas at nearly 15,000 psi and exchange carbon dioxide and oxygen in the same way real blood cells. Supersoldiers whose breathing cells are mixed with their natural blood will essentially have trillions of miniature gas cylinders inside their bodies, which means they’ll never run out of breath and can stay under. water for hours without any other support equipment. 3. Jump 7 feet (2.13 meters) and run 25 mph (40.23km/h) Scientists at MIT and other research universities are looking to strengthen the human ankle and Achilles tendon with bio-boots that mimic the tendons of kangaroos. Humans equipped with such boots would be able to jump 7 feet (2.13 meters) or more, sprinting at incredible speeds. And run all day without muscle wear and tear. 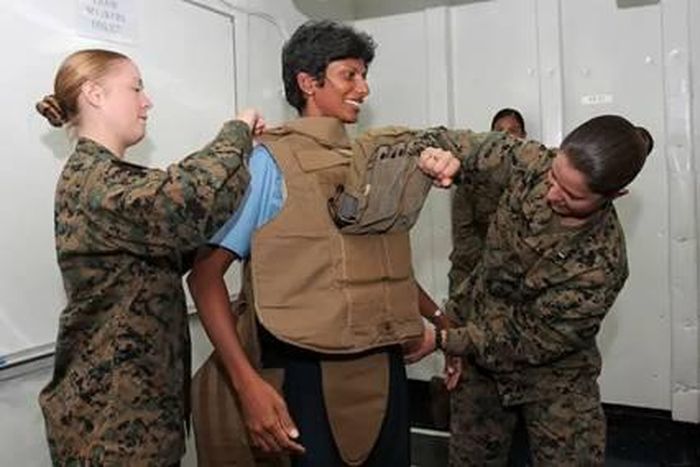 Bulletproof armor. 4. Vaccinations for pain relief DARPA’s Combat Persistence Initiative (short for Defense Advanced Projects Agency of the Pentagon, USA) aims to help soldiers recover almost immediately from injuries. The pain-relieving shot will work for 30 days and eliminate the painful inflammation that persists after the injury. So soldiers could feel the initial agony of being hit by a bullet, but the pain would disappear within seconds. Soldiers can self-medicate and continue fighting until medical evacuation. 5. Fight against sleep Not all animals sleep the same way. DARPA wanted to find a way to let humans sleep with only half of their brains at a time like whales and dolphins, or even skip sleep for long periods like ENU mice. 6. Telepathy Not all brain implants look very comfortable. US Patent Application Richard A. Normann. Part of DARPA’s “Brain Machine Interface” project is to develop better computer chips that can connect directly to the human brain via implants. In addition to allowing soldiers to control robots with just their thoughts, this will allow teams to communicate via telepathy. While the chips have improved, the project has some detractors. Part of the research is the ability to control mice remotely via implanted chips, and some defense scientists worry about the risk of the military having its mind hacked. For example, the movie “Men Who Stare Goats” is based on a book by Jon Ronson about a secret unit created by the US military in 1979. According to the book, the US military believes soldiers can become invisible, go through walls and kill goats by staring at them. Actor Ewan McGregor plays a reporter who stumbles across a member of that special unit as he prepares to go to Iraq, and the reporter and Lyn Cassady – Clooney’s character – continue the unfortunate journey : they were kidnapped, shot and hit by a roadside bomb… 7. Power-assisted underwear Meanwhile, Harvard researchers studied the “soft exoskeleton”. It’s a DARPA-funded robotic suit that’s essentially a series of fabric muscles worn under a garment to assist the wearer in every step or movement. This reduces fatigue and increases strength without requiring the enormous amount of strength that tough exoskeletons require. 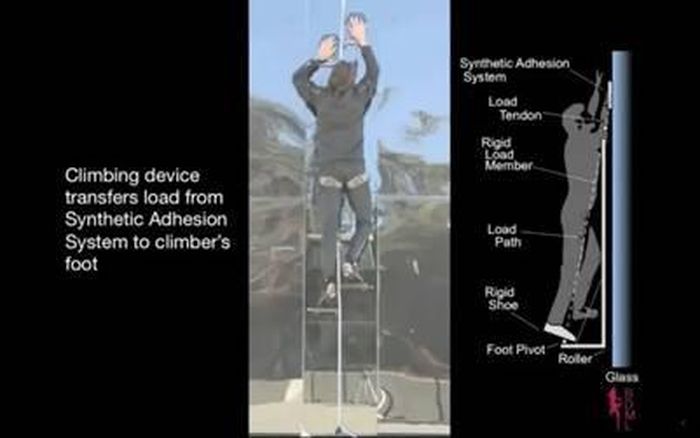 Gloves and climbing shoes like geckos. 8. Gloves and climbing shoes like geckos Geckos use the tiny hairs on their legs to cling to surfaces on a molecular level. Although the “Z-Man” project does not necessarily give humans the ability to crawl along the ceiling like a gecko, special climbing shoes and gloves will allow soldiers to easily climb the amazing rock face. against or onto skyscrapers without any other equipment, greatly reducing overhead attack. Researchers have made breakthroughs and can actually support a man weighing up to 90.71kg with current prototypes. Experts note that in the civilian field, work on nerve transplants for humans is happening very quickly. In 2017, Elon Musk unveiled a pig named Gertrude with a coin-sized computer chip in his brain, to demonstrate his ambitious plan to create an interface between the brain and the machine.

Let the space station fall, but only fined 400 USD