Home Tech What makes the upgraded Mi-28NM the most powerful Russian helicopter?

The Mi-28NM, the latest version of the Mi-28N helicopter, will be unveiled at the MAKS-2021 aerospace show to be held in the city of Zhukovsky, on the outskirts of Moscow, Russia next July.

Upgraded Russian Mi-28NM attack helicopter. Photo: TASS The demonstration of the complex technical features of the Mi-28NM attack helicopter will be one of the most awaited events of MASK-2021. “The Mi-28NM helicopter has undergone many upgrades after being tested on the Syrian battlefield. Engineers have successfully experimented in real combat conditions to present the most powerful version of the ‘iron bird’ in the Russian air force,” said Professor Vadim Kozyulin of the Russian Academy of Military Sciences. . In terms of structure, the cockpit of the Mi-28NM is reinforced more firmly, with an air-conditioning system, with additional protective armor, including a metal front windshield that is resistant to 12 bullets, 7 mm. The cabin has an additional layer of glass that separates the compartment between the two pilots, minimizing the possibility of the main pilot and the pilot pilot dying at the same time from enemy fire. The iron frame of the Mi-28NM is capable of withstanding 20mm anti-aircraft shells. With this design, for the first time, the principle of separating the cockpit between the main pilot and the pilot pilot was applied. In the event of an emergency when the plane is above 100 m above the ground, the crew can parachute to escape when the plane crashes and crashes. The emergency exit system will be activated by the main pilot and the pilot pilot separately. 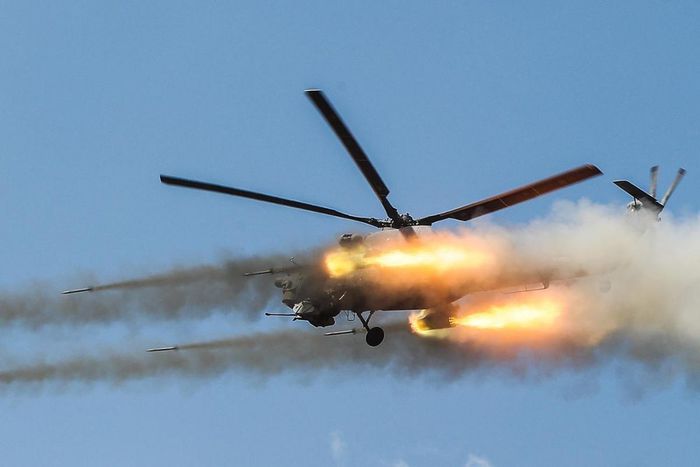 Mi-28NM is equipped with a powerful weapon system and firepower. Photo: TASS According to Dmitry Litovkin, CEO of Independent Military Review, the Mi-28NM is the latest version of the Mi-28N series of helicopters. It is enhanced with many tactical features, especially combat power. The helicopter is equipped with high-precision weapons, has a new control system integrated with artificial intelligence (AI). Mi-28NM is compatible, join the battle formation with helicopters, UAVs and other aircraft on the battlefield. In terms of firepower, the Mi-28NM heavy attack helicopter is equipped with a variety of powerful weapons systems, including new-generation multipurpose missiles and various bombs. The helicopter can attack stationary and moving targets within a radius of 8-10 km. Notably, this improved attack helicopter is also equipped with a suicide drone. Helicopters can enter a predefined combat area and launch one or more drones from the cockpit. Once the target has been identified, the crew will report the data and monitor the kill launch process. Mi-28NM is capable of operating in all weather conditions, can fly in both automatic and manned modes, and is adaptable to all types of terrain. One of the most practical improvements in the Mi-28NM is the crew’s “double control” mode. In the event that the main pilot is injured or killed, the pilot can still control the helicopter. This is a feature that does not appear on other Mi-28N series. Another improvement is that Mi-28NM is equipped with a radar system in the cockpit, capable of scanning around the aircraft, with a scanning angle of up to 90 degrees horizontally and 44 degrees vertically, helping to detect Display and locate multiple targets at the same time.

‘Vietnamese technology businesses should make their own big dreams’

Minh Sơn (Vietnam+) - April 19, 2021 0
Deputy Minister of Information and Communications Nguyen Huy Dung affirmed: If Vietnamese businesses do not build their own dreams, others will hire you to...