Recently, the Asian Turtle Conservation Organization announced the genetic sequence of the individual Dong Mo turtle, which is the Sword Lake turtle. 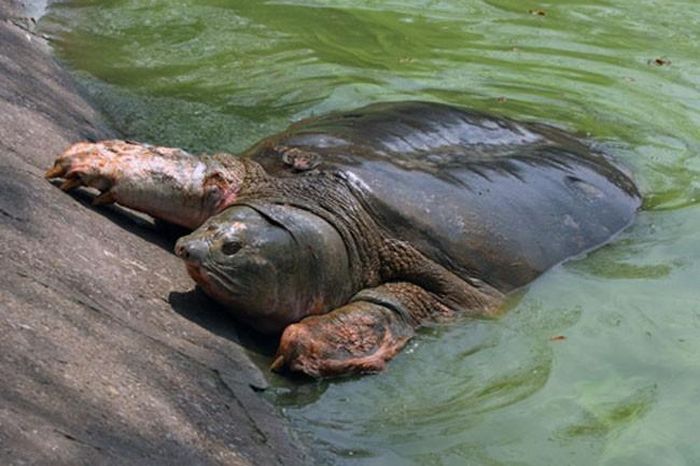 Artwork/INT As a person with more than 20 years of research on Ho Guom turtles, Assoc. Prof. Dr. Ha Dinh Duc, former senior lecturer at the University of Natural Sciences (Hanoi National University) still has many doubts. Hoan Kiem Lake turtle is the only species loài Assoc. Prof. Dr. Ha Dinh Duc said that ten years ago, the Asian Turtle Conservation Program posed the problem of searching for individual Ho Guom turtles living in other places to pair for the purpose of species conservation. Since 2006, when he discovered that Dong Mo Lake is also likely to have at least one individual of Ho Guom tortoise, he disagreed on the subspecies. Although he went to the place and studied on photos, he found that the Dong Mo lake turtle was completely different in terms of the Sword Lake turtle morphology. Sword Lake turtle is a new species of turtle, the world’s scientific name is Rafetus leloii because this turtle is associated with the legend of King Le returning his sword on Luc Thuy lake in the 15th century, the lake changed its name to Hoan Kiem lake (Ho Guom). . The word “Rafetus” is the name of the genus of turtle, which is derived from the name of the river Raft in India. “leloi” is the species name, named after Le Loi. The person associated with the legend returns the Treasure Sword to the Turtle God. As a rule, the species name is one word, not capitalized, so the two words Le Loi write together as leloi, and add the character ‘i’ to become leloi. In the International Conference “Sustainable Development – Hanoi Capital – City of Culture, Heroes, For Peace” on the occasion of the 1,000th anniversary of Thang Long – Hanoi, once again Assoc. Prof. Dr. Ha Dinh Duc again Announcement on Sword Lake Turtle a new species of tortoise for science. “It can be affirmed that the Asian Turtle Conservation Program has never studied the Sword Lake Turtle in Hoan Kiem Lake but only investigated the Rafetus species. Dong Mo turtle and Chinese tortoise are not Sword Lake turtles”, said Assoc. Prof. Dr. Ha Dinh Duc. Sword Lake Turtle has the largest size of freshwater turtles in Southeast Asia, as well as in the world. Ho Guom tortoise has a white spot on the top of its head and is slightly skewed to the left. Eyes are rounded slightly upward, but do not rise above the surface of the head. The nostrils open to the anterior limit of the anterior jaw bone. The ivory-white horns cover the anterior jaw bone. The fleshy lip encloses the outer margin of the upper jaw and the posterior half of the lower jaw. The back of the head, neck and carapace are light gray. The underside of the chin, neck and bib are pale pink. The carapace is oval in shape, the spine is slightly concave, without spots or stripes. The shell is covered with soft frilled skin that extends beyond the outer margin of the carapace. The fringe of the skin is thin, the back is elongated and slightly cambered. The upper horn covers the anterior jaw bone and the anterior half of the maxillary bone. The lower horn covers the anterior half of the dentate bone and the anterior part of the coronal bone. The limbs are very strong, the feet have wide swimming webbed and have 3 large horn claws. Assoc. Prof. Dr. Ha Dinh Duc said, in history books as well as in legends, there are no documents or stories about a large turtle that once lived in Luc Thuy Lake. It was not until the 15th century that people knew about this turtle through the legend of Hoan Kiem of King Le. So far, there are no documents or information about this large turtle in any water body of Hanoi. Based on the results of comparative research on morphology with large soft-shelled turtles in the world, as well as in Southeast Asia, and discussed with international turtle researchers, such as: Prof. Kraig Adler – University Cornell (USA) and two other experts, Dr. William P. McCord and Dr. Patrick J. Baker, Assoc. Prof. Dr. Ha Dinh Duc found that Hoan Kiem Lake turtle species is completely different. 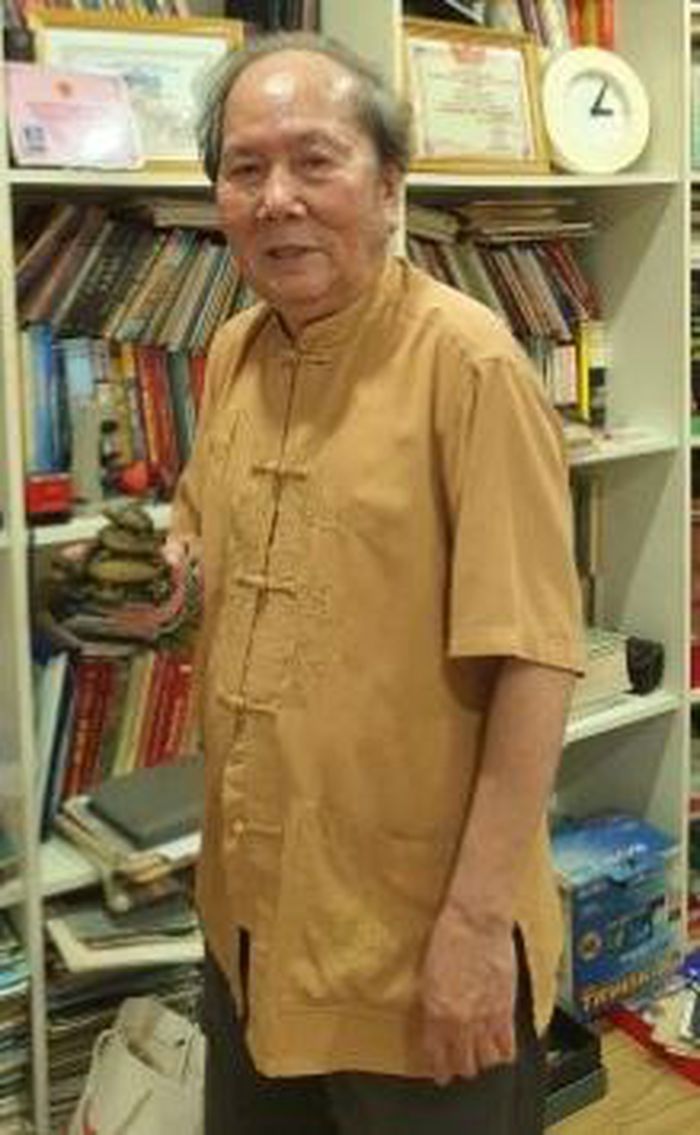 Assoc. Prof. Dr. Ha Dinh Duc. Sword Lake has only one “turtle” “Someone said there are 2-3 “turtles” in Hoan Kiem Lake. But from the time I started researching until the “old man” passed away, I confirmed that Sword Lake had only one “old turtle”. Even when the “grandfather” was weak, everyone trembled when deciding to bring him up. Seeing 2 bubbles of water, many people said that there were 2 “old turtles”, after picking up the “tools”, they thought that there was another “tool”, possibly bigger. However, there is nowhere to catch. Personally, I find that “old turtle” has actions that are really difficult to explain”, Assoc. Prof. Dr. Ha Dinh Duc shared. In many interviews with the press decades ago, Assoc. Prof. Dr. Ha Dinh Duc always expressed the need to find additional sources, because he affirmed that Hoan Kiem Lake has only one “turtle”. . In 2016, the “old turtle” died, he was also a consultant to make a template to look like “the old man” as when he was alive. At present, despite his advanced age, whenever he hears that there are descendants of the “grandfather” he is on the road again. Assoc. Prof. Dr. Ha Dinh Duc’s whole life has been with the University of Hanoi (now the University of Natural Sciences, Vietnam National University, Hanoi). At the age of “rare and old”, Assoc. Prof. Dr. Ha Dinh Duc still has many concerns with Hoan Kiem turtles. On December 18, 2020, the Hanoi Department of Agriculture and Rural Development, in collaboration with the Asian Turtle Conservation Program (ATP), announced the sex determination results of Hoan Kiem turtles in Dong Mo Lake. Hanoi). The results of genetic testing published by scientists have confirmed that the female turtle caught in October 2020 is a species of Rafetus swinhoei, a soft-shell turtle that is on the verge of extinction. This tortoise is also known as Giai Sin-hoe – Hoan Kiem Turtle. Assoc. Prof. Dr. Ha Dinh Duc also visited the place to see this trapped turtle. He said that although the genetic test results match with the Ho Guom tortoise, he is still “troubled”. Because in terms of appearance, the individual turtles in Dong Mo and Xuan Khanh lakes are not like the “old turtle” of Hoan Kiem Lake as he has known so far. To classify turtles, people rely on morphological characteristics and genetic testing. According to his observations, the Dong Mo turtle does not have the same characteristics as the Sword Lake turtle. “I observed that this turtle’s head is more pointed, the snout is more pointed, and has a very different pattern. The structure of the turtle’s eye is also not the same as that of the Ho Guom turtle I know. I have no knowledge of genetics or genetic engineering, but I am skeptical. Sword Lake Turtle is a new, endemic and rare species of turtle, but this turtle in Dong Mo looks like many common turtle species. I think it is possible that it is the same species of turtle, but belongs to a different species, a different breed… Hopefully scientists will clarify this with concrete evidence,” wondered Assoc. Prof. Dr. Ha Dinh Duc. Currently, there are two specimens of Ho Guom turtle. The first specimen died on June 20, 1967 and the second specimen died on January 19, 2016. The second specimen is plasticized according to modern German technology, which can be preserved for a long time.

Animals possessing the strangest fur in the world