In the past few days, the Chinese people have been saddened by the departure of the two giants of science, and they have also been deeply moved by their unswerving spirit of scientific exploration and their ideals and beliefs for the benefit of the people. What made them still bend in the rice field after their nineties, not giving up their scalpel? The reporter walked into the theme exhibition “All Hearts to the Party’s Self-reliance-Scientists Under the Party Leadership” opened on the 24th to find answers. 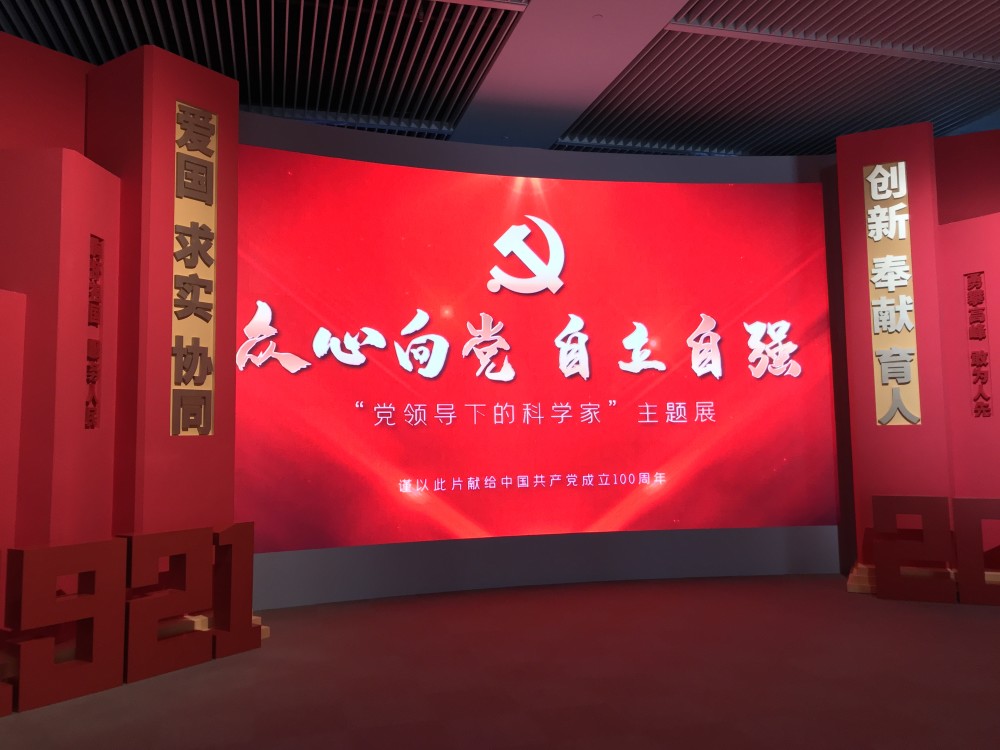 The theme exhibition of “Reliance and Self-reliance for the Party-Scientists Under the Leadership of the Party” opened at the National Museum of China on May 24th.Photo by Xinhua News Agency reporter Wen Jinghua The theme exhibition takes the strong leadership and great guidance of the Communist Party of China as the main line, takes the spiritual connotation of scientists as the framework, more than 260 texts and tables, 190 sets of scientist’s letter manuscripts and documents in kind, and 11 multimedia videos that take us through the long river of time and get closer More than 180 scientists devoted themselves to the historical moment of saving the country with science and serving the country with science and technology. At the beginning of the founding of New China, all industries were waiting to be flourished and a hundred wastes waiting to be done. The Party Central Committee issued a call to overseas students that “the motherland needs you”. “Let us go back, sprinkle our blood and sweat on the land of the motherland, and irrigate the splendid flowers… We have stood up, let’s go back, go back quickly! The motherland is eagerly waiting for us!” Exhibition wall, famous in China Nuclear physicist Zhu Guangya took the lead in drafting and publishing “An Open Letter to Chinese Students in the United States” in 1950. After 71 years, I still feel excited. 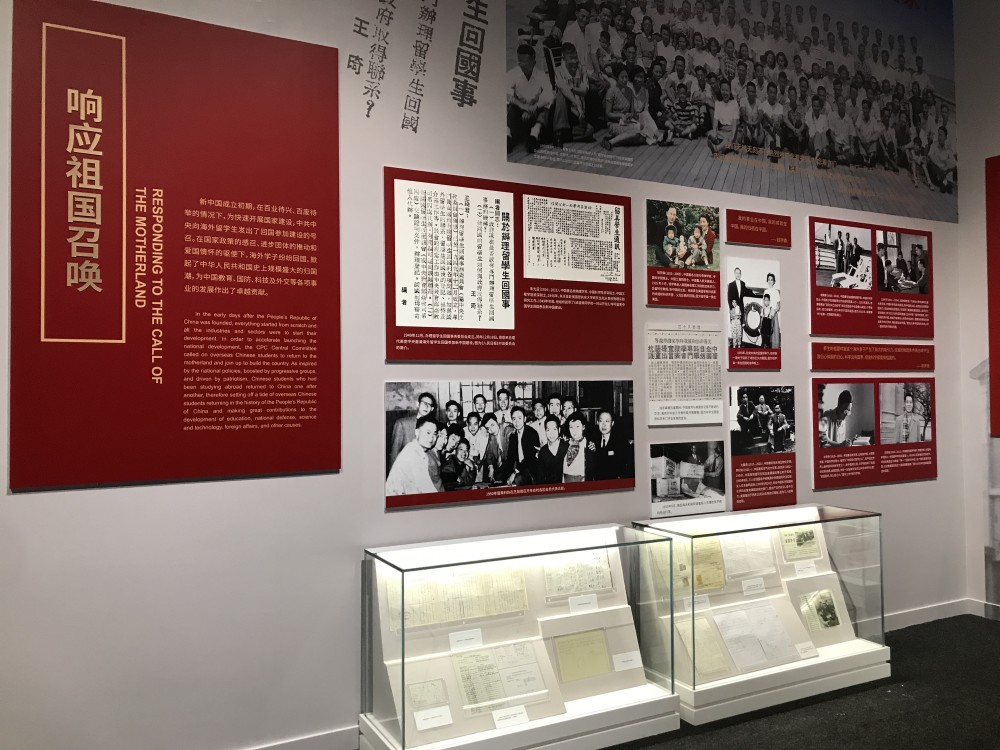 Part of the theme exhibition area.Photo by Xinhua News Agency reporter Wen Jinghua Come back home! Come back home! “Two bombs” Deng Jiaxian, Qian Xuesen, Guo Yonghuai, Cheng Kaijia, meteorologist Ye Duzheng, “earth science master” Tu Guangchi, microbial biochemist Shen Shanjiong, aerodynamicist Luo Shijun, “Chinese nuclear physics research pioneer” Zhao Zhongyao… a group of outstanding Scientists resolutely returned to China and devoted themselves to the development and construction of new China in various fields. A postcard signed by overseas students returning from the 1950s, which was exhibited for the first time this time, witnessed this grand return to China in the history of the Republic. From the successful explosion of the first atomic bomb in the vast Gobi, “Dongfanghong” played for the first time in space, to the high-speed rail and large airplanes refreshing the “Chinese speed”, going up nine days and going down the five oceans to pursue dreams at the cutting edge of science and technology…Walking in the exhibition area Inside, changing scenery is the leap of the times. From saving the country through science and technology, rejuvenating the country through science and education, to becoming a powerful country through science and technology, what has always remained unchanged is that generations of scientific and technological workers have taken the country’s major needs as their mission. A slide rule used by researchers when developing China’s first atomic bomb.Photo by Xinhua News Agency reporter Wen Jinghua When passing by the photo of Academician Yuan Longping, people slowed down and stopped to stare. In the photo, he is standing at a rice base in Hainan, bending over to view the super hybrid rice “Chaoyou Qian”. In order for the Chinese to hold their jobs firmly, the old man has been dealing with rice fields for a lifetime. “Taihang Yugong” Li Baoguo has rooted in Taihang Mountain as a day for 35 years. He goes to the mountains to “work in agriculture” for more than 200 days every year, and spends his life bringing science and technology and prosperity to farmers. After Li Baoguo passed away due to illness, his beloved, Hebei Agricultural University researcher Guo Suping continued his unfinished business. “As a researcher engaged in forestry, I will follow in the footsteps of Li Baoguo and work hard and selflessly on the road to rural revitalization, and strive to write a satisfactory answer to the party and the people.” Guo Suping said at the opening ceremony of the theme. There is also “Sugar Pill Grandpa” Gu Fangzhou, who is committed to researching polio prevention and control and guarding the healthy growth of generations of Chinese people, and Nan Rendong, a “model of the times” who has burned his life to cast the “eye of the sky”, travels to Tibet to collect 40 million seeds. Zhong Yang, a scientist in China…They are devoted to scientific research, and write papers on the land of the motherland, and also in the hearts of thousands of Chinese people.

Lunar soil in the collection of the National Museum of China.Photo by Xinhua News Agency reporter Wen Jinghua In the theme exhibition, there is an electronic screen showing a quiet starry sky, and each star is named after a scientist. “Chen Jingrun Star”, “Wang Xuanxing”, “Yuan Longping Star” “Wu Meng Chaoxing”…Because of them, the starry sky of science and technology in the motherland is exactly when the stars shine. “Scientific achievements are inseparable from spiritual support.” said Huai Jinpeng, executive vice chairman of the China Association for Science and Technology. The spirit of “two bombs and one satellite”, the spirit of moving west, the spirit of manned spaceflight, the spirit of lunar exploration, and the spirit of fighting the epidemic…Different periods, Scientific and technological workers in different fields have their own personality traits, but they have a common spiritual core, that is, the scientist spirit of patriotism, innovation, truth-seeking, dedication, collaboration, and educating people. These great spirits converge into a torrent of spirits in the scientific and technological circles toward the party, which will surely inspire hundreds of millions of scientific and technological workers to forge ahead on a new journey and continue their brilliance. To the end of the exhibition area, I saw a red wall hanging on a red wall with applications for admission to the party of 100 scientists. The papers were of different shades, new and old; from a closer look, every handwriting was neat and beautiful, and the words were simple and authentic— Scientist’s application for party membership.Photo by Xinhua News Agency reporter Wen Jinghua “I have been educated by the party in the past three years since I returned to China, which made me realize the greatness of the party and the greatness of the party to realize the goal of a communist society. I am willing to strive for this goal and be loyal to the cause of the party.” People scientist Qian Xuesen said Write. “After liberation, under the leadership of the Communist Party of China, the sludge and muddy waters of the old China were cleared, industry and agriculture developed, and many things that were imported in the past are now able to be produced by themselves. All of this has greatly increased the prestige of the Communist Party in its own mind. I deeply feel that what the party says counts, it is really fighting for the interests of the people.” Academician Zheng Zhemin, the winner of the country’s highest science and technology award and an expert in explosive mechanics, wrote. After visiting the exhibition, Hai Xing Shuo, a doctoral student at Beihang University, excitedly said to the reporter: “Faith seems to be far away from us, but in fact it is in these calculation papers and reagent bottles. It is in the older generation of scientists day after day. In the study of scholarship. The power of faith allows them to dedicate their lives desperately. Our young generation is not only moved, but also has to act, and invest in the wave of science and technology to serve the country!” Reporter: Wen Jinghua Editor: Guo Xiaolan

The online notarization platform saves time for people and businesses

Thanh Hà - May 8, 2021 0
At the 'Vietnam Digital Technology Challenge Forum' held on the morning of April 23, the Ministry of Information and Communications officially introduced the Online...