Home Travel 110 years of Uncle Ho’s departure to find a way to save...

Four years in London contributed to the formation of Ho Chi Minh’s thought. It was here that he first read the works of Karl Marx and Friedrich Engels and creatively applied Marxism to the cause of national liberation and independence.
110 years ago, on June 5, 1911, President Ho Chi Minh, then a young man named Nguyen Tat Thanh, left Nha Rong Wharf, Saigon port, on board the Admiral Latouche-Tréville ship. the journey to find the way to national liberation. During 30 years of finding a way to save the country, Ho Chi Minh stayed in the UK for 4 years from 1913-1917, a time that was not long but had an important meaning in shaping his political thought. The Vietnam News Agency correspondent in the UK had an interesting trip to places in London where Uncle Ho used to live and work. 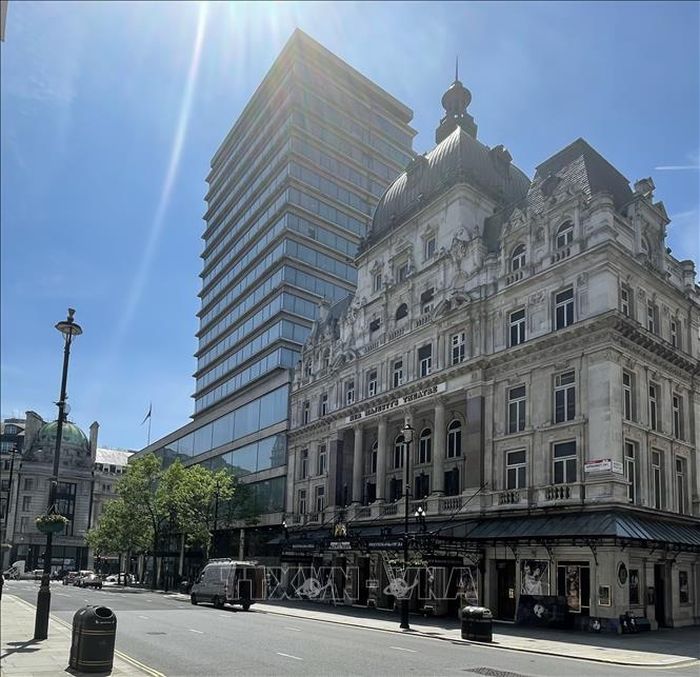 The building was built on the old Carlton hotel, where President Ho Chi Minh used to work during his years in London. Photo: VNA One morning in June in the cool early summer period, the London sky is blue, the sun is golden like honey, I visited the Drayton Court Hotel on The Avenue in Ealing district, west of London. Elegantly located in one of London’s greenest and most beautiful suburbs, Drayton Court is one of the oldest and largest pubs in Ealing, opening in 1894. With its impressive façade and antique décor Classic, elegant, this is the perfect place to enjoy a relaxing weekend with the family, or enjoy a drink with friends at one of West London’s largest beer gardens. Song Drayton Court is also attractive to visitors because this is the only hotel in London that has ever had a waiter who later became a world-class leader, that is President Ho Chi Minh. On the Drayton Court’s website, the hotel’s history introduction reads, “Ho Chi Minh, the leader of Vietnam, worked hard in the hotel’s kitchen in 1914, before he continued his journey to change his name. changed the country’s history, driving out forces from Japan, France and the United States.” 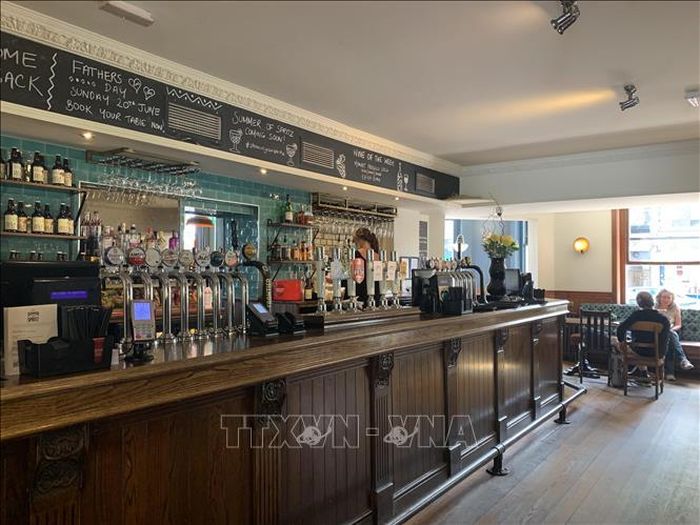 In 1914, President Ho Chi Minh served at the Drayton Court Hotel located on the quiet, deserted The Avenue street, in the Ealing district, west London. Photo: VNA/phat Stepping into the hotel with classical and elegant architecture and decoration, giving visitors a feeling of relaxation, I can’t help but be moved when I imagine the days of hard work to exhaustion of the young man. Nguyen Tat Thanh was in his twenties here more than a century ago. Talking to the hotel’s receptionist, I learned that after Drayton Court was renovated in 2011, the kitchen where Uncle used to work was completely rebuilt and became part of the cool green beer garden, Open space located behind the hotel. Walking around the beer garden where local guests happily enjoy beers with friends, I seem to see a glimpse of a slender Vietnamese young man who does not care much, hard at work in the old kitchen of the customer. hotel. Although Drayton Court is no longer imprinted with the period when President Ho Chi Minh worked here, his imprint still seems to be intact. When I was struggling to look around the outside corners of the hotel to get a good picture, a man in his 60s approached and asked: “Do you know what’s so special about this building?”. I pretended to ask: “What is it?”, “This is where President Ho Chi Minh of Vietnam used to work”. I felt a mixture of amazement, delight and pride. Amidst the busy modern life of London, a British citizen mentioned the leader of Vietnam in a historical event more than a century ago. Before I could react, he continued: “This is really an interesting and special destination for Ealing. A lot of tourists have come to visit.” The man, named Brian, said he lived in an apartment complex right next to the hotel. When he learned that I was Vietnamese, he excitedly said that he had met many Vietnamese tourists coming here, and expressed his admiration for Ho Chi Minh, who had found the way to liberate the Vietnamese people. 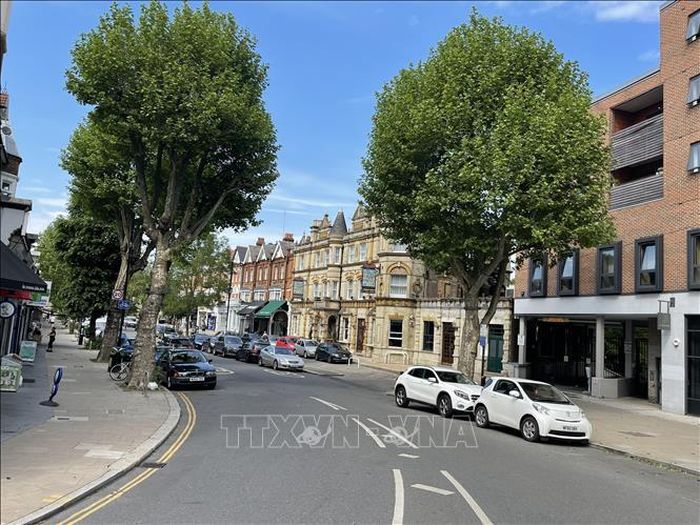 Drayton Court Hotel is located on the quiet, deserted The Avenue street, in the Ealing district, west London. Photo: VNA/phat Leaving Drayton Court with mixed joy and pride, I continued my journey to the New Zealand building located on Haymarket Street. In contrast to the quiet space of Drayton Court on the deserted The Avenue, the modern New Zealand building is located at the end of bustling Haymarket Street in the heart of London, close to Trafalgar Square and the National Museum of London. The New Zealand High Commission’s 19-story building was the first high-rise to be built in central London, on the site of the Carlton Hotel, a luxury hotel that opened between 1899 and 1940 before being completely destroyed by bombs. in war. While living in London, President Ho Chi Minh worked as a kitchen assistant at the Carlton Hotel. The front of the New Zealand building has a green peace sign with the words “In 1913, Ho Chi Minh (1890-1969) – the founder of Vietnam – worked at the Carlton Hotel, the building that used to be on this ground”. This place is probably the most famous destination in London with Vietnamese tourists. Vietnamese delegations to London often ask the New Zealand High Commissioner to visit the basement below the building, where the kitchen of the Carlton Hotel was formerly. The New Zealand building is also known by many locals and visitors for its speciality. As I was reading intently the green sign outside the building, to my surprise a man on a bicycle stopped by and happily asked if I would like him to take a picture of the underside of the sign, because you’re sure I’m Vietnamese. Not only did he agree immediately, but I asked if he could take a picture with me at this meaningful place. The 10-minute conversation between me and Mr. Steven helped me understand his special affection for Vietnam. Steven said he was originally from London, living in Covent Garden, about a kilometer from the New Zealand building. He said he really admired Ho Chi Minh’s patriotism and said that it was that patriotism that helped him find the way to independence for the nation. Steven made me feel really grateful when he said that whenever I or my friends come to the UK, give him a call. Sitting right on the sidewalk, he wrote on a small piece of paper his name, address and phone number, gave it to me and said that he always welcomes Vietnamese friends. I feel very fortunate to have met Steven, because the brief meeting helped me understand that Ho Chi Minh’s patriotism, courage, and vision made the whole world aware of the cause of Vietnamese national liberation. Male. In May 1913, Ho Chi Minh left France for England, the largest empire in the world at that time, to learn English and observe first-hand the dominating power of imperialism. In England, in order to make ends meet and spend money to learn English, he worked hard as sweeping snow, lighting furnaces, helping cooks at the Drayton Court Hotel and washing dishes at the Carlton Hotel. According to writer, historian, director of the Archives Center, Marx Library in London, John Callow, 4 years in London contributed to the formation of Ho Chi Minh’s thought. It was here that he first read the works of Karl Marx and Friedrich Engels and creatively applied Marxism to the cause of national liberation and independence. President Ho Chi Minh’s journey to find a way to save the country created a turning point of the Vietnamese revolution, changed the development direction of history and changed the fate of the entire Vietnamese nation in the 20th century. and at the same time make a mark in the history of the modern world. From a true patriot, Uncle Ho became a communist soldier, finding the right way to save the country in accordance with the historical situation of the country. For me, the trip to follow Uncle Ho in London left special emotions. I am secretly grateful to Him because His greatness has helped strangers like me, Steven and Brian become close friends.