This bacon is recorded as the oldest in the world. With a rather ‘hard to swallow’ appearance, few people imagine how it will taste.

This bacon was processed in 1902 by the Gwaltney Foods meat company before it was lost in storage. When discovered two decades later, Pembroke D. Gwaltney Jr. turn it into “pet bacon”. It was added with a copper necklace and taken to numerous exhibitions to demonstrate to customers that the company’s meat could be preserved without refrigeration. “Pet Salted Meat” In 1931, PD Gwaltney Jr. walked into a hotel in Washington DC (USA) with a suitcase in hand, wondering if it was possible to store the luggage in the hotel’s secure storage. The receptionist looked at the suitcase and asked what was so important in it. Answer by Gwaltney Jr. very simple: “Ah, just my pet bacon”. He’s not joking, and he’s also serious about wanting to keep the meat safe. An insurance company valued it at $5,000 at the time – the equivalent of $77,000 today. “Every time he goes to a food show, Gwaltney Jr. brings a special chain, which he pins the chain to the floor so that no one can steal the meat,” said Tracey L. Neikirk, curator of the Isle County Museum of Wight, Smithfield, Virginia – said. 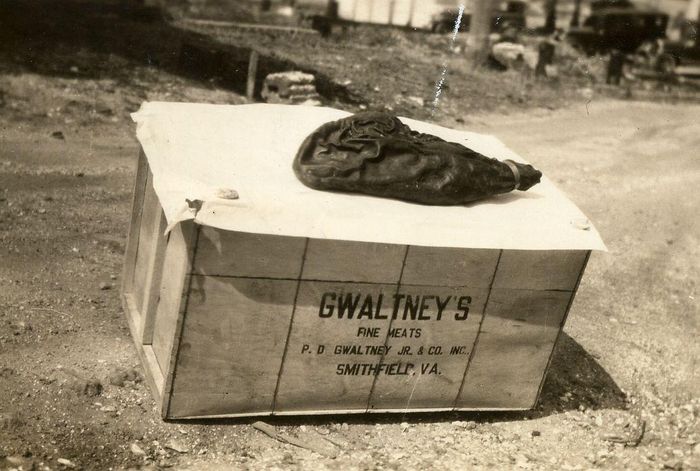 The piece of meat has its own brass ring and is owned by Gwaltney Jr. called “pets”. Photo: Southerning. Gwaltney Jr. is the owner of one of Virginia’s most successful bacon processing companies. He promoted his business by bringing his 30-year-old “pet bacon”, then 30 years old, to trade fairs, food shows, even naval ships. It’s all part of a clever marketing plan that positions Gwaltney’s hometown as the “Bacon Capital of the World”. 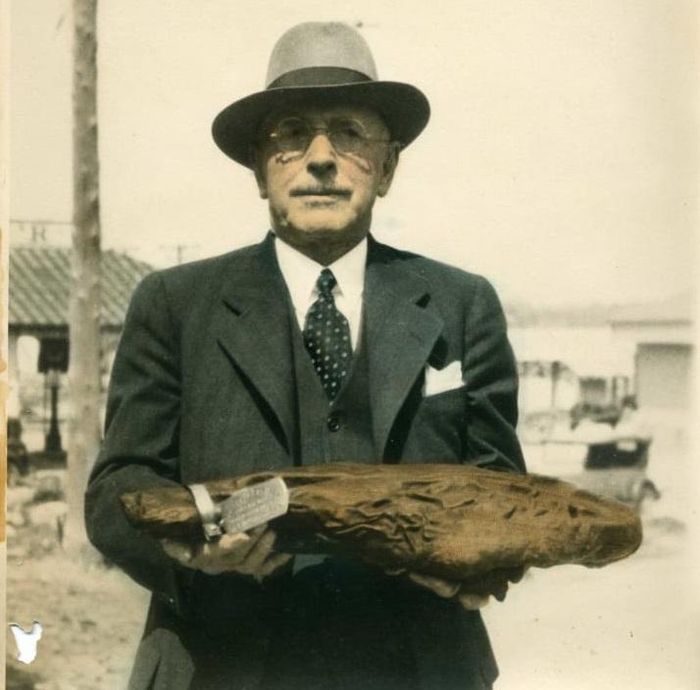 The piece of meat was carried everywhere. Photo: Southerning. Salted meat has been associated with the name of the Virginia region since the early days of the state’s founding. According to The Country Ham by Jeanne Voltz and Elaine J. Harvell, when the English colonists arrived in Jamestown in 1607, they brought a boat full of pigs. The next boat is full of piglets. They proliferated throughout nearby Williamsburg, so much so that locals moved the pigs to an island on the west bank of the James River, now known as Hog Island. The number of pigs growing around Smithfield and the Isle of Wight is increasing. When peanuts became popular in the area after the Civil War, pigs were free to roam the fields, eating peanuts left over from the harvest. These “peanut-fed” pigs help make Smithfield and the region’s bacon in the culinary world. Peanut-raised pork and a complicated and time-consuming salting process have created a unique flavor of salted meat, surprising the world’s gourmets. By the mid-19th century, Queen Victoria ordered six pieces of Smithfield bacon a week for the palace kitchen. Their prices skyrocketed. 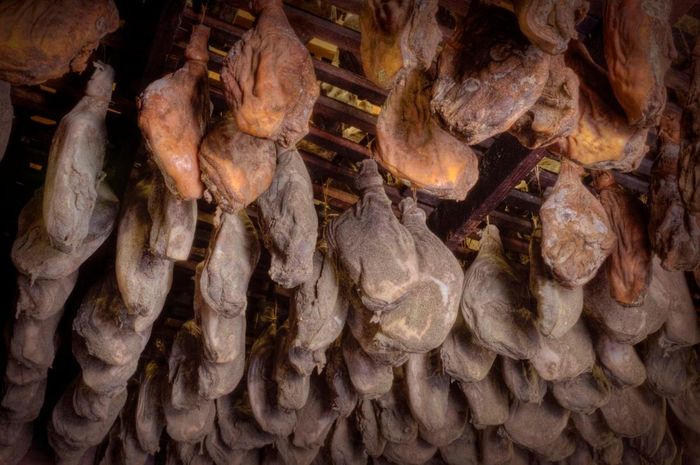 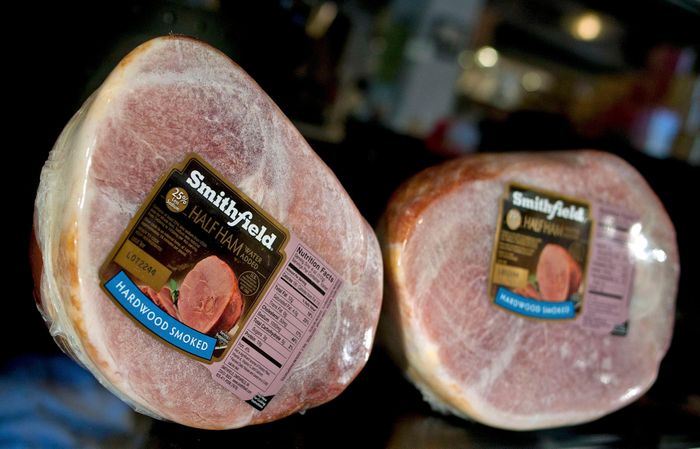 Smithfield bacon is world famous. Photo: Denverpost. As other places began to fake lower quality meat and sell it under the name Smithfield bacon, Virginia put strict rules on the meat bearing this name: Pigs had to be fed peanuts, meat had to be salted in Smithfield boundary. In other words, Smithfield has become the Champagne region of bacon. More than 100 years of history In 1891, PD Gwaltney Jr. joined his father’s peanut business – Gwaltney Sr. – at Smithfield and helped scale the company. Gwaltney Foods became a “big man” in the salt meat processing industry. At this point, Gwaltney the son learned a few marketing tricks from his father. A year ago, his father picked up a groundnut from a local field, wrote the year of harvest on it, beginning to show those curious about the quality of his produce how well the peanuts were preserved. 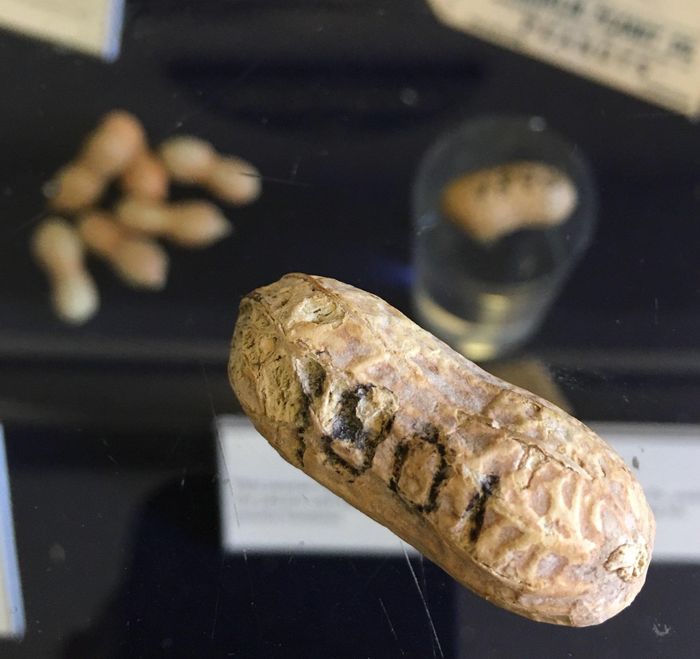 The world’s oldest peanut also comes from the Gwaltney family. Photo: Isle of Wight Museum. After many years, Mr. Gwaltney Sr. Realizing the age of the peanut itself is an attractive feature. Today, it is the oldest groundnut in the world. In 1902, Gwaltney Jr. does the same thing when a ham is accidentally left in storage. When he discovered the meat, he immediately saw a great business opportunity and decided to keep it to see how long it could last. Years passed, and in August 1921, a storehouse of peanuts owned by the Gwaltney family caught fire, setting tons of peanuts and a nearby bacon store on fire. According to the Isle of Wight County Museum, “the smell of peanuts and burning fat lingered in the air for weeks.” Luckily, Gwaltney Jr.’s pet meatballs. was stored elsewhere and escaped safely. The fire severely damaged the Smithfield peanut business, making bacon the town’s main export. Gwaltney Jr. began to focus on promoting their salted meat products, which meant bringing the old meat everywhere. He bought it $1,000 insurance, then increased it to $5,000. In 1932, the piece of meat appeared on the show “Believe it Or Not” (roughly translated: Believe it or not), which stated that the meat was “still soft, sweet and edible after 30 years”. To date, the 118-year-old piece of meat is officially recognized as the world’s oldest bacon – burnt red, with dotted white and yellow streaks and wrinkled skin. 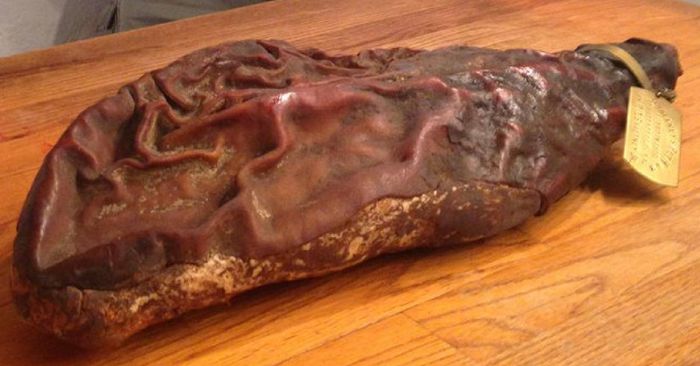 The lump of meat is still edible, but the taste has changed a lot. Photo: Mentalfloss. Neikirk, curator of the Isle of Wight county museum, said the lump of meat smelled of smoke and wood. The dry salting process used to create the mass of meat involves salting and drying the blood, helping the meat to last longer and have a richer flavor. Although still edible, this hundred-year-old meat is not as delicious as before. “It’s like dried meat now,” Neikirk said. The appearance of the meat is also difficult to make visitors feel delicious. It looks like leather, and many people even liken it to a human arm soaked in chemicals for a long time. The meat is on display at the Isle of Wight county museum in a temperature-controlled glass case. This is also the place where the world’s oldest peanut tuber is located and the world’s largest block of salted meat weighs more than 29 kg.

2 famous pieces of meat hold the world record. Photo: Mentalfloss. Today, the museum continues to make the interesting journey of the bacon. Every year, a competition called “Pan-Ham” is held. Visitors will bring a photo of Gwaltney and the “pet meat” with them to locations around the world. The winner will receive a basket of peanuts. This particular piece of meat also has a Twitter account with its own account manager. A 24/7 webcam goes live on this account, allowing “fans” to watch the meat wherever it is.

Ngọc Hòa - May 16, 2021 0
Ocean antiquities are considered as hard-to-find treasures like 'searching for a needle in the seabed, like picking stars in the sky'. The world of...