Autonomously identify elevators going up and down, deliver materials to the door of designated households, call households to pick up goods after arrival, and return to the lobby on the first floor to charge independently… This is the daily work scene of the epidemic prevention and distribution robot in the Zijunfu Community, Baihedong Street, Liwan District, Guangzhou .

The workload of material distribution in quarantined communities is huge. Recently, videos of 13 anti-epidemic distribution robots on duty have spread all over the Internet. “The intelligentization of the epidemic area is online, this is very Chinese!” The owners praised.

On the one hand, actively play the leading role of community party members, mobilize the red forces to participate in epidemic prevention work, and play the role of grassroots party organizations as a battle fortress; on the other hand, in this smoke-free war, care is done in detail, showing warmth everywhere. 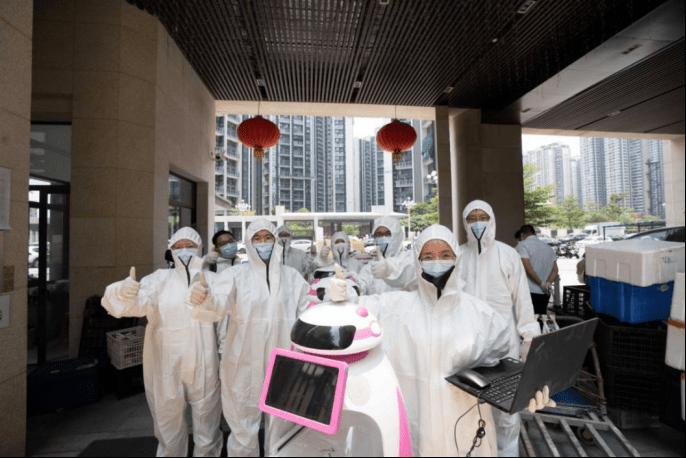 13 “broad beans” epidemic prevention and distribution robots are on duty

On the eve of the Dragon Boat Festival, the owner group and circle of friends of residents in the isolated community in Liwan District, Guangzhou suddenly became lively, and 13 delivery robots “broad beans” were officially put on duty in the Zijunfu community.

The owner, Mr. Wang, received an unfamiliar call that day, and a sweet voice reminded him to open the door to pick up supplies. “I opened the door and looked at it. I was surprised. What I saw was not a fully armed property manager, but a cute robot.” Then, he saw the robot swiping message in the owner group. 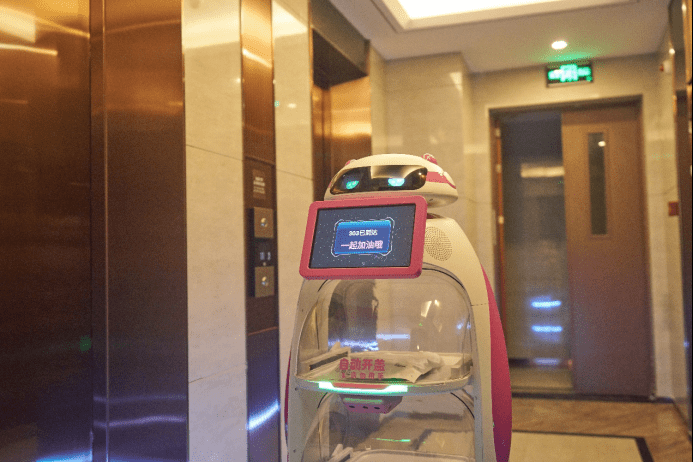 This distribution robot named “Fava Bean” has multiple functions such as intelligent map navigation and obstacle avoidance, elevator ride, errand delivery, etc. It can efficiently serve the three distribution needs at one time, so that residents in closed management can achieve it at their doorstep. No-contact food fetching throughout the entire process.

It is understood that there are 9 buildings, 13 units, and about 1,000 owners in Zijunfu Community. Each building is delivered at least 7-8 times a day. Because each material arrives at a different time and quantity, sometimes a household’s materials have to be separated. Multiple delivery.

“Since the quarantine in late May, every property housekeeper has worked overtime without rest. The work pressure is very heavy. The arrival of the delivery robot has not only greatly reduced our workload, but also increased our security.” Community Property Management Staff introduction.

“After completing the deployment of the Zijunfu community, we will also provide services in other isolated communities in accordance with the requirements of the government’s epidemic prevention department.” said Xiao Ran, secretary of the party branch and deputy general manager of the Qianxi Group under Country Garden.

Entering the community for the first time for distribution, effectively overcoming technical difficulties

In February, when the epidemic prevention and control was the most intense last year, the demand for food and beverage supply in parts of Hubei was urgent. Qianxi Group and Guoqiang Public Welfare Foundation donated two batches of self-developed container claypot rice robots to Hubei as soon as possible. Through fully automatic and contactless 24-hour hot meal supply, they provided a large number of medical staff such as Guangdong Medical Team to Hubei. Provide catering services to help Hubei win the battle against the epidemic.

With the strong support of the government’s epidemic prevention department and the isolation community, Qianxi Group basically completed the overall deployment of robot distribution in just 72 hours. After two days of intense debugging and operation, the project was delivered in the early morning of June 10 and the robot was delivered. Also officially on duty.

Xiao Ran, Secretary of the Party Branch and Deputy General Manager of Qianxi Group, introduced, “Since April this year, this delivery robot has been stationed in many hotels in Panyu and Huadu, Guangzhou, responsible for 24-hour delivery tasks and providing services for overseas inbound quarantine personnel. This is the first time that it has entered the community to carry out material distribution services.”

In the early morning of June 8, the R&D team was intensively debugging

There is a big difference between the application scenarios of the community and the hotel. For example, in a hotel, the robot can automatically dial the fixed phone to remind the room after reaching the door of the room. However, the communication methods of the residents in the community are very different, which increases the technical difficulty. Qianxi Group invested 3 R&D personnel in the Within 4 hours, the problem of adapting household mobile phones was overcome.

In addition, the on-site high-density residential elevator control signal and the robot equipment signal interfered with each other, which also brought certain challenges to equipment deployment. Two R&D personnel provided solutions and test plans within 5 hours.

Property management, the party and the masses, strengthen the community’s epidemic prevention line

Starting in late May, in accordance with the epidemic prevention and control requirements of governments at all levels, relevant areas in Guangzhou and Foshan have successively carried out nucleic acid testing for all employees in an orderly manner. Country Garden attaches great importance to the prevention and control of the epidemic, actively plays the leading role of community party members, mobilizes the red forces to participate in the epidemic prevention work, and plays the role of a fighting fortress of the grassroots party organization. 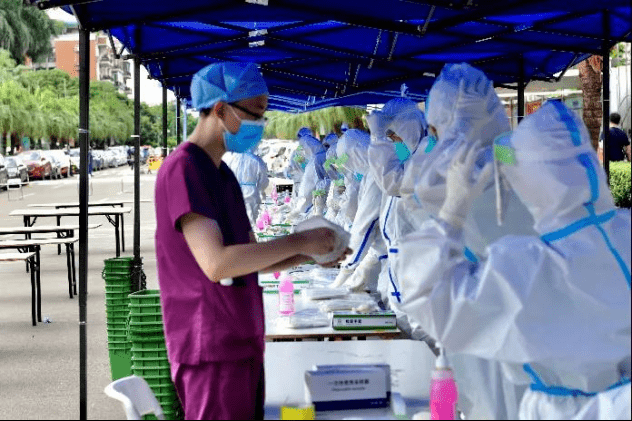 At 5 a.m. on May 29th, Guangzhou Country Garden on Nanpu Island received the notification of nucleic acid collection, and then acted quickly. At 6 a.m., personnel from various departments were called to quickly implement prevention and control measures and carry out a clear division of labor. The Phoenix Butler informs the prevention and control situation in the group, reduces the anxiety and anxiety of the owners after learning the news of the blockade, and soothes the owners’ emotions; the property personnel and volunteers are fully assembled on duty to expeditiously set up nucleic acid detection points in the community. At 10 o’clock in the morning, the construction of nucleic acid detection points in the community was completed, and the intense nucleic acid collection work was carried out in an all-round way. As of 17:00 on the 30th, the nucleic acid collection work in Guangzhou Country Garden Community was successfully completed. 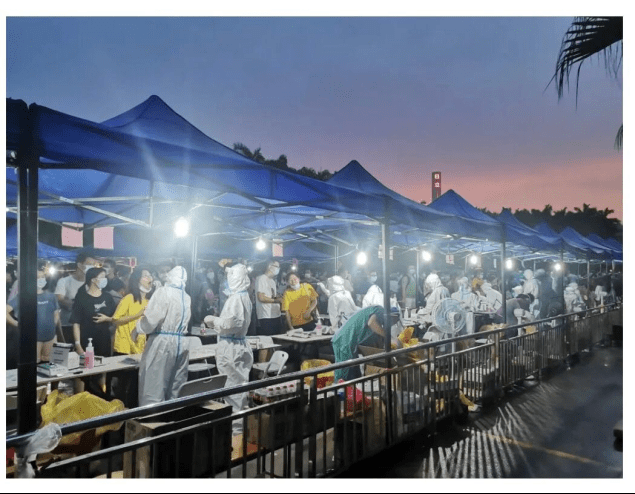 On May 29th, Nanhai District of Foshan carried out a large-scale nucleic acid test on the permanent population of Guicheng Street. The Party branch of the Yongsheng Project in the Foshan District of Country Garden learned that the Xiabei community to which the project belongs needs to carry out nucleic acid testing, and the public servants and community volunteers stationed in the village have heavy tasks and hope to receive support.

The party branch of the Yongsheng Project immediately responded to the call of the community, and combined with Country Garden Services to set up a volunteer service team to go to the community detection point to support. Due to the heavy inspection task and the large flow of people, in order to better maintain the on-site queuing order, they helped the people with disabilities, the elderly and pregnant women in the team arrange green channels, assisted in answering the doubts of the residents, and helped the elderly to register information, etc., “Red Vest We” have always been on the front line of fighting the epidemic. 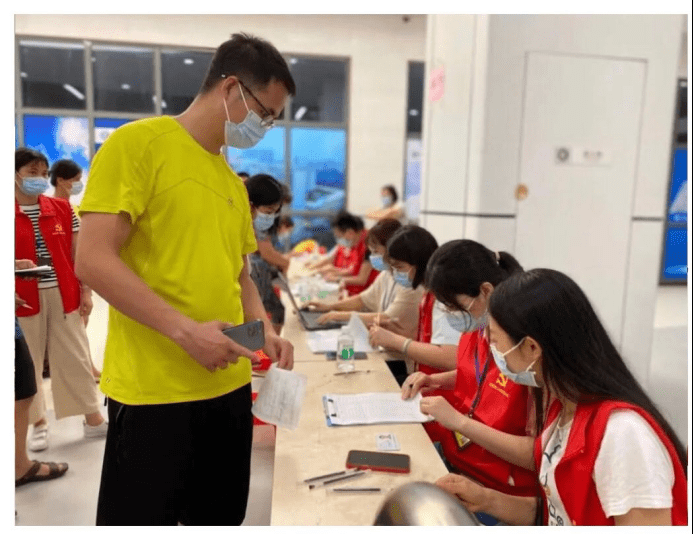 Keep watch and help, fight the epidemic with strength and temperature

While science and technology are helping to fight the epidemic, in various communities in the Guangqing/Dongguan-Shen region, Country Garden attaches great importance to the prevention and control of the epidemic. In this smoke-free war, the care is done in detail and showing warmth everywhere.

At 4 pm on June 2nd, a sudden storm swept across. At this time, Guangzhou Country Garden was carrying out the second round of nucleic acid testing, and the 63-year-old Uncle Wen was responsible for the garbage cleaning at the testing site.

Suddenly in heavy rain, Uncle Wen hurriedly draped the black garbage bag as a “raincoat” on his body. Although he was wearing a hat on his head, he still could not stop the “attack” of the violent storm, and soon his whole body was soaked. Despite this, Uncle Wen did not leave his job.

A kind proprietor saw this scene and came over and gave him an extra umbrella. However, when he turned around and saw the passing owners getting caught in the rain, Uncle Wen didn’t hesitate to give the umbrella to the other party. 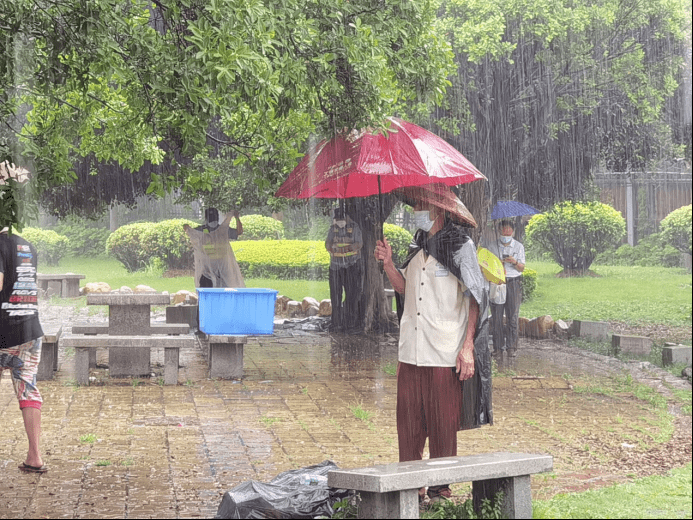 In this “epidemic” of the nationwide war of mutual assistance, touching scenes are taking place. The major communities of Country Garden race against the epidemic against the clock, try their best to block the chain of transmission, and work together to fight the epidemic.

In order to reduce the risk of crowd gathering and reduce the waiting time for owners to wait in line, Country Garden Property conducts time-based inspection arrangements for owners according to the garden area.

The Phoenix Butler, through the Moments of Friends and the group of owners, will issue notifications of inspection arrangements around the clock. Volunteers and property management security will go to each building in each garden area from time to time to remind the next batch of owners to prepare to go to the inspection point.

For owners with limited mobility, in addition to opening a green channel for young and old, Country Garden’s property management team also teamed up with medical staff to conduct nucleic acid tests door to door. 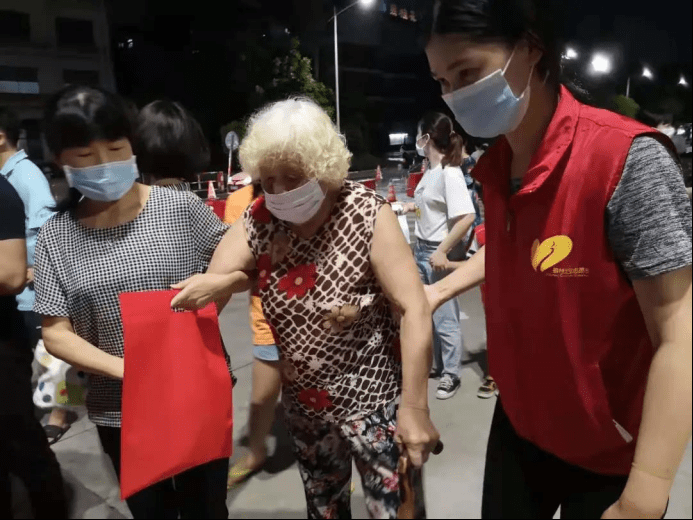 During the high temperature in summer and concentrated rainfall in the “dragon boat water”, during the inspection period, Country Garden property personnel urgently “fought” and arranged for personnel to carry sandbags to stabilize the tent.

From early morning to night, the property housekeeper fought side by side with the medical workers to overcome the difficulties together with the community workers. In this special period and at a critical juncture, they built a strong wall for the community owners to prevent the epidemic.

In order to effectively assist the epidemic prevention and control work in Guangdong Province, and at the same time convey the warm care of the Dragon Boat Festival and demonstrate corporate responsibility, on June 11, Country Garden Group and Guoqiang Public Welfare Foundation cooperated with Country Garden Jiangzhong District, Guangqing District and Bixiang Agricultural Company The community initiated anti-epidemic actions and other units, and related units in Guangzhou and Foshan donated anti-epidemic materials to provide guarantee for the stability of logistics.

As the Guangzhou-Foshan epidemic slows down, in this race against the virus, we have seen the “united efforts” of the people of Guangzhou, as well as the efficient action and social responsibility of responsible companies.