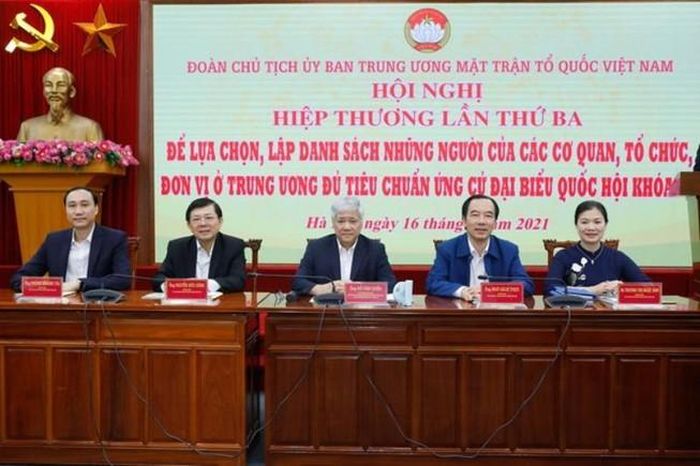 On April 16, in Hanoi, the Presidium of the Central Committee of the Vietnamese Fatherland Front held the third consultative conference to select and make a list of people from central agencies, organizations and units. qualified to run for National Assembly deputies (ĐBQH) term XV.

Reporting at the conference, Vice Chairman of the Central Committee of the Vietnamese Fatherland Front Nguyen Huu Dung, said that the number of people in the XVth term was 205 people.

Armed force is 14 NE; The Supreme People’s Court is a NE; Supreme VKSND is a NE; State Audit is a Delta; Central Committee of the Vietnamese Fatherland Front and its member organizations are 29 Delta.

Of the 18 members of the Politburo, 17 were nominated to run for the 15th National Assembly. Specifically, the Party bloc has seven people; Government bloc has four people; There are two people in the National Assembly block, namely National Assembly Chairman Vuong Dinh Hue, Vice Chairman Tran Thanh Man; One person is the Chief Justice of the Supreme People’s Court, Nguyen Hoa Binh; In the Ministry of Defense, there are General Luong Cuong, Chairman of the General Department of Politics of the Vietnam People’s Army. Besides, Hanoi Party Committee Secretary Dinh Tien Dung was introduced to stand for candidacy in Hanoi City.

According to Mr. Dung, at the Second Consultation Conference, 100% of the participating Delta agreed to make a preliminary list to send opinions to the resident voters for 205/205 people of agencies and organizations. units at the central level were introduced to nominate for the 15th National Assembly. Through conferences of voters’ residence of the candidates for the 15th National Assembly, the credit results are 100%, no matter where voters are located, it is necessary to verify.

Earlier, information at the Conference, Secretary of the Party Central Committee, Chairman of the Central Committee of the Vietnamese Fatherland Front Do Van Chien, said that after the second consultation meeting, the total number of people was briefly listed. Central and local ministries are 1093. In which 205 people at the central level, 888 people at the central level (with 75 self-nominated people), reaching the rate of 2.19 candidates / 1 Delta elected (compared with the course XIV ratio is 2.29, key XIII ratio is 2.17).

Unleash the power of the people