Home Business Bezos goes into space, the earth can no longer tolerate the involution... 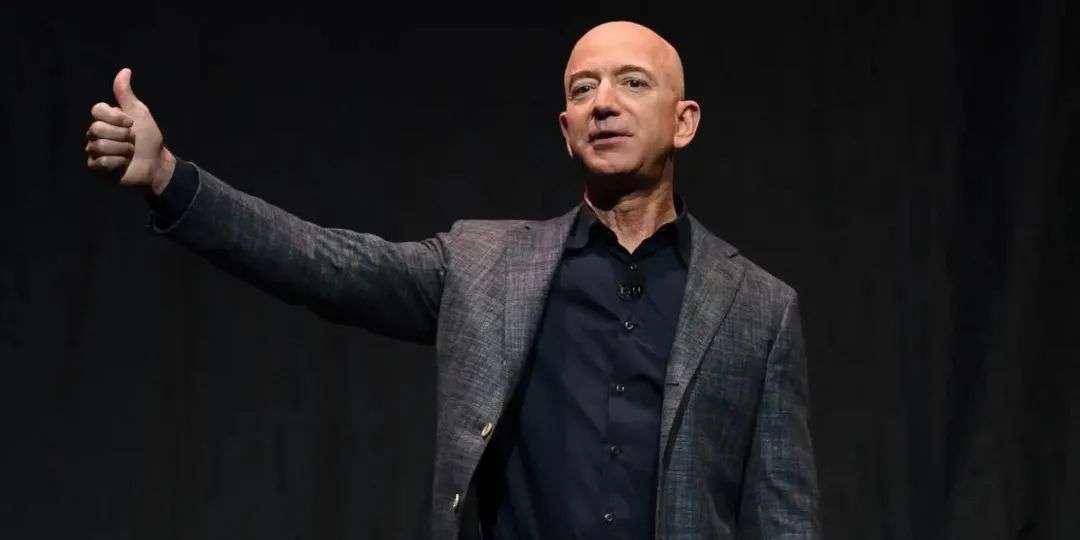 Text | BT Finance Text | BT Finance When the public were waiting to witness Musk becoming the first richest man in the world to go to space, Amazon’s “brother-in-law” suddenly made a big move. Is space the ultimate dream of the rich? The earth can no longer accommodate the involution of the rich, and space is a new journey. On May 26, Bezos announced at Amazon’s annual shareholder meeting that he would step down as Amazon’s CEO on July 5 this year. Andy Yassi, who currently leads Amazon’s cloud computing department, will become his successor. At that time, Bezos said that he would spend more time and energy on other personal matters that are more passionate, such as the Earth Fund, Blue Origin Airline, The Washington Post, and the Day One Charity Fund. Just when the outside world thought that the world’s richest man would return to a peaceful life, Bezos directly announced the decision to shock everyone-go to space. On June 9, local time, Bezos posted a video on his personal Instagram account announcing that he would take his Blue Origin spacecraft to space. Bezos wrote: “Since I was five years old, I have dreamed of traveling in space. On July 20, I will travel with my brother.” “Viewing the earth from space will change your perception of the earth and human beings. I want to fly to space. This is my lifelong dream…” In the video, along with the photos of his childhood riding on a rocket slide and the shots of looking down on the earth from space, Bezos explained his yearning for space to the public. Later, Bezos wore a cowboy hat and dressed casually and invited his brother Mark to join his travels. Mark said in disbelief: “Are you serious?” Bezos replied affirmatively: “I am, I think it will make sense.” According to reports, Blue Origin has completed 15 outer space flights so far, but they were all unmanned before, which means that the Bezos Brotherhood is the company’s first batch of space tourists. The video finally highlights the time of the first manned flight of Blue Origin-July 20, 2021. 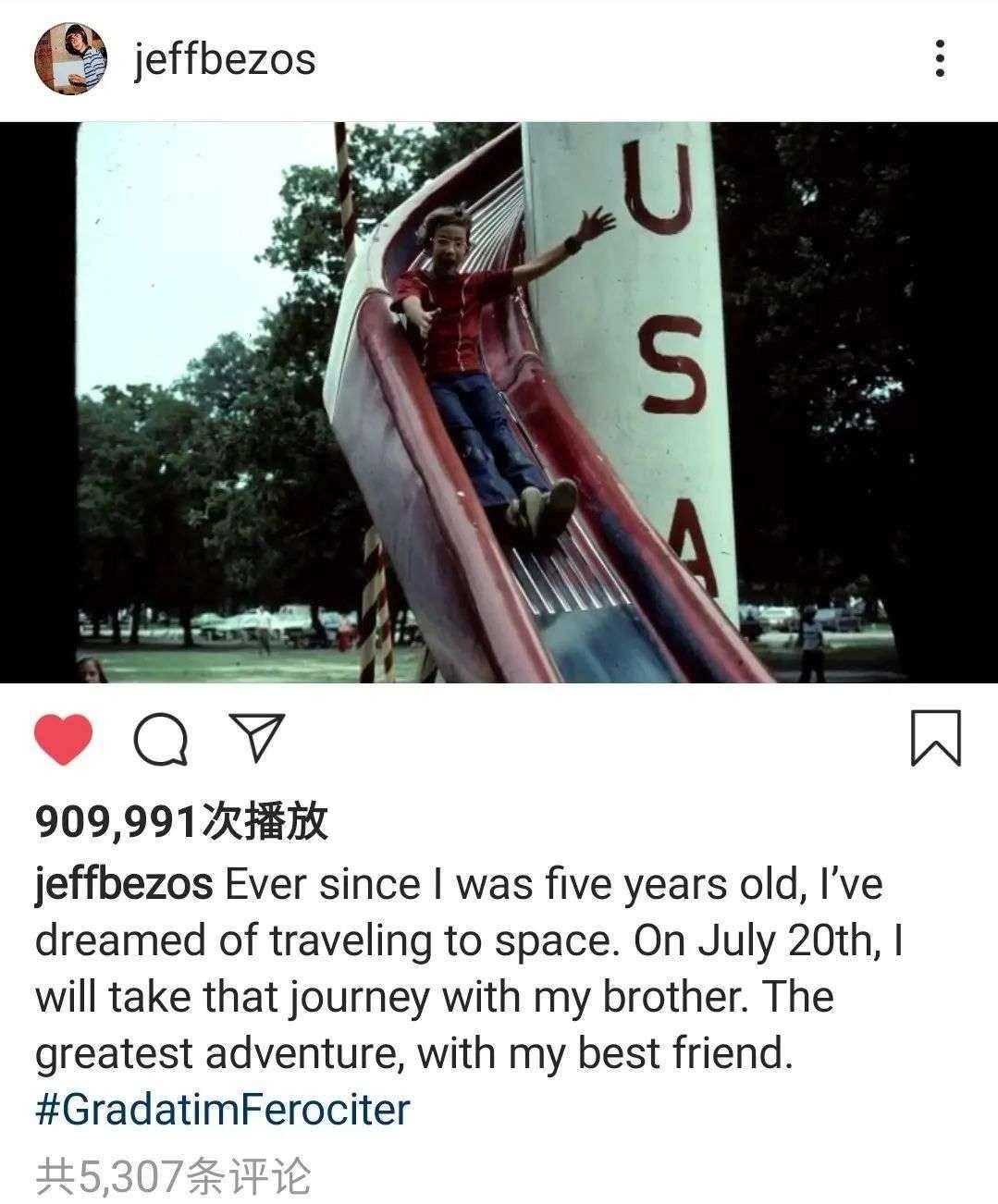 In the copy of the post, Bezoste means to mark a Latin proverb “Gradatim feroiter”, which means keep moving forward and never give up in Chinese. This Latin proverb has always won Bezos’s heart, and it is also the conspicuous slogon of his personal website page and the blue origin page.

It is reported that the first manned flight of Blue Origin will carry three passengers, and the remaining one is being auctioned off on the Internet. According to official disclosures, 6000 people from 143 countries and regions participated in the online auction of space. As of June 9th, the bidding for “spaceship tickets” has reached 3.5 million US dollars.

When the news came out, public opinion was surprised. Most people lament that Bezos is too courageous-for the dream of space, in order to win the title of the world’s richest man who has ever been in space, he really struggled. However, there are also good people who are worried about the consequences if an unexpected situation occurs, and they ridicule Bezos’s need to find a good insurance company before boarding the ship.

However, there is often a difference between the image of the propaganda and the reality. People eating melons cannot be carried away by the slogan of taking Bezos.

The Bezos brothers are not trying to fly in space orbit like astronauts. Objectively speaking, what they are trying is to experience suborbital sightseeing on a launch vehicle.

According to reports, the real travel time of the New Shepard is only about 11 minutes, and it takes about 4 minutes to cross the Carmen Line, which is 100 kilometers above the ground level, which is considered to be the boundary between outer space and the Earth’s atmosphere. When the capsule floats in a microgravity environment, the occupants will be allowed to loosen their seat belts and float around, look down at the earth through the huge windows of the capsule, and then return to their seats.

The blue bond between Bezos and space

Although there is no such high-profile promotion of “Martian speech” as Musk, Bezos has always shown a strong interest in space.

And the most widely talked about story of Bezosco’s fan status is that Amazon “takes over” the American drama “The Vast Sky”.

“The Expanse of the Sky”, which premiered in 2015, is adapted from a science fiction novel by James SA Corey. The story is set in the future 200 years later: human beings have established settlements on the moon and Mars, and then focused on the small space between Mars and Jupiter The rich mineral deposits on the planetary belt began to establish colonies on it.

A large number of space special effects shots and technological scenery make the cost of the show very high. Although it has a good reputation, the audience’s ratings are mediocre. In May 2018, the 3 seasons of “The Vast Sky” was cancelled and renewed by the cable TV station Syfy.

When fans of the show were so disappointed to protest to Syfy, Bezos, who was a loyal fan of the show, made a move.

In June 2018, Bezos announced at the International Space Development Conference that Amazon’s streaming media department and Syfy had reached an agreement to take over the production of “The Vast Sky” and will increase investment. This move attracted cheers from fans of science fiction dramas.

Since then, “The Vast Sky” has been renewed for 3 seasons, maintaining the previous high level, and the final season of the show will also be broadcast at the end of this year.

If saving “The Vast Sky” is to allow Bezos to satisfy his yearning for space in the image, Blue Origin is the carrier for Bezos to practice his dream of space in reality.

In September 2000, Bezos, who is already a billionaire, founded the commercial space company Blue Origin, and began to develop space-worthy aircraft and rocket engines, drawing hundreds of millions of dollars from Amazon’s huge profits to support its development.

When Bezos divorced two years ago, his ex-wife Mackenzie got 4% of Amazon’s stock, but she gave up all the rights of Blue Origin, which shows that Bezos cares about it.

Blue Origin belongs to Bezos’s private projects. The investment comes from his own pockets. It was in a state of secret operation for a time. The public only learned of the company’s existence in 2003. Since then, the business progress has also maintained a mysterious posture. It was not until the “Sherpard” spacecraft named after the famous astronaut Alan Shepard of the Mercury program began test flights that Blue Origin had a sense of existence in the media.

In 2019, Bezos announced that Blue Origin was developing the “Blue Moon” lunar lander, and shouted the slogan “return to the moon and stay there”.

In April of this year, Blue Origin completed the 15th test flight of the Shepard in the western desert of Texas. All the success of the 15 test flights since 2017 may be Bezos’ decision to personally experience space travel.

Bezos also declared: “Allowing millions of people to live and work in space is the most important thing I do.”

Under the cloak of dreams is still business competition

According to some analysts, Bezos went into space to shout to his old opponents, highlighting his determination and confidence.

The earliest known Virgin used the less technically difficult aircraft to carry the spacecraft to bring passengers the experience of weightlessness. Since the concept of space travel was proposed more than ten years ago, Virgin has sold 600 space experience tickets priced between 200,000 and 250,000 US dollars, but the expected commercial flight has been delayed for various reasons.

In recent years, the most popular SpaceX under the leadership of Musk used “Mars Travel” as a gimmick to carry out various tasks. SpaceX has developed reusable rockets, completed many launch missions for commercial and government customers, and sent astronauts into the space capsule and back to the ground. In terms of space travel, SpaceX sold tickets for space station travel and travel around the moon early on.

With the progress of commercialization, SpaceX and Blue Origin have directly competed more and more in recent years. Especially in 2020, the two companies have shown their magical powers for the NASA return to the moon plan order, which is expected to reach a total of 2.9 billion US dollars. Blue Origin has developed a model with a maximum load of 65,000 tons and can provide accurate moon for cargo and passengers. The soft-landing lander is for testing by NASA.

In April of this year, NASA announced that due to insufficient funding, it decided to only choose SpaceX’s interstellar spacecraft system as the moon landing spacecraft due to cost considerations.

Blue Origin immediately wrote a hundred-page report to express solemn protest against this decision, proposing that choosing only one supplier would make the process of returning the United States to the moon full of risks. Blue Origin CEO Bob Smith claimed that NASA’s decision misjudged the advantages of Blue Origin and played down SpaceX’s technical problems.

Musk ridiculed Blue Origin on Twitter not to be outdone, “has not yet sent any spacecraft into Earth orbit.”

Due to Blue Origin’s protests, the NASA and SpaceX contracts are pending approval. Previously, some of its own lawmakers proposed that NASA restart the competition, allowing NASA to get more budget to choose a second lunar lander provider.

Therefore, at such a special time node, Bezos personally fights, completes space travel, and completes corner overtaking, which means more pressure on competitors and rectification of the company’s name.

Although Blue Origin is still high investment and unprofitable, Bezos has always expressed his confidence in the long-term prospects of space development, “We will build a road to space, and then magical things will happen.”

Of course, with Musk’s style, he naturally can’t let himself be suppressed by his opponents, and may soon announce his new trend. The competition between the two sides is just a prologue at this stage.

In all fairness, with the dream of stars and the sea, the giants use practice to verify the technological level in space and open up new areas of competition. It is better than staying on social media to quarrel and express love packages.

More adventurous spirit is not a bad thing.

Private wealth at a record high Above all, the super-rich are...