Home Travel Chefchaouen: Take off the “net celebrity” coat and see the most real... 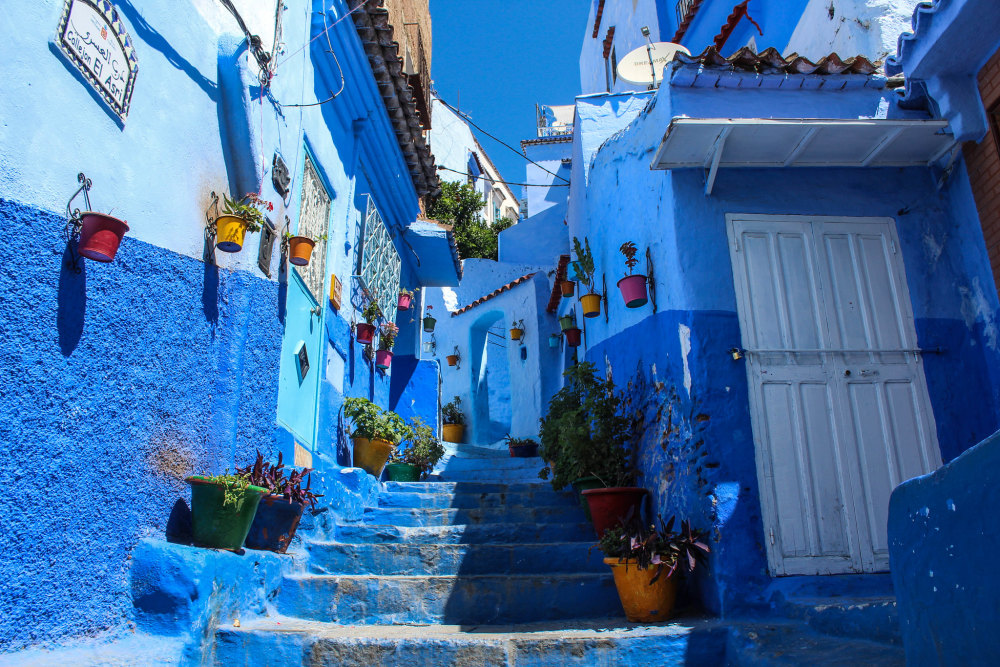 Morocco, located in the coastal area of ​​North Africa, is a standard Arab country. The main ethnic groups in the country are Arabs and Berbers. In recent years, Morocco has become more and more popular with Chinese tourists. When Chinese tourists come to Morocco, they often go to three landmark destinations-Marrakech, Chefchaouen and Fez, especially with the “World.net” Chefchaouen, known as the “Red Ancient City”, has fascinated most international tourists for many years because of its colorful blue, and has become a must-see destination for travel in Morocco. This trip is no exception, but unlike other tourists, we rent a car in Morocco by car. It takes only 4 hours to drive from the old city of Fez to Chefchaouen, and the scenery along the way is mostly mountainous. When I was approaching the destination from the mobile navigation, the car happened to be at a corner of the mountainside. Looking out the window, the small town in the distance was dazzling blue and white in the noon sun, where I was dreaming. Chefchaouen. 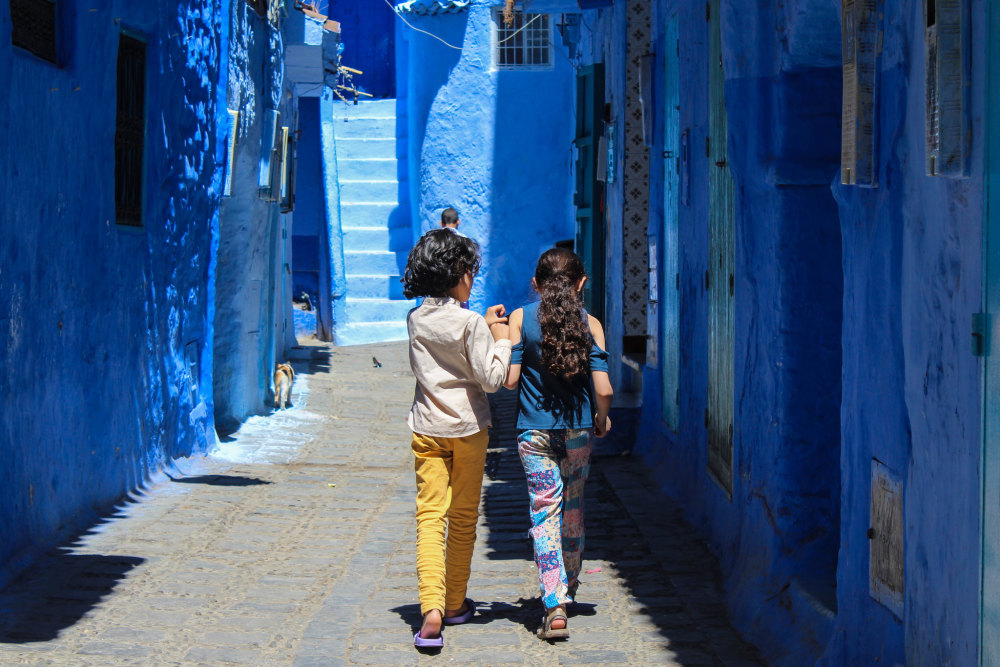 The old city of Chefchaouen is built on the hill, so cars are inaccessible. If the hotel you book is in the old city, you can only park your car in the parking lot outside the old city and enter the city with your luggage. This famous tourist city almost satisfies most people’s fantasy of the fairy tale world, because Chefchaouen is not only full of dreamy blue and fresh air, but also countless winding streets that are just right. Moreover, this old city with a history of more than 500 years has a very strong personality. You must unconditionally accept its personality to fall in love with it, otherwise you will not be able to stay for a day! 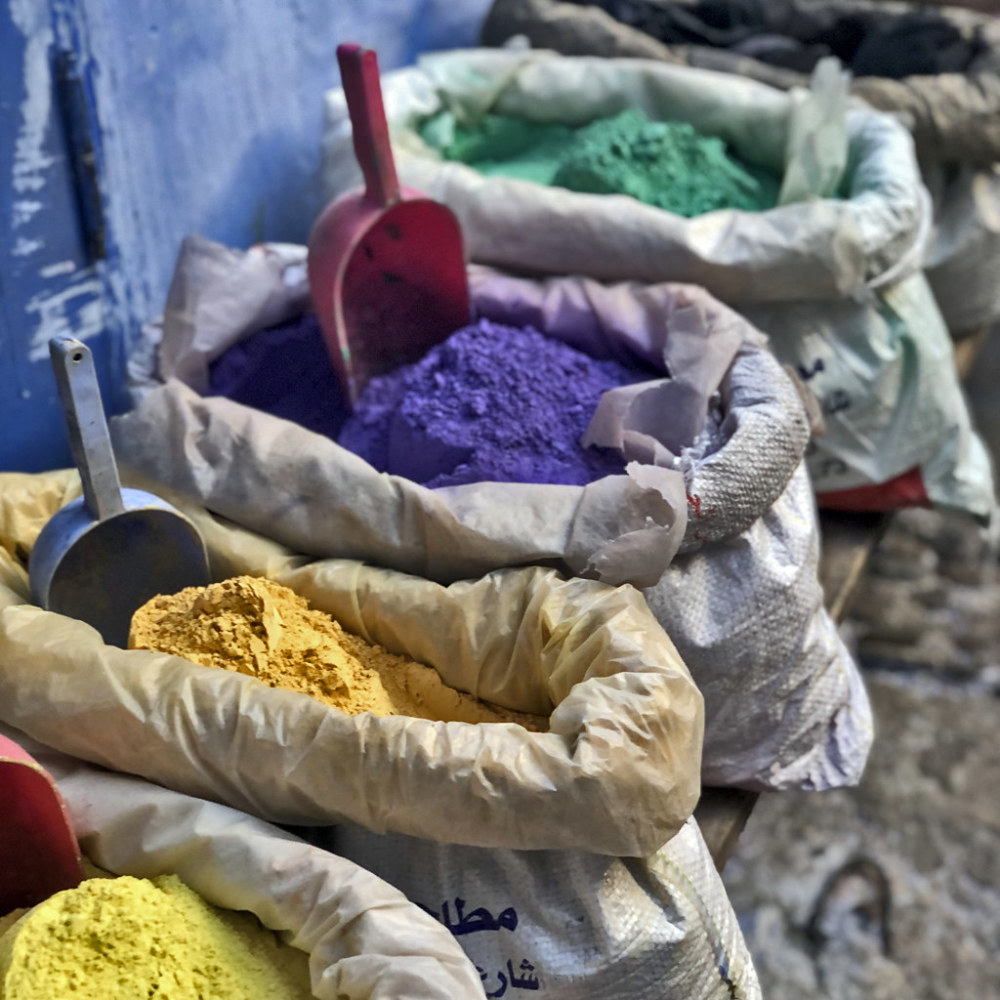 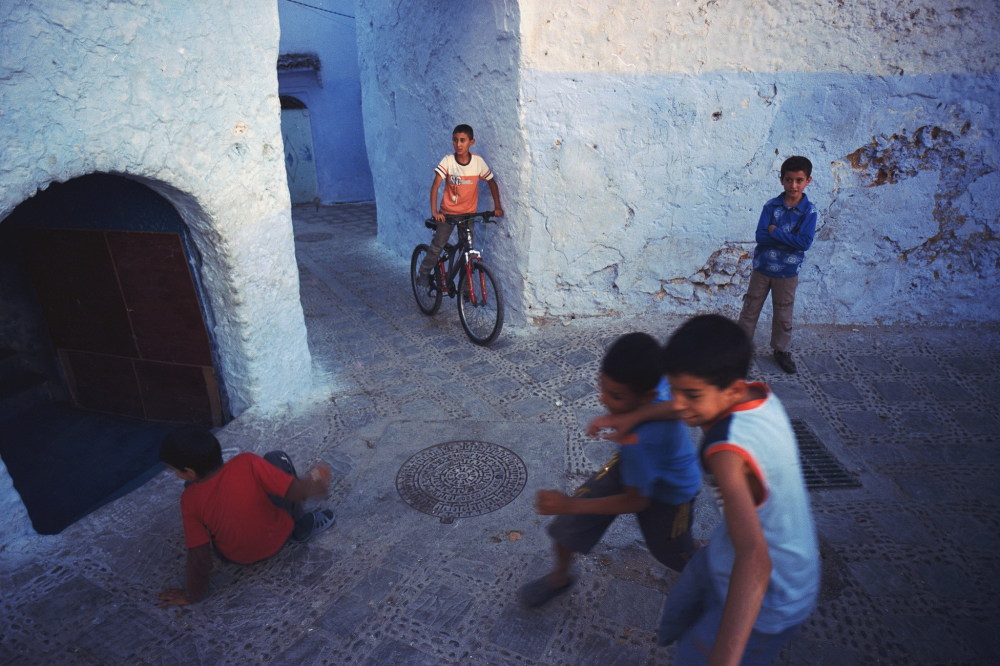 Visiting the streets and lanes of Chefchaouen, we were prepared for most locals not to cooperate with the photo, so before we want to take pictures of the locals, we must first politely ask the other party whether they agree. But as netizens said, local people are very reluctant to take pictures, and the chance of me being rejected is more than 90%! What’s even more exaggerated is that I haven’t even raised the camera, just hung it on my chest. Some ten-year-old children ran over and pointed at the camera and said “NO! NO! NO!” Out of respect, I took the SLR. Put it into the backpack, and only use a small card machine to take pictures of Xiaojing and the streets. There was a saying on the Internet that most of the residents living in the old city of Chefchaouen are Berbers. They are very sensitive to taking pictures, especially tourists who take pictures of them are blasphemy, which will bring them to themselves. Disadvantage, especially bad for women and children. But if the opponent is not a Berber, he will be much more enlightened. So here, we are more shooting the back of the locals. Choose a street view angle, look around, wait for someone to pass in front of me and leave me behind before raising the camera. When we first entered the small town of Chefchaouen, we followed the map to find the hotel booked. However, the hotel was not in the location marked on the map. This made me panic and looked around anxiously. At this time, a young local guy stopped as he walked in front of me and asked what I was looking for. I said the name of the hotel, and he said it in a “Ula-Ula” way. I only understood the sentence “I will continue.” Go ahead for a while”. To be honest, in the face of this winding alley, it is difficult for us to understand what he said. He also saw my doubts and blurted out-“follow me”. Followed him along the road for five minutes and finally reached the hotel he was looking for. It turned out that this hotel was in the hilltop area. I subconsciously took out my change to express my gratitude, but he waved and refused. He said that he was selling blankets at the intersection where he met me, and he welcomed me to patronize. Although we did not buy anything in his shop, he still enthusiastically introduced the good restaurants and attractions around him. His kindness also made us less uneasy and suspicious about the shopping in Chefchaouen’s old city. I even think that the businesses in the old town are as kind and helpful as this little brother. 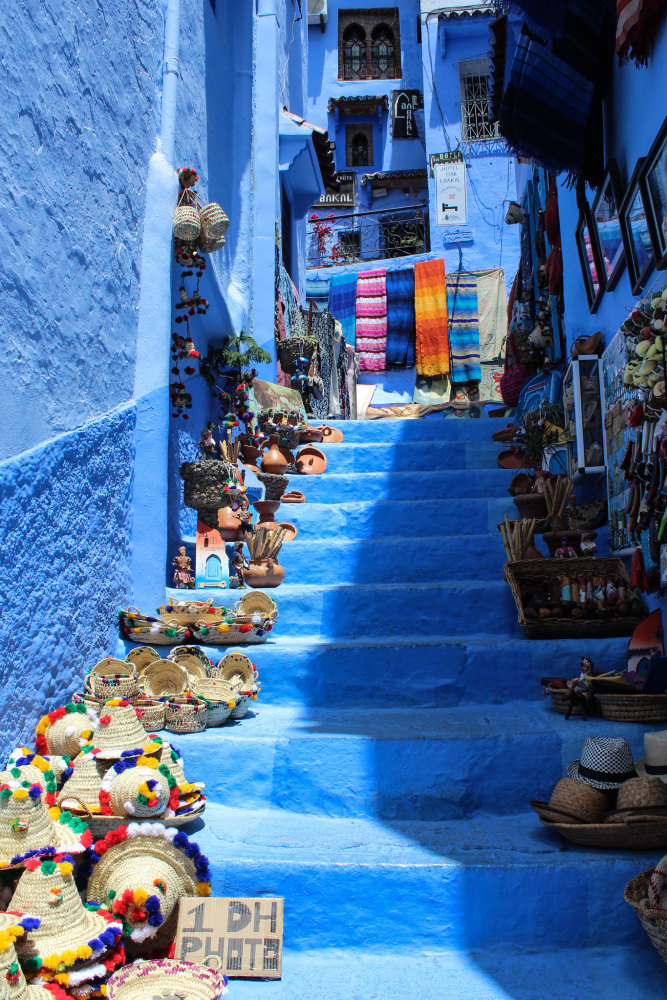 Saying goodbye to my brother, we also put down our guard and walked into the criss-cross streets of the old Medina of Chefchaouen. This is like another world, like an indulgent shopping paradise that will empty your wallet. Copper plates, shawls and jewelry exude an alluring light in front of the shop. Hand-woven tapestries, handbags and rich spices fill your senses, beautiful Moroccan slippers and bottles and jars of various colors. Full of tables and shelves. Tips: You can bargain in Moroccan street or market transactions. Generally, it can be halved on the basis of the vendor’s bid, and then gradually negotiate concessions until the transaction is reached. After completing the transaction, it is best to say Shukran (Thank you in Arabic) with a smile to show your gratitude. 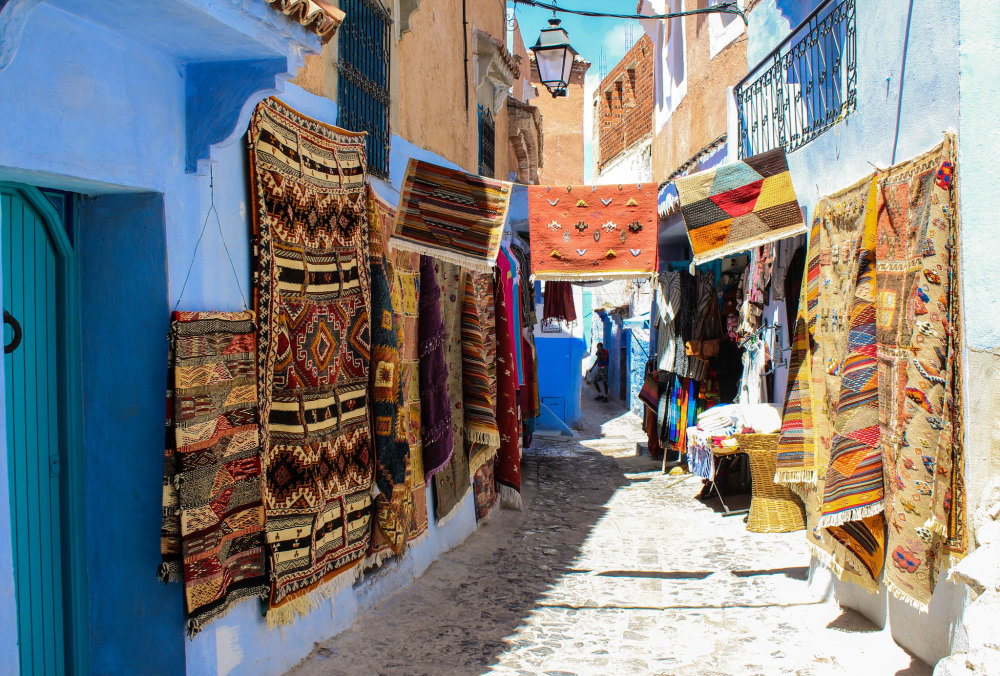 According to the recommendation of the brother of the blanket shop, walked out of the old town and found an Italian restaurant on a street corner. The shop is not big, and there are two girls with outstanding figures and looks taking care of it. We decided to settle the meals here for the next two days, because here you can not only eat delicious pizza and pasta, but also beautiful women to watch, which really makes us have a special liking for this small shop. To enjoy the perfect meal, we walked to the opposite mountain. 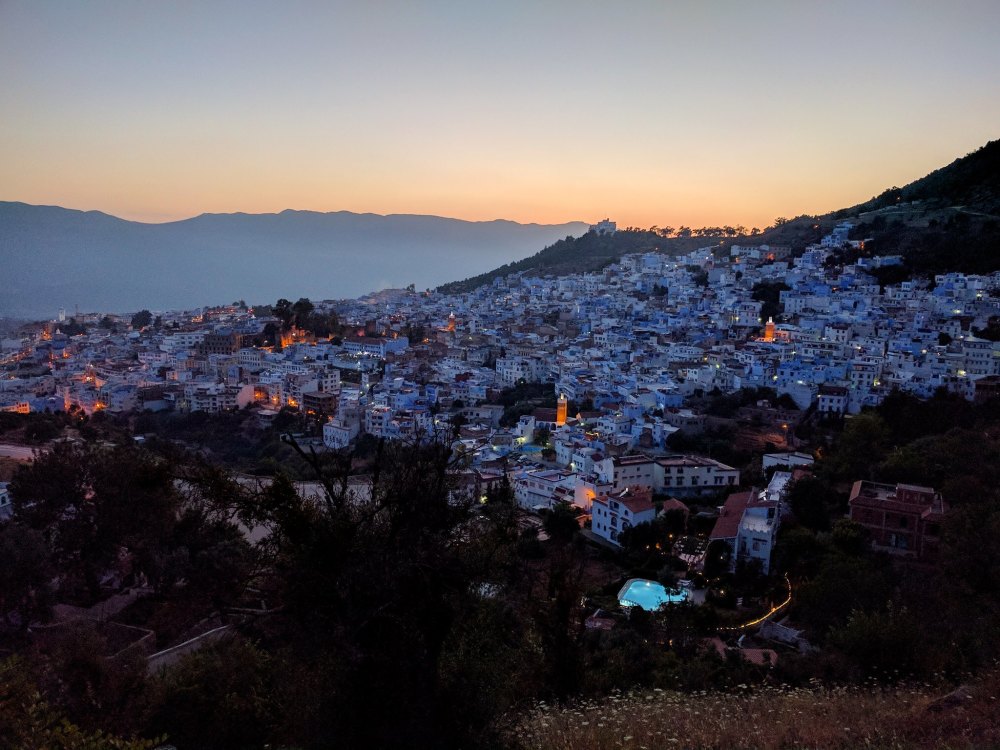 There is a mosque on the hill of Chefchaouen, which is said to be the best place to overlook the entire town. As night fell, there were no tourists left, only we were waiting for the night view of Chefchaouen. The breeze is blowing with coolness, and with the dog barking from time to time, guarding this blue town and the fiery sunset, I feel a little happy at this moment.

If you want a cool summer, don’t miss this place in...