Home Tech What kind of experience is it to let a robot dog walk...

What kind of experience is it to let a robot dog walk catwalks? A Japanese brother has something to say, He invented a robot dog that was 47 cm long and weighed 7.6 kg. It looked plain but took a catwalk on a treadmill.

Some people questioned “How does this look like a catwalk? It’s just like other robot dogs walking!” In fact, the seemingly ordinary steps are actually hidden mysteries. It does not use a complex algorithm structure such as Boston Dynamics, but reproduces the reflex behavior of cats when they walk, and uses the characteristics of animal nerves and muscles to gradually “cat-like” robot dogs.

Not only that, but also published a paper on “Frontiers in Neurorobotics”.

The loop that extends from the knee to the waist, and in turn, the loop that extends from the waist to the knee. This crossover function is called the “reflex circuit” in research, and it can produce a stable gait and leg movement trajectory. Recent studies have also shown that cats do not need complex interactions of nerves within the brain when walking, but instead use this reflex circuit to perform stable movements. Reflex circuit and reproduction of muscle characteristics Then the problem comes again. The robot dog has no muscles or nerves. How to apply this “reflex circuit” to the robot dog? There are two main problems to be solved here. First, the modeling of muscle characteristics. The Japanese brother used the Hill muscle model to reproduce the muscle characteristics of the robot dog. 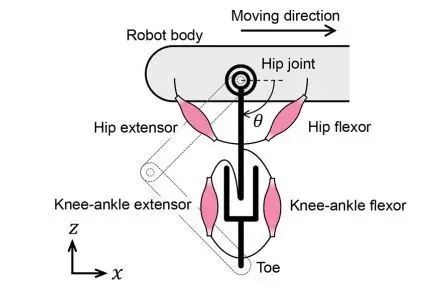 After recreating the muscle model, it is necessary to establish a “reflex circuit” model between the robotic dog’s waist and knee extensors. The Japanese brother has embedded the excitatory reflex pathway in the muscle model. If the knee joint receiver senses the ground reaction force, the muscle will extend the signal to the waist receiver; conversely, if the waist extensor muscles are fully extended and produce tension, Then the muscles will “feel” the signal to start, and transmit it to the knee joints to change the posture.

Body: Font size 16, dark gray (R52 G52 B52), aligned on both sides, margin 8, line spacing 2 Robot dog’s “catwalk” walking experiment Come on, the models are all built, and start walking on the treadmill! 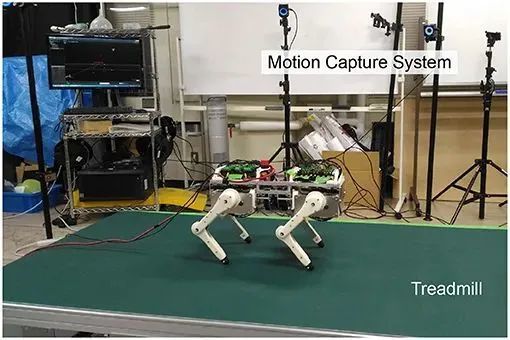 Put the robot dog on the treadmill without pressing the switch. Once the receiver on the foot obtains the reaction force from the ground, it immediately activates the reflection circuit.

The first two steps were a bit staggering, but the more you go, the more stable you go.

The robot dog is equipped with a microcontroller (Teensy 3.6) to provide advanced control. The angle information received from the motor driver simulates the virtual muscle and reflection circuit, and commands the target torque to reproduce its characteristics to the motor driver.

When the reflex circuit of the robot dog is cut off, the dog’s walking will become unstable, and the phenomenon that the feet cannot be lifted from the ground occurs.

The Japanese brother who makes the robot dog walk catwalk is a graduate student of the Department of Mechanical Engineering of Osaka University. He said: “Most of the four-legged robots use the central transmitter (CPG) for stable walking. Our research proves that it is novel. The reflection circuit can also give the “robotic dog” a stable gait, realizing a robot that can move as efficiently and flexibly as an animal.” [Reference link] https://www.frontiersin.org/articles/10.3389/fnbot.2021.636864/full https://www.youtube.com/watch?v=-iLHRhvDccA This article is reproduced with permission from Robot lecture hall (ID: RoboSpeak ), the original title is “The robot dog gradually “cats”,” using simple reflex circuits and muscle reproduction to make the robot dog walk catwalks! 》

British retailers have called for a stimulus package for procurement from...

Huyền Nhung - April 16, 2021 0
Some famous British retailers are calling on the Government to launch a 'relief procurement' plan to support stores for their reopening from April 12,...