Home Tech Chinese astronauts are called taikonaut in English: it has been widely used... The European Space Agency congratulates the China National Space Administration on the successful launch of the Shenzhou 12 manned spacecraft, which is used in the text. 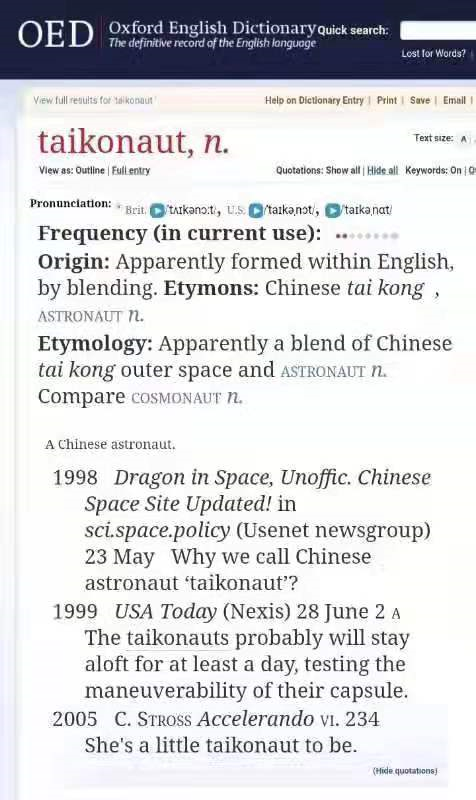 The term taikonaut has been officially included in the Oxford Dictionary. On June 18th, at the launching ceremony of the online themed publicity and interactive guidance activity of “Write Youth Huazhang on the Motherland” held by Peking University, the “Space Hero” Yang Liwei, who had just arrived from the launch site, said: “Everyone still remember that the international astronaut was called astronaut, but we succeeded in creating a new term. We called the Chinese astronaut taikonaut.” “The word taikonaut was included in the Oxford English Dictionary in 1998.” Ma Haolan, director of the English editorial office of the Commercial Press, told The Paper that at that time, the development of Chinese aviation technology, foreign scientific magazines and some media had already adopted it when reporting. The word “taikonaut”. However, they have not yet verified whether the word was originally created by the Chinese or by foreigners from Pinyin when they reported on China’s spaceflight. Ma Haolan introduced that “taikonaut” is a word composed of “pinyin + English ending”. The first half of “taikon” comes from the Chinese pinyin of “space”, and the second half of ending “naut” can represent “astronauts” in English. People, “In my understanding,’taikon’ is equivalent to a title, because it comes from the Chinese pinyin, so it specifically refers to the identity of Chinese astronauts. It has a national symbol and distinction, and’naut’ represents professional identity. , Put it together to form the word.” In fact, as the only three independent manned space nations, the US, Russian and Chinese astronauts all have specific English names. The name of astronauts in the United States or other countries is generally “astronauts”, and Russian (or Soviet) astronauts are called “cosmonauts”, which is derived from the word “universe” in Russian. Ma Haolan said, “taikonaut” is a typical “intervention word”. In English, there are many intervention words of this kind. “For example, tofu (tofu), jiaozi (dumpling), etc., are all intervention words.” But she also admitted that words like “taikonaut” are not entirely pinyin, but “pinyin+English” combined words are rare in English. “At present, I can only think of this one.” “This reflects the development of our country’s space technology. At first, only the United States had a vocabulary specifically referring to its own astronauts, followed by Russia, and then China. This shows that China’s technology has developed to this level and its national strength has reached this level. China has This type of technology is unique to this country, and English will use a word to reflect it.” Ma Haolan said that language is the embodiment of real life. In Western societies that use English, it is generally recognized that the three countries of China, the United States and Russia The powerful space and aerospace technology simply created three words specifically referring to the astronauts of these three countries, so that the expression is clear and concise, and can be read without any other signs. “This word also reflects the importance of this country. Respect.” The staff of the “English-Chinese Dictionary” compilation office said that “taikonaut” is a way of “combining Chinese and Western” words. “The appearance of this word shows that our country’s aerospace development is getting better and better, and it has become a major aerospace country. The English-speaking world believed that there should be a special word to refer to Chinese astronauts, so they added Chinese elements to English and created the word taikonaut.” Ma Haolan said that “taikonaut” is already a commonly used word in the English-speaking world and has a high degree of recognition. But this term is not very popular among Chinese people who learn English. The reason is that on the one hand, the application range of “taikonaut” is not wide, on the other hand, “taikonaut” has not yet entered the field of vision of textbook writers. In elementary and middle school textbooks, the term “astronaut” is still used when referring to space-related content. This phenomenon is also reflected in other Chinese intervention words, such as “dumpling”. Nowadays, “dumpling” is commonly used in English textbooks for elementary and middle schools in China. However, this word means food with “noodles wrapped in stuffing” and cannot be used exclusively. Refers to Chinese dumplings, so “jiaozi” is now mostly used in the English-speaking world. “I think with the development of China’s space technology and the enhancement of national power, these words that reflect China’s unique social culture and history and borrowed from the past in Chinese should also be taken seriously in English teaching. We very much hope that these words will be regarded as formal Put these words in English teaching. As a Chinese, you should know these words in particular.” Ma Haolan said.

The dazzling is not only the appearance, but also the music-Jin...

editor - June 22, 2021 0
Copyright statement: The pictures and texts are original, copyrighted, reprinting or quoting is prohibited without permission or authorization. Life is to...