An Giang is an area with a lot of potential for solar power development, this locality has 100% of the area receiving solar radiation energy with an average annual sunshine hour of 2,400 hours. The development of solar power combined with agricultural production is a solution with dual benefits when it comes to both generating electricity value and economic value from agricultural products. In particular, taking the initiative in local energy sources, ensuring sustainable development, opens up prospects for poverty reduction, especially in areas with a large number of Khmer ethnic people. 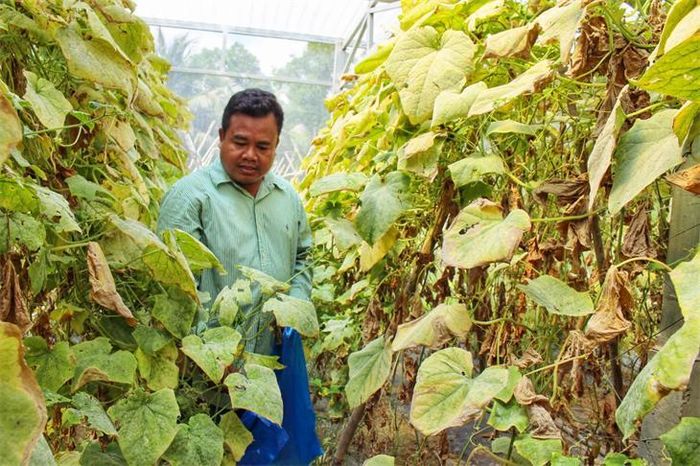 The combined model of cucumber production under the solar array of Mr. Chau Hon’s family brings a profit of 200,000 VND/day. Photo: Hong Diem Sustainable development model In 2018, the Green Innovation Development Center (GreenID) conducted research and put into practice a model combining agricultural production and solar power. According to GreenID, the model is designed according to the standards of rooftop solar power installed on construction sites, greenhouses planted under the guidance of Electricity of Vietnam (EVN) with a capacity of 45kwp installed on 400 square meter area. With a capital of over 900 million VND, the model will be completed and connected to the power grid in December 2020. To ensure plant efficiency, below the photovoltaic panels are designed at a distance of 1-2m. On average, the system produces 103kwh of electricity per day. In the first 3 months of 2021, 4,471kwh of electricity will be produced from this model (equivalent to 22 million VND). This is the first model with the participation of 3 parties (people, businesses and non-profit organizations). Accordingly, the enterprise will withdraw support capital in the first 10 years, then will hand over the entire system to GreenID and households participating in the model. After 20 years, the model will be handed over to households for management. The installation of solar panels above combined with growing vegetables and colors below not only creates additional income from selling electricity, but also makes the most of the arable land area, resolving conflicts in the use of resources. raw land. In fact, the crops grown underneath the electric panels have higher yields and better product quality. The model is expected to open up new directions for local agriculture. Truong Kien Tho, Deputy Director of the Department of Agriculture and Rural Development of An Giang province, said that this is a model that brings dual benefits, when combining agricultural production with solar power, helping people have clean electricity. , develop local agricultural production, and bring stable income for farmers. Open up a new direction Realizing the economic benefits that the model brings, Mr. Chau Hon (40 years old), from An Hoa hamlet, Chau Lang commune, Tri Ton district, An Giang province boldly and the research team developed the model on the land of family. From the beginning of 2021 up to now, the research team has cooperated with the project team and Mr. Hon’s family to experiment with water spinach and cucumber plants to calculate the appropriate level of cover under the solar panels and compare. with growing plants outside. The results show that, grown according to the above model, both plants grow well and give higher yields than those grown outside. “The research results of the pilot model will be documented to share with stakeholders and promote the process of promulgating appropriate policies for the development of a combined model of agricultural production and solar power. God. We will survey and replicate the model in areas with suitable conditions in An Giang province,” said Mr. Truong Kien Tho. Mr. Chau Hon excitedly said: “Compared to growing outside, cucumbers are grown under shaded solar panels, with very few pests and diseases, the plants grow well, the fruit setting rate is high, the fruit is even and the fruit is uniform. beautiful, yield higher than growing cucumber outside about 30%. On average, every day, I sell about 30-40 kg for 6,000 VND/kg, I earn about 200,000 VND, much more leisurely than rice production. Ms. Pham Thi Nguyet, Vice Chairman of Chau Lang Commune People’s Committee said, Chau Lang is a mountainous commune with special difficulties with more than 62% of the population being Khmer, the poverty rate is still over 3.4%. People mainly depend on agricultural production. The development of agriculture in combination with solar power has initially helped farmers change their traditional farming practices and adapt to new farming techniques to create dual incomes on the same land area. This is a model that can help many farmers get out of poverty and become well-off. “However, the replication of the model faces many difficulties due to high investment costs, the arable land of many households in the commune is far from the national power transmission line, so at present, this model has only been implemented. experience with Mr. Chau Hon’s family. With the benefits that the model brings, hopefully in the near future, there will be policies to develop this model” – Ms. Nguyet pondered.

Phương Thảo - June 18, 2021 0
The all-new Archer Maker aircraft or 'flying taxi' is a zero-emissions transport vehicle equipped with an electric motor, it is extremely quiet and does...