The epidemic situation in many countries around the world is under control, epidemic prevention regulations are relaxed, people can return to normal life.
Hoping for a dream summer vacation

Mr. Gabriel Stulman has just reopened his restaurant called The Jones in New York (USA) after a year of closure. Although the restaurant will have to practice social distancing, it’s much better than closing anyway. “ I am very happy and optimistic ,” Mr. Stulman told the Wall Street Journal. According to statistics from the online table booking platform OpenTable, the number of table reservations at restaurants across the US has reached 100% compared to 2019. Cultural activities also began to return to serve the entertainment needs of the people. The San Francisco Orchestra opened its first live concert this year, and the Kansas City Orchestra plans to perform again later this month. In Europe, people are equally excited when schools, shops and beaches reopen. Spaniards poured into the streets dancing and chanting “freedom” as the travel ban was lifted. Ireland lifted the ban on domestic travel and gradually allowed non-essential services to reopen. Germans congratulate each other after the country announced the third wave of infections was under control. The European Union has officially approved the reopening of borders to vaccinated travelers or visitors from safe countries, providing a glimmer of hope for Europeans for a dream summer vacation outside. Mediterranean beach after a year “hidden” in the house. Tourism, aviation recover In the long queue at Gatwick Airport (London, England), husband and wife Keith and Mr. Janice Tomsett can’t wait to fly to the beautiful Portuguese island of Madeira for their summer vacation. “ After 15 months of being locked in, today’s trip was amazing! ” said Mr. Tomsett. 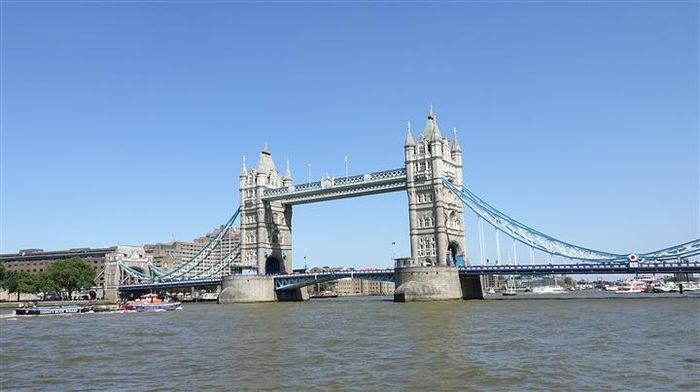 Tower Bridge in London (UK) will be bustling again when British people’s lives return to normal (photo: Duc Minh) Amanda Brown is also eagerly waiting to fly from London to Faro (Portugal) to meet her boyfriend. The two have been apart for 8 months and she had to cancel her flight 6 times because of the epidemic situation. I call this trip “ can’t wait i”. “ I am very excited. I didn’t sleep last night. Great to see everything back to normal ” shared Amanda. The above story was recorded by The Sun at Gatwich airport when the UK’s summer tourist opening policy took effect. British people can go to tourist destinations on the safe list without having to be quarantined when returning. This opening has contributed to helping UK airports become more crowded in recent days. In Greece, tourists started returning to the country after the border was opened. “ People are very optimistic, the number of bookings has increased a lot in the past two weeks. The tourist season will return soon “, Dimitris Lianos, mayor of the island of Naxos (Greece) told AP.

An attraction in the city of Barcelona (Spain) is expected to welcome back many tourists after the travel ban is lifted (photo: Duc Minh) Airports across the US have also been crowded again after the tourism industry recovered from March 2021. Southwest Airlines data shows that bookings for summer vacations are quite high. If the situation continues to be positive, in this June, the airline may reach the milestone of the number of flights performed in the same period in 2019 – when there was no epidemic. With American Airlines, by the end of April 2021, the number of daily bookings has returned to the level of 2019, even though international flight tickets are not included. Vasu Raja, Chief Revenue Officer of American Airlines, said: “ During peak holidays or holidays, the demand for flights is much greater than the supply “. The fact that people in many countries are optimistic about returning to normal life shows that the COVID-19 epidemic has been well controlled. In the near future, depending on the speed of vaccination of countries, COVID-19 will be repelled and all activities of the world economy will recover and develop strongly.

Fall in love with the moment when the cubs hold hands...

Anh Quý - June 9, 2021 0
Wild animals in addition to their familiar images of aggression and ferocity, they also have very 'life' moments that we do not always have...