Archaeologists have excavated the ancient Roman cemetery and found 17 decapitated bodies and believe that these people were executed for violating Roman law. However, this statement is controversial among researchers. 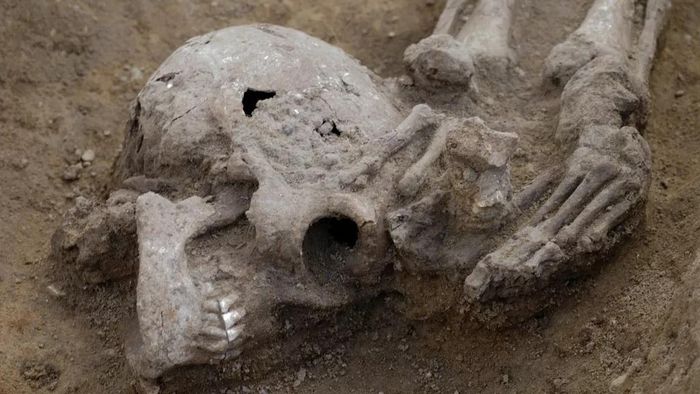 One of 17 decapitated bodies found in an ancient Roman cemetery. The cemeteries held the burial of 52 people, and 17 beheaded bodies including 9 men and 8 women and all were over 25 years old at the time of death, a team of researchers reported in an article published online May 19 in the British journal Britannia. In many cases, the heads of the decapitated people were buried next to their feet and the pottery was placed in the position where their heads would normally have been. Some bodies were also laid face down in their graves. Researchers believe that those who were beheaded were executed. They note that the number of criminals in Roman law increased dramatically during the third and fourth centuries, around the time these skeletons were buried. Remains of archaeological evidence shows that the Roman army used Knobb’s farm as a supply center and they would take strict action if there was any violation. “During the third and fourth centuries, the penalties imposed under Roman law became more and more severe. The number of criminals applying the death penalty increased from 14 at the beginning of the third century to about 60 by Constantine’s death in 337 AD,” The researchers have noted that security concerns are one of the reasons for the increase in the death penalty. During the third and fourth centuries, there were many civil wars in the Roman Empire, many of which were fought to be crowned emperor. Despite the possibility of execution, individuals were still buried with ceramic pots and in some cases placed in coffins. Isabel Lisboa, the archaeologist who led the excavation, said: ‘A beheaded woman had the richest collection of tombstones, buried with two urns and a coal bead necklace. Pipe coal is a type of coal that is easy to glow. Under Roman law, family and friends could demand that the body of an executed criminal be returned for burial. Those executed were likely not slaves, as slaves had no status and likely would not have been buried. Scholars argue Even so, Simon Cleary, emeritus professor of Roman Archeology at the University of Birmingham in the UK, said: “What we know of the sites of Roman judicial executions suggests that they are mainly in cities and towns and have a deterrent effect. Knobb’s ranch is not near any major towns or cities.” Cleary adds that a law made by the emperor in Rome is difficult to enforce in a remote place. It is possible that these people were executed but Roman law may have nothing to do with why they were killed. By the fourth century, the Roman army had for centuries become a draconian rule, with no way back for the common man, says Cleary. Why most of the burials of decapitated people in the Roman Empire occurred in Britain is unclear. Roman Britain can be really weird at times, especially in its treatment of the dead, there are plenty of ritual practices other than beheading or burial that to our eyes look eerie. . To people’s eyes at the time, they could be completely conceivable.” Other scholars have also expressed doubt that Roman law had much to do with the burial of the decapitated. Caroline Humfress, director of the Institute for Constitutional and Legal Studies at St. Andrews in Scotland, said: “I personally think it is very unlikely that the executions on Knobb’s farm were related to Roman legal processes.” “If they have a judicial context, it’s more likely to be localized and involve executions carried out without trial,” Humfress said. However, other scholars argue that these people could have been executed according to Roman law. “The official execution seems to be the best explanation for the Knobb Ranch cases,” said Judith Evans Grubbs, a professor of Roman history at Emory University in Atlanta. He noted that women in the Roman Empire were often the target of accusations of witchcraft and adultery, both of which could have been considered crimes by the Romans. Stunned with the largest, deepest $ 211 million swimming pool in the world 08/06/2021