Germany is likely to let Kai Havertz start against France instead of Leroy Sane, although the Bayern player has more international experience, being used more in the matches before the tournament. Coach Joachim Loew considers Havertz an important tactical option.
Many reputable sources in Germany, including Bild newspaper, believe that coach Joachim Loew will let Kai Havertz start in the match against France. After the friendly matches against Latvia and Denmark, reporters closely followed the team and saw that Coach Loew had set up the starting lineup with Havertz as the main kick. He played with Thomas Mueller, Serge Gnabry in attack. Sane is just a substitute.

The rest of the squad consisted of Ilkay Gundogan and Toni Kroos in midfield; Mats Hummels, Antonio Ruediger and Matthias Ginter play central defenders; Wingers are Robin Gosens on the left and Joshua Kimmich on the right. The goalkeeper, of course, is Manuel Neuer. If this happens, it will be a small surprise for observers. Three years older than Havertz, Sane is considered older, after 30 caps for the national team compared to Havertz’s only 14. In 7 consecutive matches before the tournament, Sane participated in all 7, scored 2 goals, had 2 assists. Havertz only contributed 4, has 1 goal and 3 assists. He, along with Gundogan, Timo Werner, and Ruediger also arrived late to the training camp because they were busy attending the Champions League final with the Chelsea team. Therefore, in terms of continuity, recovery time as well as the performance of the last matches on the national team, Havertz is inferior to Sane. To explain this, German media said that coach Loew is afraid of the ability to attack France. With the trio of Kylian Mbappe, Antoine Griezmann, Karim Benzema in attack, using Sane is like putting a burden on Kimmich’s right wingback shoulder. Compared to Sane, Havertz defended better. In the 3-4-3 system that Loew used in this tournament, the defensive ability of the winger is very important against strong opponents like France. At most, even. But losing the opening match in the group of death was a disaster. 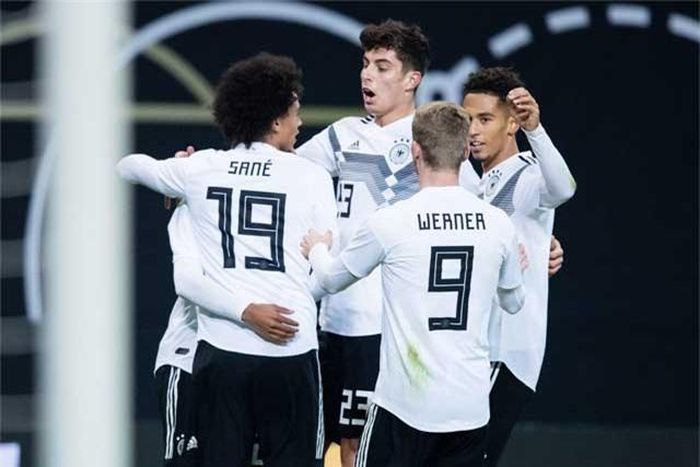 High form at the end of the season at Chelsea helps Kai Havertz (middle) almost certainly start in Germany before the French opponent. In an interview with the press, Rudiger confirmed this to the media: “We have to be ready for one-on-one matches against the opponent. It is not always possible to aim for beautiful football. What is important is improvisation and readiness from the very beginning,” he said. It is possible to imagine the scenario of Havertz combining with Kimmich to “fight” with Mbappe on the wing. Even the central midfielders had to come out to support. Mr. Loew has enough data about this very fast striker, after Bayern clashed with PSG twice in two consecutive Champions League seasons. The Bayern player is no stranger to Mbappe. Hansi Flick, Loew’s former assistant on the national team, who also led Bayern in these two confrontations, is also a reputable source. But saying that does not mean that Coach Loew abandoned Sane. Sane can come into the field in the second half. Sane is better at creating mutations than Havertz, which can come in handy after both sides’ physical decline. Loew understands both players. For Havertz, he considers this a striker “old before his age”, still very young but with a high sense of responsibility, always ensuring his position and teamwork when playing. Sane is even more special, especially when Loew “eats enough” after deciding to remove this player from the 2018 World Cup list. That tragic failure made Loew forced to calculate many options, because of the competitiveness in EURO even higher. This is where Loew’s intellect plays a decisive role. Considering each position, Germany does not lose much to France, although the French players are at their maturity and many German players have not reached the top. But the important thing is how to improvise and use people in a survival battle like this. Loew will have to calculate carefully and correctly, not allowing mistakes. Havertz was more useful after Germany lost to Spain From the 0-6 defeat to Spain in November 2020 and earlier, Germany still often plays 4 defenders and Havertz has to play many positions against his forte. In addition to the attack and winger, he also played as a central midfielder on the television. When changing to a 3-back formation, Havertz is clearly a heavyweight plan on the right. After the defeat, Loew wanted Germany to defend the border better. 0.9 – According to Whoscored, across all club competitions, last season Kai Havertz had an average of 0.9 successful tackles per game, 0.4 successful tackles per game. These numbers of Sane are 0.6 and 0.4 respectively.

PSG are different now, so that the Champions League is no...

- April 14, 2021 0
Overcoming defending champions Bayern, PSG showed their tremendous progress. And more than ever, the Team of Paris is ready to make the dream come...