The reason why Tibet attracts a large number of foreign tourists is undoubtedly because of the unique charm of Tibet. There is a world-renowned sacred mountain and holy lake. There is also the unique local customs there. 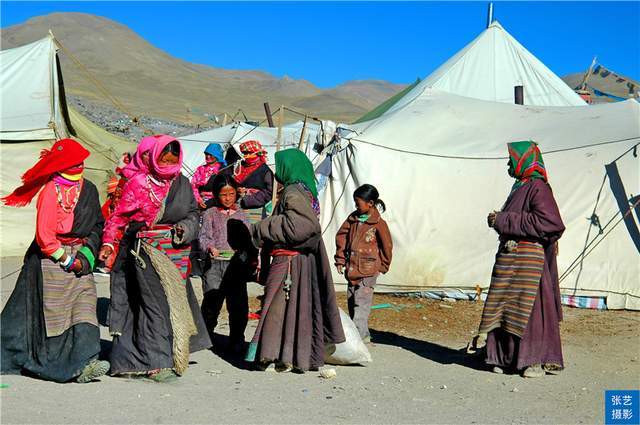 On the way to Tibet, we saw unforgettable beautiful scenery, but what made me more interested was the local customs. I think that is the true charm of Tibet. 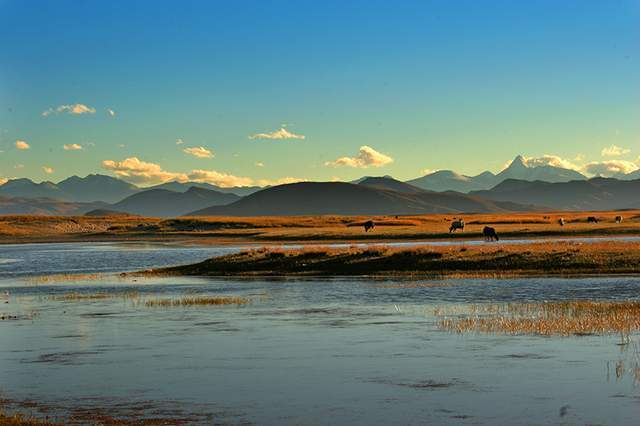 We drove to a small town called Payang Town and stayed here at night. 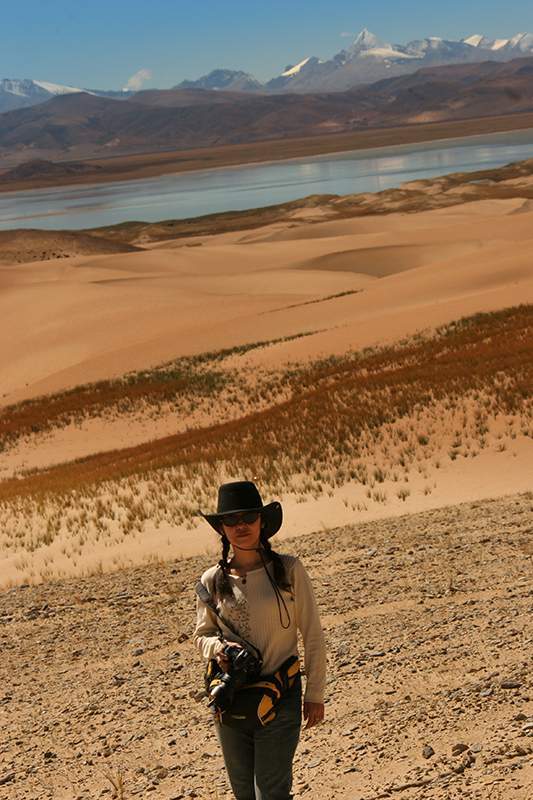 Payang is a prairie town with a western flavor. The streets are full of clean dust. The town is loosely lined with neatly arranged houses. The Tibetan residents who go between the alleys are also very resident in their clothes. 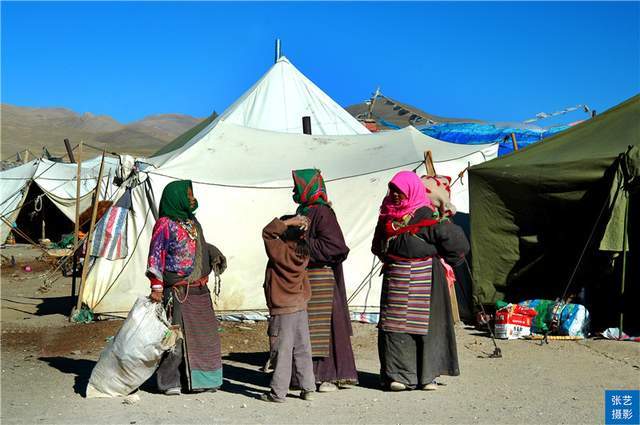 Now the Tibetan compatriots are very Chinese in their dress. In 2005, I saw Tibetan women in Payang town wearing very primitive Tibetan robes. 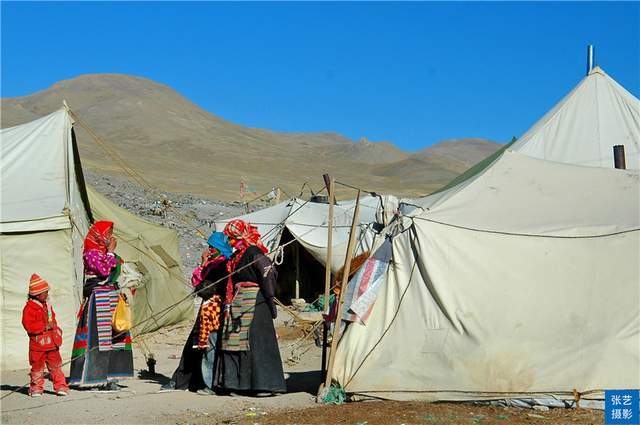 There is also a large pasture outside the town. Cows and sheep swim among the green grasslands and snow-capped mountains, creating a picturesque pastoral scenery. They live in an environment surrounded by mountains and lakes. Seeing them wandering around the town freely, I feel that they are carefree. 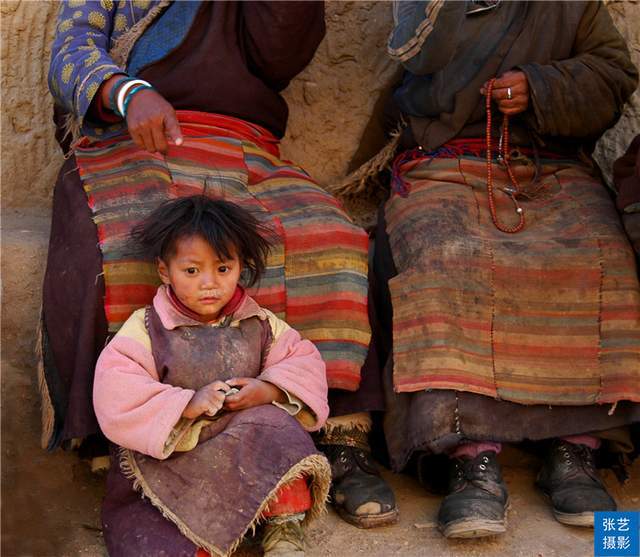 Payang Town is not very big. The square in the center of the town is an important meeting and exchange place for the whole town. There are often many Tibetans hanging out here, and children running around chasing and playing. Many unique pictures of people can be taken here. . 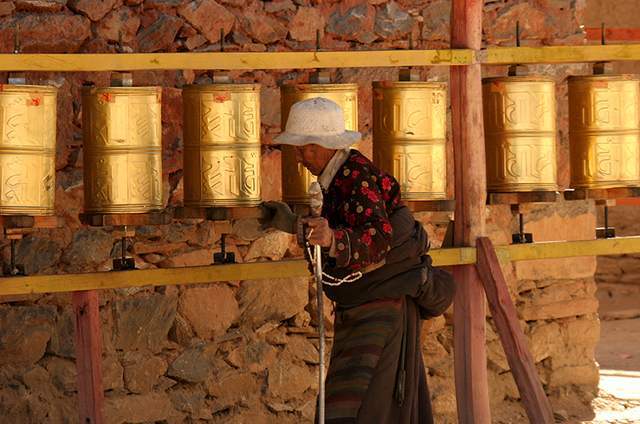 A lot of people walked around here, as if they were celebrating a festival. There was a temple beside the square, and there was a prayer wheel beside the temple. The elderly Tibetan compatriots were walking with rosary beads in their hands and silently chanting Tibetan. After the war, his face showed a very pious look, turning around the prayer wheel round and round. 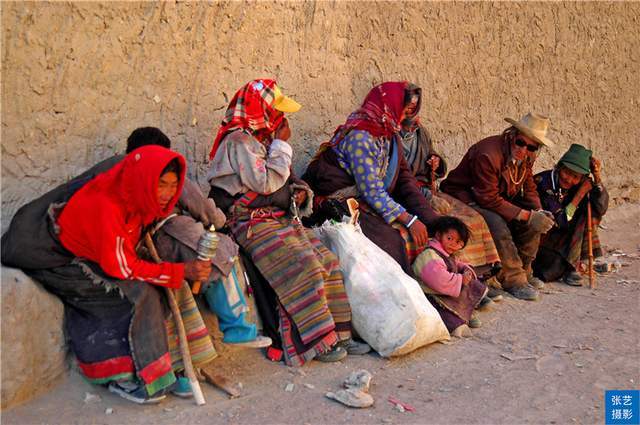 They were wearing shabby Tibetan robes, their faces were dark and red, with sunburn on their faces, typical plateau red. I’m better at capturing the moments when they are soaring. 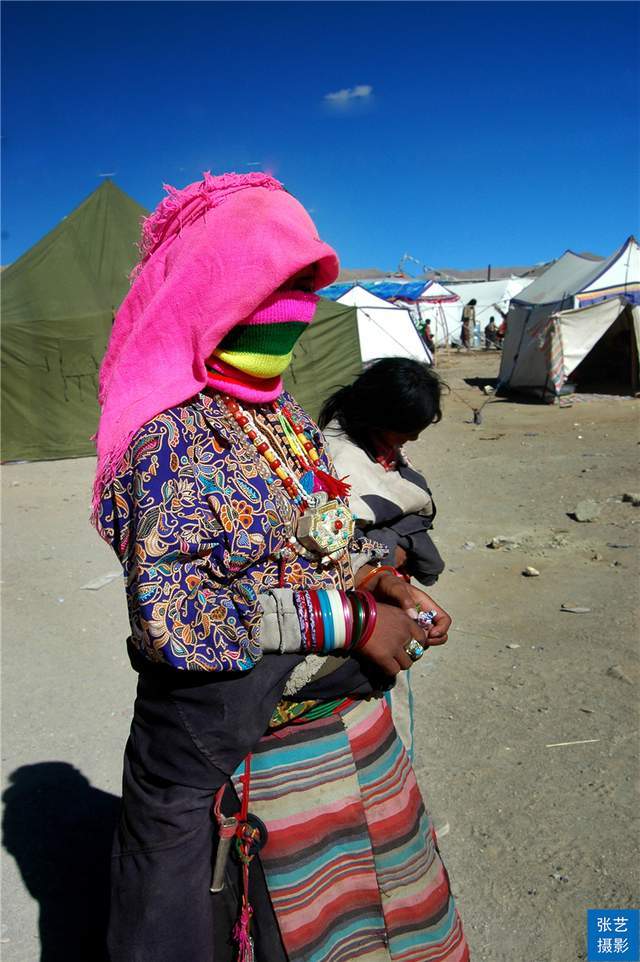 Women’s heads are wrapped tightly with scarves, and they can’t take facial expressions at all. I guess they are tanning. 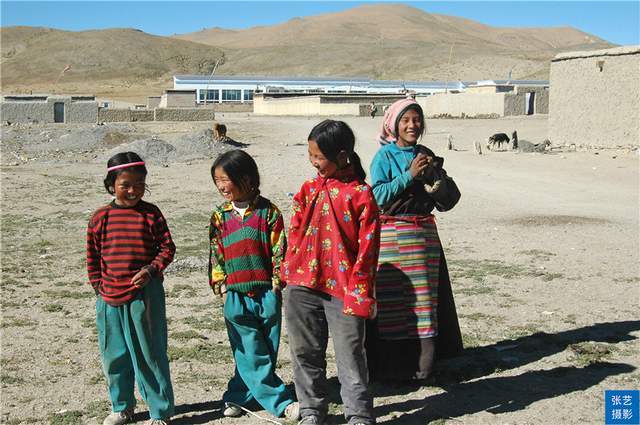 The little girl in the town did not have a scarf on her face, her face was really dark, but she looked very cute! I distributed a pound of candy I bought to the local children, and one by one stretched out the little black hands to ask me for the candy. I was very proud and happy to watch them chewing the candy I bought in their little mouths. I took a lot of pictures of them. 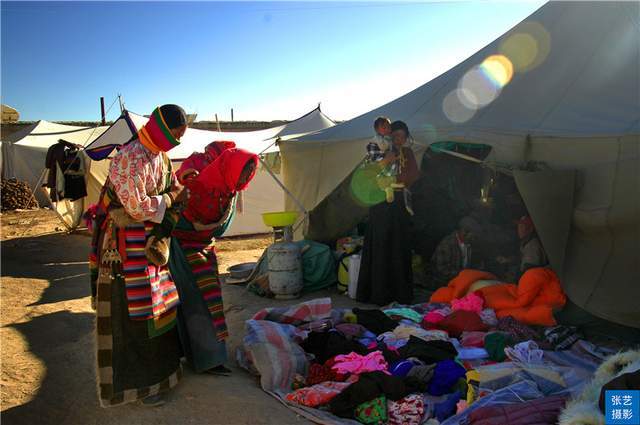 There are many tents set up in the town, and there are many dazzling products in them. It is said that they are Danba Tibetans from Sichuan, who specialize in business. 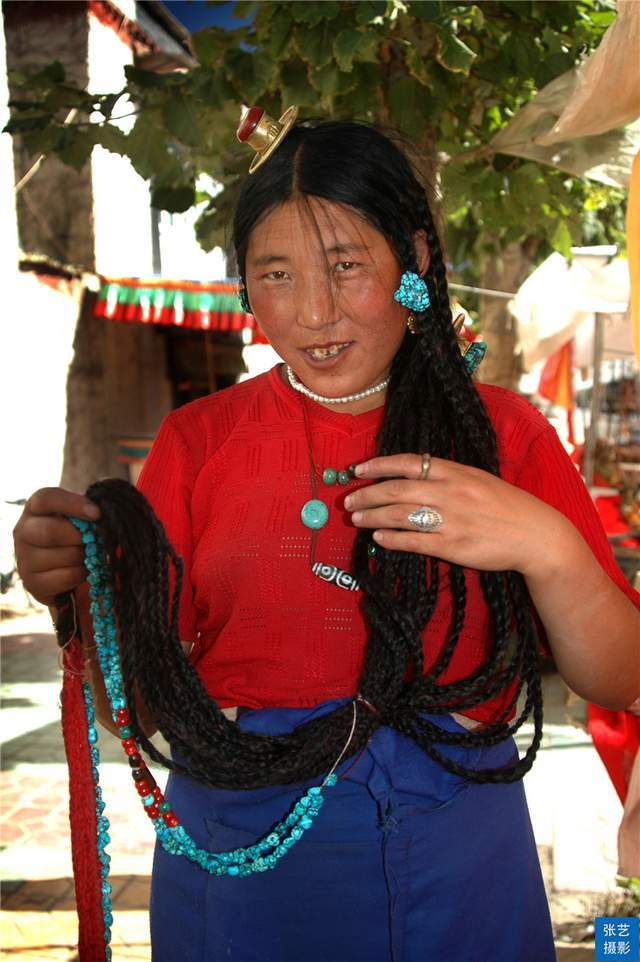 The women are all dressed up very beautifully, especially their headwear is decorated with a lot of colorful accessories, and the braids are also very long, thick and very dark. 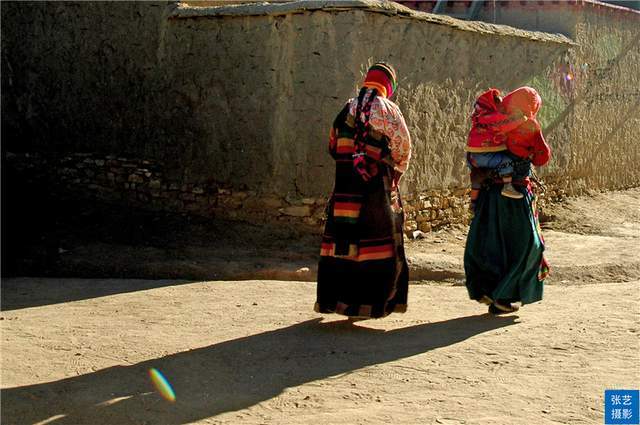 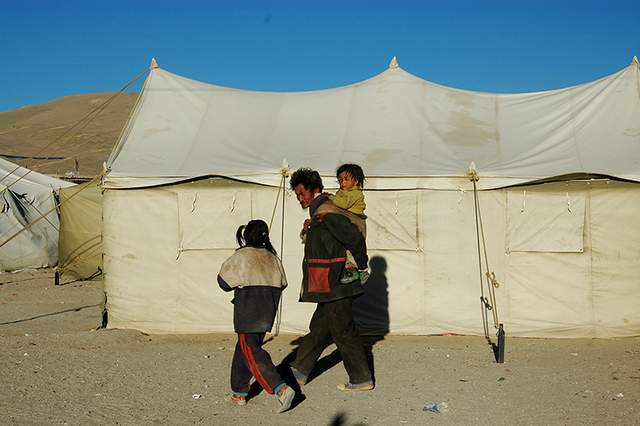 We visited the families of the richest Tibetan compatriots in the area. Their family owned several shops, and the host seemed to be someone who had met the world. He was a soldier and spoke Mandarin very well. His home is very large, spacious and bright. The room is full of Tibetan furniture, which seems to be one of the richest families in the area. 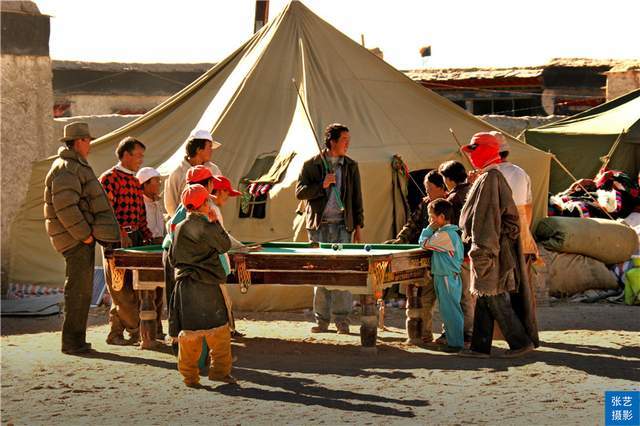 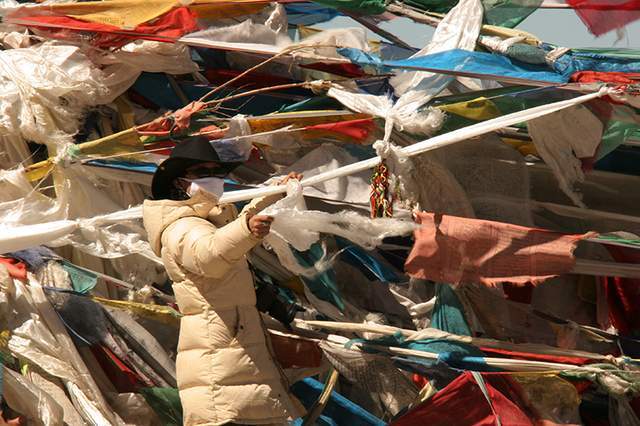 In the evening, the Tibetan driver King Ali invited us to eat raw beef. He went to the village and bought a catty and a half of red raw beef. He personally cooked and cut it into pieces. After peeling the garlic, he told us that it would be raw beef together. Eat, and tell us: This raw beef was not killed today, it was killed yesterday, so it is soulless beef. Hearing these words, I laughed to death. It turns out that Tibetan compatriots are still very particular about eating meat, and they can still have something to do with religion. Many people are afraid to eat the bloody beef. King Ali ate it on his own regardless of the three-seven-two-one. I thought to myself that since I came, I might as well give it a try. I ate three pieces of raw beef and felt that the original raw beef tastes very delicious. Tibetan driver Ali Wang Talking about the Tibetan driver Ali Wang King Ali (nickname) is a legendary figure. He is in his forties and looks very burly, with a typical image of a Tibetan man. I feel that his way of thinking has the way of thinking of Han people. Because he is extremely religious. In many ways, he strictly enforced it in accordance with the patriarchal concept. For example, he doesn’t drink alcohol and never gambling. When he ate the livestock, he could not eat the slaughtered that day, saying that there was a soul attached to the livestock, and he had to eat the next day. When he picked up a piece of chicken and put it to his mouth, he immediately asked the cook when it was killed. This behavior amused us. He once went on foot to Nepal and India to pass through and pay homage to the Buddha. He still has a lot of personal experiences that are very bumpy, so I can’t talk about it here. I feel that he shouldn’t be a driver at all, but that he should be an entrepreneur and a leader. Especially his eyes are amazing. As long as you ask him on many questions, he will answer you very carefully. My friends and I joked that King Ali was like a party secretary, and his speech was particularly straightforward. King Ali is not only a driver, but also owns three Japanese-style off-road vehicles, one of which he drives by himself and the other for rent. He is also a bargaining businessman who is cunning and humorous, intelligent and open-minded. However, in the following years, I saw a travel note written by a traveler on the Internet saying that King Ali had died of cancer. After seeing this news, King Ali’s voice and smile suddenly appeared in my mind, which made me feel good. It’s been too slow for a while. 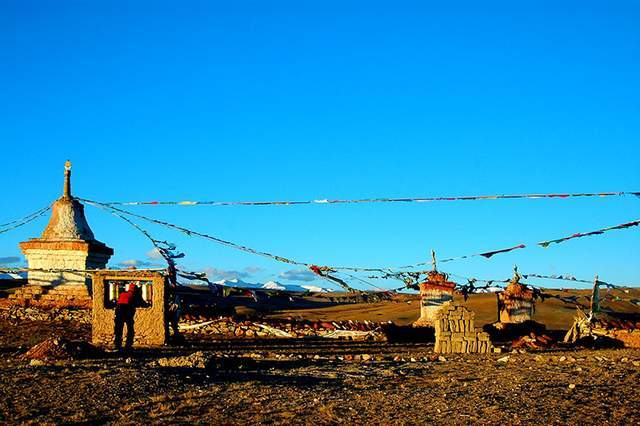 Payang Town is a small town with a special Tibetan style, where you can really feel how Tibetan compatriots live and entertain. I also took a lot of satisfactory photos, which added a lot of fun to my trip.

Nha Trang is crowded with tourists going to the beach, many...