Sino-Singapore Jingwei Client, June 12 (Xue Yufei, Gao Boning) At the end of May, JD Logistics was officially listed on the Hong Kong Stock Exchange and was enthusiastically sought after by the capital market. The current total market value exceeds HK$260 billion. As one of the early institutional investors of JD Logistics, Hanergy Investment was undoubtedly a success. During the 21st Annual Meeting of the Yabuli China Entrepreneurs Forum in 2021, Chen Hong, Chairman and CEO of Hanergy Investment Group, accepted an exclusive interview with Sino-Singapore Jingwei Client.

As a company that has been focusing on investments in the new economy for a long time, Hanergy has created a number of successful classic cases in the past, helping many companies to rapidly grow into industry leaders. In addition to JD Logistics recently, the direct recruitment of BOSS, which was just listed in the United States on the evening of June 11, has also brought huge returns to Hanergy’s investment. Chen Hong said: “Investment in direct recruitment of BOSS has earned about a dozen times.”

“Internet celebrity” products may just be a gust of wind 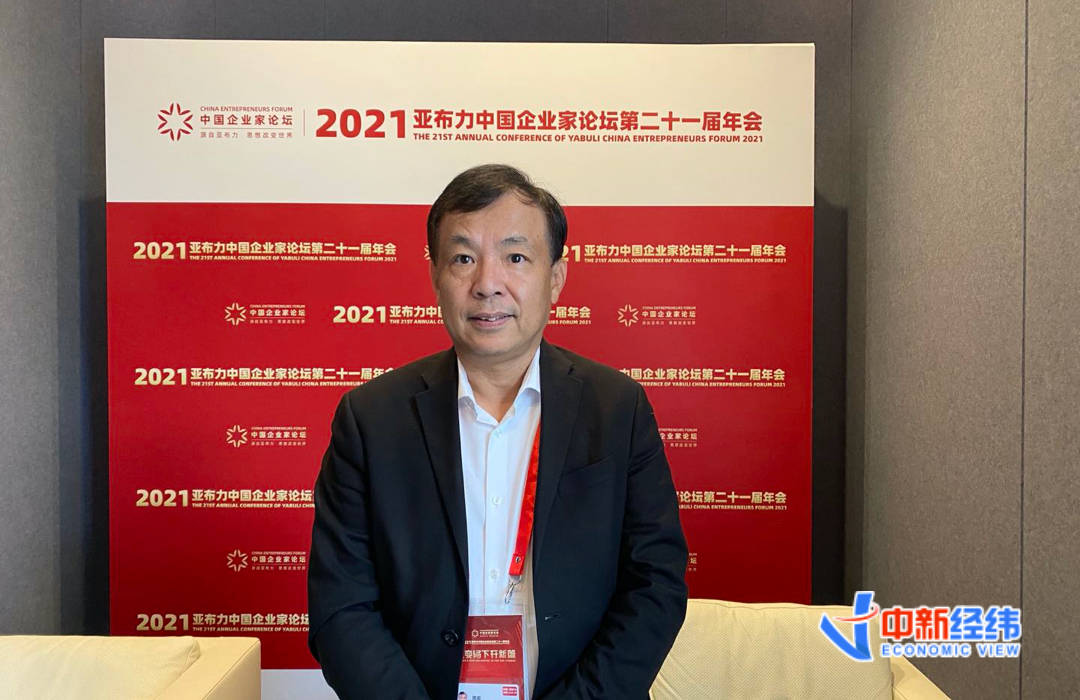 As a well-known figure in the investment banking circle, Chen Hong’s entrepreneurial history began in the United States on the other side of the ocean. He started his business in Silicon Valley in 1993. In 1999, he led the founded GRIC company to land on Nasdaq. One of the Chinese entrepreneurs who led the company to go public.

In 2003, he chose to return to China to start his own business and set up the Hanergy Investment Group. Over the years, the company has invested in and participated in mergers and acquisitions of many well-known companies. For example, in the merger of 58.com and Ganji.com, Hanergy acted as the exclusive financial advisor to Ganji.com, helping it sort out the complicated shareholder background and corporate structure, and facilitate the smooth completion of the transaction; in 2011, Hanergy invested in Chinese Online, the latter of which It was listed in January 2015 and became China’s “first share of digital publishing”. Hanergy’s total investment return on Chinese online shares reached 12.34 times, with an IRR of 79%.

Currently, Hanergy focuses on investments in the Internet economy, technology, consumer and medical fields. He told the Sino-Singapore Jingwei Client: “Invest in China’s new economic industries, choose and hold those scarce resources that have good growth potential. You can withdraw part of it when you need a return, and hold the rest for a long time. In the end, the return will definitely follow. Grow with economic development.”

In 2018, Hanergy invested in JD Logistics because of its new economic attributes. Chen Hong said that JD Logistics is not a traditional logistics company. It has a strong sense of science and technology. It has many of its own things and its service quality is higher than that of its peers. JD Logistics is relatively independent, serving both JD Group and other e-commerce companies. “The scale of e-commerce companies is growing rapidly. There are always a few leading companies, so I invested.”

Speaking of the recent changes in investment trends in the Internet field, he said that since the high-speed growth period has passed, “many Internet companies may not have much growth in their daily activities.” This has led to fewer Internet-related investment opportunities than in the past, but there are still some areas that are relatively hot.

The first thing worth paying attention to is the field of corporate services. Chen Hong believes that China’s To B service enters the development period, and there will be the emergence of leading companies, and there will be growth opportunities. The unicorn that Hanergy has just invested in has a turnover of several hundred million yuan, but its market valuation has reached tens of billions of dollars.

Followed by the medical services and biotechnology industries. He estimated that based on China’s huge population base, there may be one or two medical companies with a market value of hundreds of billions or even trillions in the past two years.

In the past, new consumer areas that VCs were not interested in have also undergone many changes. For example, consumer brands such as Heytea, Bubble Mart, and Yuanqi Forest have emerged rapidly and have become popular “net celebrity” products. Chen Hong believes that this sends a signal, “As China becomes more powerful, consumers, especially young people, will gradually like domestic consumer brands.”

However, he also reminded that in the new consumer field, if a company only relies on a “net celebrity” product to make money, it is likely to be a gust of wind, and after a while, it will quickly disappear. In the past, there were a lot of similar “net celebrity” products. He also said: “If the management team has the ability to grasp a favorable market position when they are pushed up by others, and can provide more related products in their value ecosystem, they may survive. But this is not the case. Every entrepreneur can play it.”

In addition, Hanergy is also looking at areas related to “carbon neutrality”, such as new energy batteries, new infrastructure, and electric vehicles.

Each venture capital and investment bank has its own investment style. For Hanergy Investment, Chen Hong introduced that Hanergy will generally make a controlling acquisition of the target company with strategic investors. After the holding is achieved, it will use its resources and platforms. Empower the target company to help the company grow. This is also a common style of play between KKR and Blackstone in the world.

In 2005, Chen Hong and his partners made a huge return on their investment in Elevator Advertiser Frame Media, and later entered the Harvard Business School textbook as a case study. The business model of elevator advertising still exists today, and its positioning characteristics are conducive to precision marketing. However, at that time, the market share of elevator advertising was very scattered.

He recalled: “At that time, the company we first invested in had a turnover of 30 million yuan, and the company was insolvent. We went in and held holdings first. Within a few months, we integrated seven or eight companies that do elevator advertising in first-tier cities. Quickly occupy 70% of this market segment.”

Chen Hong said that the benefits of integrating this sub-industry are twofold. First of all, each company does not have to fight price wars, and the competition is smaller. Secondly, as the scale becomes larger and the company’s negotiation ability becomes better, the amount of an order negotiated by an advertising salesperson may change from 500,000 yuan to 10 million yuan. After Frame Media achieved rapid growth, Hanergy assisted in the completion of Focus Media’s acquisition of Frame Media as an exclusive financial advisor. Hanergy’s overall return on investment reached 93 times.

Hanergy Investment has its own criteria for the choice of specific companies. He mentioned that, firstly, it depends on whether the company has the ability to increase its own safety and use its existing market position to continuously innovate to resist risks; secondly, it depends on whether the company can lay a solid foundation in its business field.

He also said that Hanergy will not invest in companies that diversify prematurely. When an enterprise is satisfied with its current market position and intervenes in an industry that it is not good at, it may cause funds to be dispersed and ultimately fail.

In the venture capital circle, there has always been a saying that “investing money is also investing in people”, that is, the quality of the founder and founding team is fancy. Chen Hong also agreed with this statement. He jokingly said, “For start-up companies, this is the only stage that can be seen.”

Hanergy has invested in a start-up company that uses artificial intelligence to detect human breast cancer, lung cancer and other diseases. The research team basically graduated from Peking University with strong professional and technical capabilities. “We believe that with the increase of big data, artificial intelligence will be used to solve some medical problems in the future. In this field, there are many companies that are much larger than this company, but we are very knowledgeable about the technology of the company’s founding team. I admire it very much. The CEO was in charge of China’s medical business at Siemens. It’s very comfortable to talk about. We feel that the company’s people and technology are good, but it’s almost capital and channels. Hanergy was the first to invest. It became the largest shareholder and introduced the business to this company,” he said.

“Put money in” is the real challenge

Chen Hong has always had an external view that the venture capital industry is becoming more and more concentrated, and the Matthew effect is becoming more and more obvious. He also told the Sino-Singapore Jingwei Client: “Large mainstream investment companies have increasingly their own style. You have no style and it is difficult to invest in good projects. The first one is unlikely to give you this opportunity, and the second One is that you can indeed look for companies that no one is optimistic about to invest in, but there are very few opportunities to miss.”

He went on to say that more than a decade ago, it seemed that any person or company could be an investment fund. Now it is not. Investment has become more and more professional. How to systematically invest and get returns is very critical. In the future market, there will not be so many VC and PE funds.

Looking at China’s fast-growing new economic industry, there are many investment opportunities. In each industry, one or several leading companies will emerge to become future leaders. An excellent investment team must first find potential entrepreneurs. However, the biggest challenge is not here. Chen Hong said that smart people can see what a good industry and a good company are, but after finding a company, investment institutions must meet the core demands of entrepreneurs before they can invest funds. This is a real challenge to investors.

For example, he said, some companies may want to connect with Internet companies to seek traffic, and non-head funds do not have much effect in this regard. And this is where Hanergy’s advantage lies. Hanergy has participated in the mergers and acquisitions of about a quarter of large-scale new economy companies in China, and has cooperated with companies such as Tencent, Alibaba, Baidu, JD.com, and Toutiao.

Investment banks are not superior, but serve enterprises with a “Party B” mentality. He said: “I ask our investment team to maintain the’Party B’mentality. When you invest in others, you also ask others to accept investment and to empower and help them. In this way, the work mentality is different.” (Zhongxin Jingwei APP)

Five years of right to an account Criticism of high basic...