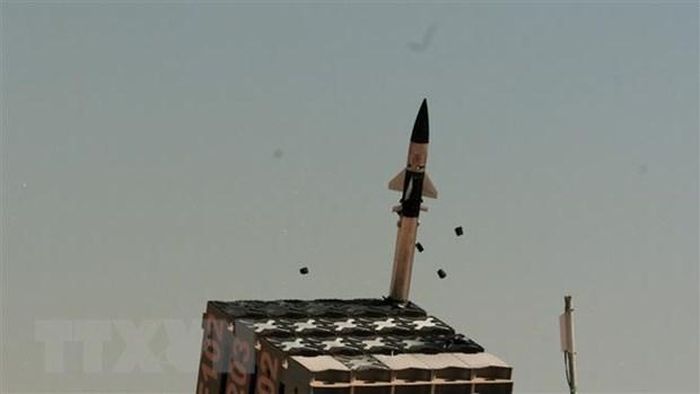 The Iron Dome system tested to intercept missiles. (Photo broadcast by VNA) The Times of Israel on June 15 reported that Israel Defense Forces (IDF) deployed several Iron Dome missile defense batteries near Jerusalem, before the anniversary parade Jerusalem Day takes place. The parade, originally scheduled for May 10, was postponed due to the 11-day Israel-Gaza military conflict. The parade, scheduled to start at 6pm on June 15 (Israel time), is one of the issues that threaten to escalate tensions between Israel and Palestine. In a related development, clashes broke out between a group of Palestinian protesters and IDF soldiers at the Gaza border. A Palestinian is said to have been shot in the leg and suffered minor injuries. Hamas Movement threatened to resume missile strikes on Israel if the parade continued. The Palestinian news agency WAFA reported on June 15 that dozens of Palestinians were gassed with tear gas when the Israeli army attacked a crowd protesting against a march that was about to take place in Jerusalem. According to WAFA, the Israeli military fired tear gas and hurled stun grenades at protesters at the entrance to the town of al-Ram in Northeast Jerusalem. In addition, the Israeli army also attacked and drove away Palestinian protesters at the Bab al-Amoud area (also known as the Damascus gate), one of the gates to the Old City of Jerusalem. At least two Palestinians were arrested in the incident.

What are the advantages of the source code of the mini...

editor - June 16, 2021 0
With the continuous development of technology today, all walks of life are linked to the Internet, especially the penetration of big data and cloud...