Although we lost, we still got into the 12 strong teams of Asia with the position of one of the best runner-up teams. At the same time, Vietnam can directly enter the Asian Cup finals 2023 without having to play the qualifying round. Vietnam is the first team in Southeast Asia to achieve this achievement. 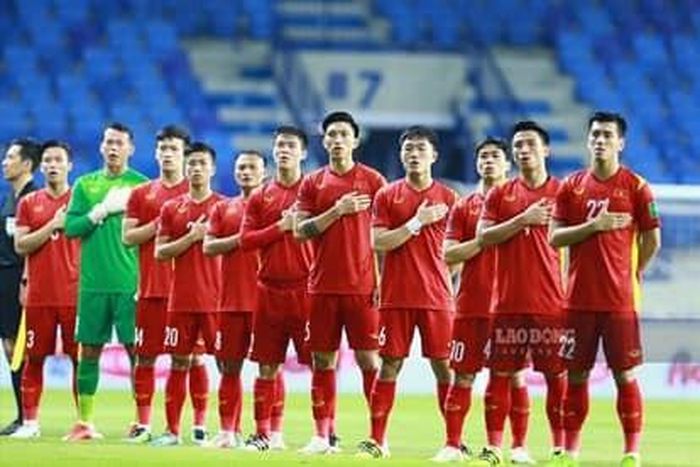 According to the registration list, the coach chose a 3-4-3 tactical scheme, with strikers Van Duc, Tien Linh, Quang Hai, midfield with Van Hau, Xuan Truong, Hoang Duc, Trong Hoang, row. The defenders are still 3 names Tien Dung, Ngoc Hai and Duy Manh, the goalkeeper position is still Tan Truong. With this scheme, we can switch to 5-4-1 to defend or 3-5-2 to attack and threaten your team’s goal. With the intention of hitting quickly, winning quickly, right from the opening whistle, all UAE players pressed VN to the home field, many attack plans were given by the UAE, but Sao warriors Gold covers each other very well. 30 minutes, both teams take a break to rehydrate. After the rehydration time, the UAE organized an attack immediately, while the players we had were not in the right position, the player Ali Salmeen (5) had the ball on the right wing and shot, knocking Tan Truong down. 32 minutes, 1:0 for UAE. Losing first, the Vietnamese players were a bit rushed, instead of keeping the ball firmly and deploying upwards, the players were swept up in the UAE’s play, which is what the UAE expected, with better health. , a more skillful technical level, made the VN team unable to deploy the ball upward, the role of the central midfielders was also overshadowed by the close-pressing style of the team’s players. 39′ VN got a penalty kick because goalkeeper Tan Truong fouled the striker and Mabkhout (7) scored the second goal for UAE and also the 11th goal in the WC qualifying for this player. After the second goal, the UAE actively reduced the tempo to preserve the score. Our players are still persistent and clingy, but we can’t change the situation. I don’t know if it’s the absence of Mr. Park on the bench, but the Vietnamese players are completely passive in front of your team. The clustering with the majority to limit the attacks of the UAE is not a good measure. Because Vietnam defended with a large number, Tien Linh alone was completely ineffective. In the second half, the UAE players reduced their tempo, they were no longer as massive as the first half, but they were still waiting for the arrival of Vietnamese players. 51′ UAE has a nice combination, ending with a header by defender Khamees () 3:0 for UAE Leading 3:0, the UAE players are somewhat loose, they no longer have the upper hand, but only pass each other in the home field. In the 61st minute, Cong Phuong broke through in the penalty area and was knocked down, the referee did not give a penalty. Our players increased closeness and then the opportunity came, 85′ Quang Hai won the ball in the opponent’s legs, passed it to Minh Vuong, Minh Vuong trimmed the ball past 2 UAE defenders for Tien Linh to enter and goal for Vietnam. This is a team goal, the sharpness and agility of Minh Vuong, true to the qualities that we have practiced and used in the previous matches. Although one goal was removed, the UAE players still passed the ball to each other in the home field. In the 80th minute, the Lima naturalized player had a beautiful volley, fortunately Tan Truong was able to push it out. The UAE players do not know if they are tired or want to keep the score 3: 1, but they mainly pass the ball to each other in the home field. In the third minute of injury time, Duc Huy stole the ball from the opponent’s defender’s foot, the ball was passed to 2, 3 Vietnamese players and the last one, Minh Vuong, scored a goal to shorten the score to 3:2 for the VN team. In the last minutes, the Vietnamese players played better, we continuously pressed the UAE players to the home field, due to too little time, we had to accept losing to the UAE with a tight score of 2:3. In the second half, we replaced all 5 players, Xuan Truong, Van Duc, Hoang Duc, Van Hau, Trong Hoang with Duc Huy, Cong Phuong, Minh Vuong, Hong Duy and Van Toan, the new players did for VN’s play is better, especially Minh Vuong, who has 1 goal and 1 assist. Although we lost, we still got into the 12 strong teams of Asia with the position of one of the best runner-up teams. At the same time, Vietnam can directly enter the 2023 Asian Cup finals without having to play a qualifying round. Vietnam is the first team of Southeast Asia to achieve this achievement. Congratulations to the Vietnamese players. We will also be able to follow the Gold Star warriors in the 3rd qualifying round to win votes to attend the 2022 football world finals. The third qualifying round will consist of 12 teams divided into 2 groups, the teams will play the first leg and return, select the 4 first and second teams from the 2 groups to go directly to the WC, the 2 3rd place teams will also meet to go and return, the winner will play against a team in another continent for the final round of WC 2022 in Qatar. The fact that VN is in the 3rd round is an honor and also a responsibility for the players and the coach team of Mr. Park, we must train from physical to professional, must have many quality shots to be able to dispute. with the top football teams in Asia.

The TTCP concludes many violations as reflected by the Ho Chi...