Zhang Yaoxi: The bullish trend remains bullish above the one-hundred-week gold line when the eagle’s words are negative.

On the trend, the price of gold since Opened at the beginning of the week at 1877.26 The US dollar per ounce was under pressure in the early stage due to the Fed’s eagle expectations, and then the Fed’s decision to surprise the eagle impacted the world. The dot plot predicted two interest rate hikes in 2023, which pushed the US dollar to a high for several months and suppressed it. The price of gold continued to plummet down until Thursday;

Although there was a rebound at the end of the week, under technical pressure and after the Federal Reserve Brad indicated that it might be suitable to raise interest rates next year, it once again assisted the dollar index to rise sharply, rising to 92.40 intraday, recording the biggest weekly gain in 14 months. Make the price of gold start down again, and record a new low point again Week low 1761.57 USD, but also Closed at 1761.86 Dollars, Weekly amplitude of 116.14 US dollars, closed down 115.4 US dollars, a decline of 6.15%. The biggest weekly decline in more than a year. For more specific trend causality, check the weekly review article. 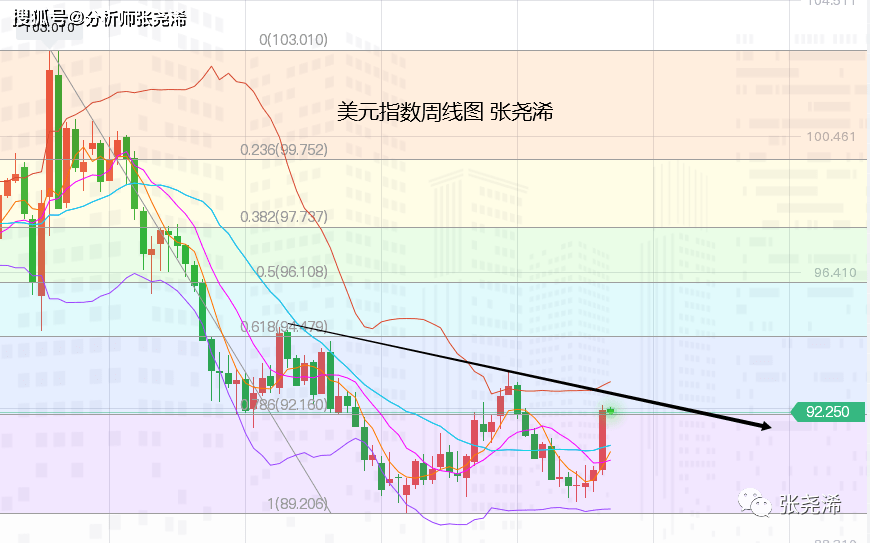 Looking forward to the opening of this week on Monday (June 21): After the international gold opened at US$1,765.69 per ounce, the trend stopped falling and rebounded. Although it rushed higher and then fell sharply last Friday, the inverted vertical line was charged in the continuous decline of the market, which usually means the end of the decline. The next market rises Probability Larger, so it also produced a certain bullish expectation. In addition, technically, it is currently near the support of the 50% retracement line of the 1451-2075 upward trend, and it has not effectively broken below, so it also has a certain supporting effect.

On the whole, the technology is expected to rebound, but it has not shown strong buying demand. Fundamentally, SPDR gold holdings increased by 11.07 tons on Friday, which also shows that large institutions still have not lost confidence in gold. Variant strains raging in the UK may bring some hedging demand to the gold market, but there is still greater negative pressure because the Fed’s strong eagle view is still shrouded in the market.

If the following speeches and economic data show stable performance this week, they may be dispelled, and the gold price will return to the bullish market with high inflation expectations. Therefore, this week’s economic data and speeches will be the focus. Whether the bulls can be bullish again depends on the further development of this week’s trends and fundamentals;

Focus The core personal consumer price PCE index is expected to drop slightly from 3.1% in April to 2.9% in May. Stronger-than-expected personal consumption expenditure inflation may allow the US dollar to continue to outperform its competitors and depress gold prices, and vice versa.

In terms of events, there will be speeches by many Fed officials headed by Fed Chairman Powell and the Bank of England’s interest rate decision. Market attention is relatively high, and investors need to plan ahead.

Focus See if the Fed is prepared to adopt any new wording on the reduction of debt purchases, and whether he will try to change some tough stances. If the view surrounding the reduction of debt purchases actually started in September instead of December, the dollar may rise further, and vice versa. For more details, check the weekly review article or the economic calendar. 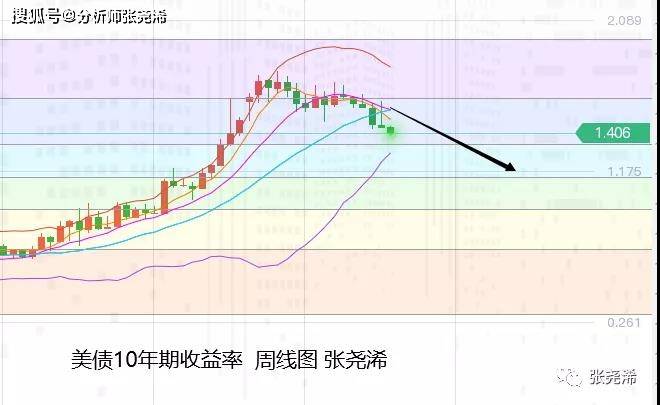 In terms of point of view, Zhang Yaoxi believes that: Last week, the Fed’s policy outlook suddenly reversed strongly, bringing the first interest rate hike forward to 2023, which triggered a sharp drop in the price of gold. But the trend response of gold is also a bit overdone,

At the end of last week, St. Louis Fed President Brad’s remarks further boosted the US dollar, making it difficult for gold to regain lost ground, but it also added that inflation was more serious than expected. Therefore, after the market has calmed down and re-understood that inflation is not only temporary, in the current environment of high growth and high inflation, according to the time point of the Fed’s interest rate hike proposal, it will not be implemented for at least 18 months.

Looking back at the historical market, the price of gold rarely fell more than one hundred dollars in consecutive weeks, and it was on top of the bull market trend since the previous year. Therefore, the further technical target is the 100-week moving average or the continuation of this wave of decline. Location. So this week, we will focus on this position, the double bottom support in March, and the 100-week moving average support. If you touch this, you can see the rebound first. If you fall below, make another plan. Specific ideas and operations are subject to actual warehouse information. 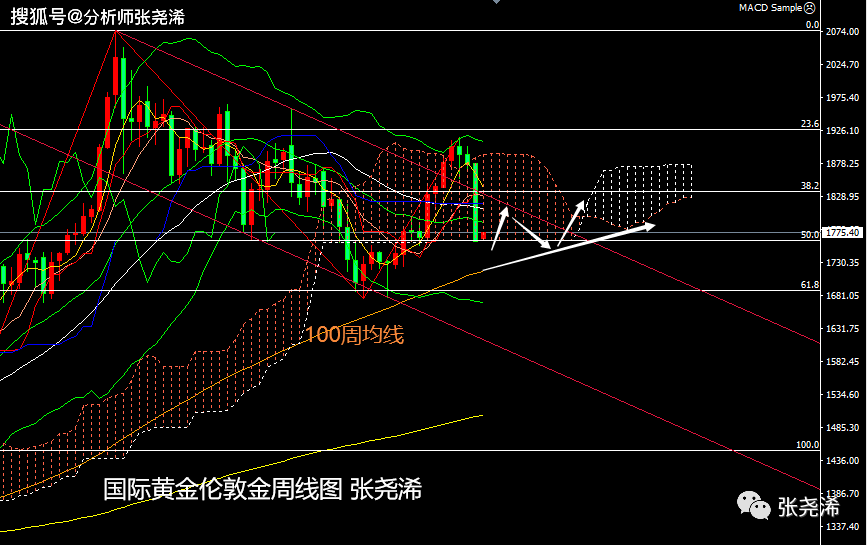 Technically: Weekly level: Since the close of the physical big Yin column last week, the price of gold is currently near the closing downside of the bullish cloud layer, which is near the 50% retracement line, showing support and rebound. However, the indicators KDJ and MACD in the attached drawings have shown strong performance. Bearish signals, so this rebound is expected to be difficult to sustain, or there is a risk of further decline.

The rebound from the top will focus on whether the mid-rail and the 30-week moving average can break through and remain stable. If it touches it during the week, it can go short first. . 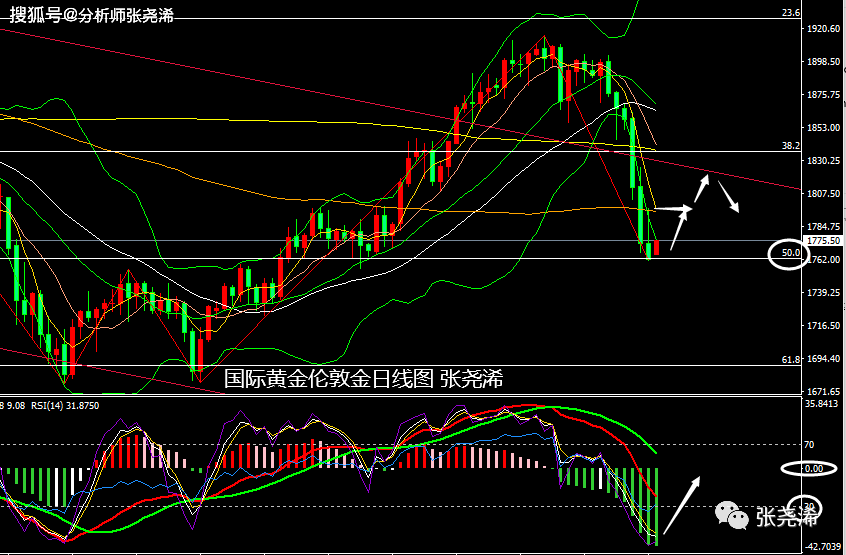 Daily level, The price of gold has fallen sharply since last week, and is currently rebounding near the 50% retracement line touched, suggesting that the market’s negative impact on last week has weakened. In addition, the short signals of KDJ and MACD indicators in the attached photos have begun to weaken. The overall situation is also in a sharply oversold position, so there will be continuous sharp rebounds at any time, and there will also be room and strength for rebounds in the day. The initial resistance above focuses on the 100-day moving average and the 5-day moving average. In addition to no positive factors, it is expected that the rebound will fall again when it hits it. If it breaks through, it will be bullish at US$1820 or even US$1835.

International Gold: Follow below 1763 Support near the dollar, and 1755 Near the US dollar; follow above 1779 Initial resistance near the U.S. dollar, and 1794 US Yuan near.

Make bold predictions and trade with caution. The above opinions and analysis only represent the author’s personal thoughts, and are for reference only and not as a basis for trading. According to this operation, the profits and losses are at your own risk.

Build Ho Chi Minh City into the leading destination in the...