Historical traces, knowledge treasures of ancient Egyptian civilization are inscribed on the papyrus, simple but not afraid of time.
Egypt is often known as the cradle of human civilization, with great works such as pyramids, masterpieces of painting, sculpture, and unique mummification art.

However, have you ever wondered where this huge treasure of knowledge, from drawings, historical books or records of artistic quintessence, is kept? The answer is papyrus. Traces of majestic history, primitive knowledge from one of the first human civilizations recorded on papyrus, passed from generation to generation. Therefore, the papyrus has become a symbol of culture, spirituality and history of ancient Egyptian society, as well as the precious heritage of modern Egypt. 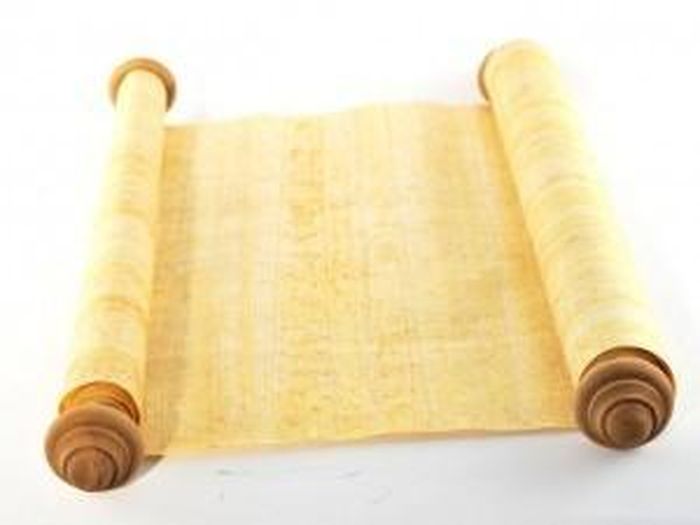 Paper roll of papyrus. (Source: UK McClung Museum) Ancient, versatile The papyrus papyrus is one of the oldest known plant species known to mankind and Egypt is considered the origin of this plant. The papyrus grows in the swamps on both sides of the Nile River, relying on the sediments of the Nile to nurture and grow. The oldest recorded record of the appearance of the papyrus tree is that of the Greek historian Herodotus, in 450 BC: “The papyrus grew from the swamps, the body was fine. cut and processed into different products, the lower rhizome is eaten or sold ”. The ancient Egyptians discovered the value of papyrus in everyday life. Not only was the main material in papyrus paper production, papyrus also had many other uses in the daily life of ancient Egyptians. The lower stems and roots can be eaten raw or grilled. One can chew on the papyrus stalk, swallow the water and then spit the pulp like gum. Papyrus is also braided as a rope, fishing net, even a boat or decorative details on a boat. In households, papyrus can be used as firewood for cooking, knitting into everyday items such as bags, corks, bed sheets, carpets, curtains, slippers … In the medical field, dry papyrus ash is used to treat skin diseases (caustic, calluses …) or prevent cold sores from developing. 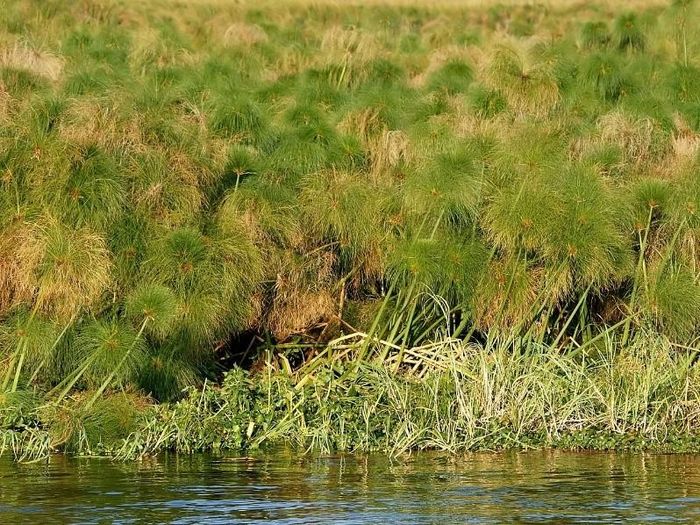 The Papyrus habitat is wetlands along the banks of the Nile. (Source: African Plants – A Photo Guide) Witness of history In ancient Egyptian cosmology, the world was created when the first god stood on a mound emerging from the infinite darkness, indistinguishable between darkness and water. Every year, this mound will emerge from the water with the papyrus. Therefore, the papyrus is the symbol of fertility, rebirth, the germ of creation. In that sacred sense, the ancient Egyptians used papyrus as amulets, funerals, mummies or paintings in temples. Amulets made from the papyrus tree are worn around the neck, sewn on a mummy’s scarf, or placed under the mummy’s head to help the deceased feel as warm as they were alive despite having stepped foot into the afterlife. The paintings on the walls of many tombs show that papyrus was used in ceremonies or funerals. The attendees at the ceremony often carry papyrus stalks as an offering to the gods. There is an opinion that when thinking of Egypt, people immediately think of papyrus. The ancient Egyptians invented papyrus paper for so long, so long that it is impossible to determine the exact time. Much of the history of Egypt and the ancient world came to the modern world through information written on papyrus. The use of papyrus paper from the I Dynasty, 3100 BC is recorded on frescoes in the shape of a scroll, and is also considered an image of a book. So how was papyrus produced by the ancient Egyptians? First, they pulled the papyrus stalk out of the swamp, tied it in bundles and brought it to the processing plant. Then, the stalk is cut into thin slices, soaked in water for several days to soften. Finally, the slices are layered, squeezed out of water and strengthened adhesion. The papyrus is dried, which can be glued to increase length depending on the intended use. 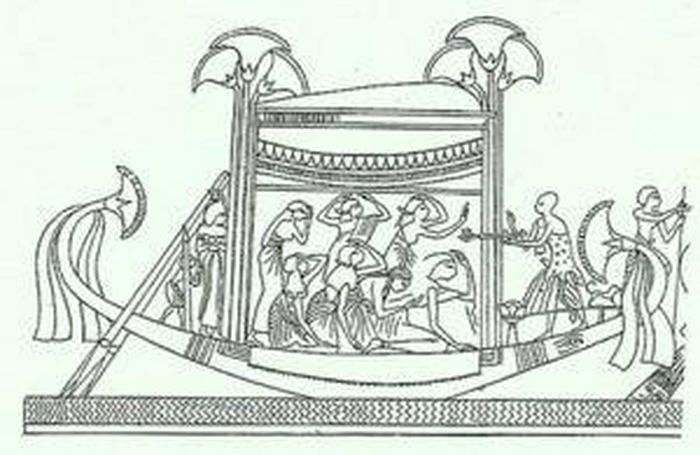 The image of the papyrus tree is used as a decorative detail on the boat. (Source: UK McClung Museum). Ancient papyrus is found in many places, but mainly in tombs. During the 1903-1920 excavation at the village of Deir al Medina (the residence of those working for tombs in the Valley of the Kings), in the city of Thebes (now Luxor) by the Italian Egyptologist. Leading Ernesto Schiaparelli, historians found 16 meters of papyrus, known as the “Book of the Dead” on the tomb of the main craftsman Kha and his wife Merit (built around 1386-1349 BC ). This is an ancient Egyptian religious document, another name is “The Book of Light” or “The Letter”, a collection of spells and spells recorded to help the soul of the dead to the next world. the other through “Underworld Gate”. The book was written by many priests over a period of 1,000 years. Originally, this book was inscribed in hieroglyphs in pyramid mausoleums and served only to the Pharaohs. However, by the New Kingdom period (1550-1352 BC), this book was copied on papyrus by priests and used for princes, officials, and the upper class. The letter will be read during the mummification process and left in the tomb of the dead. 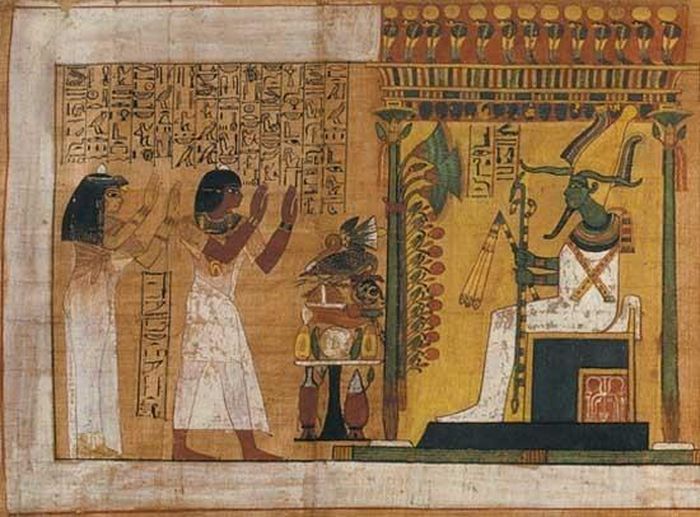 Kha and his wife Merit in front of Death Osiris sitting under a papyrus tree in the Underworld. (Source: UK McClung Museum). Wait for the day “reborn” Today, under the influence of topography, environment and the development of modern settlements on the banks of the Nile, the papyrus tree is almost extinct in Egypt, and as a result, papyrus paper making has gradually faded. one. A small village in Egypt, one of the last to retain the papyrus tradition, is called Al Qaramous (Al Sharqia province). Artist Atef Mohamed Shehata is one of the few artisans in the village who also harvests papyrus and produces papyrus paper. Papyrus seeds are planted and it will take about a year to reach harvestable maturity. After harvest, the tree will regrow in about 1-2 months. Once upon a time, the whole village was covered with papyrus tree, but up to now, the area of ​​this tree is only about 4 hectares. At the end of the finishing process, the papyrus will be sold to other artists in the village, one of which is painter Saied Tarakhan. Finally, paintings on Papyrus paper will be sold at souvenir shops. However, the Covid-19 epidemic broke out, causing a significant decrease in the number of tourists, directly affecting the livelihoods of the villagers, who mostly depend on the harvest and sale of papyrus paintings. Tarakhan artist had to leave all of the studio’s painting staff and partially shut down the workshop. However, with the craftsmen Shehata and Tarakhan, papyrus has become a sacred part of life. They will continue to preserve the tradition of papyrus and papyrus painting for many generations to come, with the same hope that this tradition will continue to be restored, more brilliant and true to the meaning of the “rebirth” of the papyrus species. .

Hải Vân/Báo Tin tức - June 3, 2021 0
A top Chinese official may have inadvertently revealed the name, address and details of one of the first suspected COVID-19 cases in Wuhan, three...