Home Cuisine Pho Saigon must be served with price – herbs and the difference...

All are called Vietnamese pho, but there are still interesting features.
Referring to Vietnamese cuisine, no one can forget Pho. Served with pho is usually beef and chicken. The beef is thinly sliced, pounded, dipped in the broth and picked out at the right time so that the meat is just cooked but still soft and delicious; Chicken is usually boiled whole, then cut into small pieces, arranged evenly in a bowl, on top of the noodle that has been exposed, then the broth.

Pho Hanoi has existed since ancient times, it has become an indispensable culinary culture of Hanoi people. The broth of Hanoi Pho is usually clear and sweet, with the genuine sweetness of the bones. In Hanoi, it is customary to add a little bit of MSG to the broth. Writing about Hanoi pho, writer Thach Lam once wrote in the work Hanoi hashed six streets: “ Pho is a special gift of Hanoi, not only in Hanoi, but because it is delicious only in Hanoi. “. Good pho must be “classic” pho, cooked with beef, “ The broth is clear and sweet, the cake is flexible but not crushed, the fatty meat is crispy but not chewy, the chili lemon and onion are enough. “,” fresh herbs, northern pepper, drops of lime com, and a little bit of ca cuong, lightly as a doubt “.

If eating pho in Hanoi, the seller will only offer a bowl of “rustic” pho consisting of beef noodle soup and scallions, perhaps with a slice of lemon, chili or a few slices of onion. In particular, Hanoians love to eat beef noodle soup with fried doughnuts. Crispy, fragrant, crispy pancakes will be dipped in broth and served with pho. Pho Nam Dinh 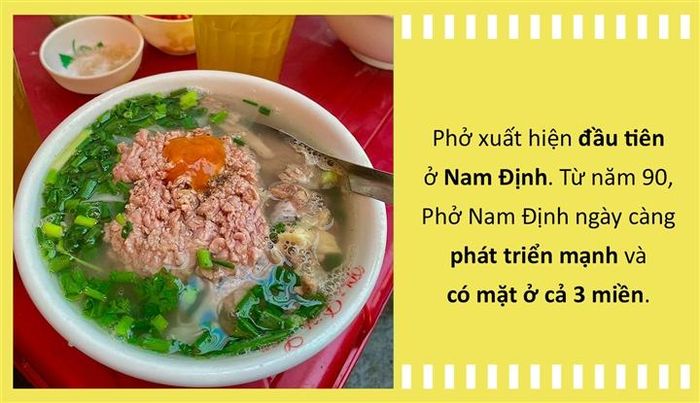 There are many theories that pho first appeared in Nam Dinh, where the secret to making pho broth is often passed down from generation to generation. From the mid-60s to before the 90s of the 20th century, for many reasons, Pho Nam Dinh was absent for a while in other localities. However, from the 90s onwards, Pho Nam Dinh recovered again and grew stronger. 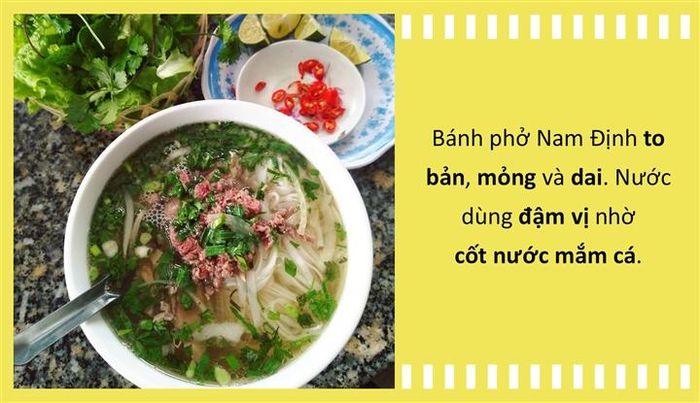 Nam Dinh noodle soup has the most distinctive features, is a type of large fiber, very thin, soft and tough, never broken. I heard it’s because they add a little dong flour when making pho. Nam Dinh Pho has a stronger flavor than Hanoi Pho thanks to its fish sauce base. The broth has scum, rich in fish sauce, beef bones and pepper. When enjoying, diners add ground chili, fresh chili, vinegar and serve with small crispy crackers. Pho Saigon

With Pho Saigon, you can feel the sweetness of sugar quite clearly. In particular, many Saigon people also cook broth with chicken bones and add dried squid, perhaps because of that, the broth of Southern pho is slightly cloudy, has a fatter and more greasy taste. In the South, in addition to the main bowl of pho, they also have an extra cup of fatty water (the fat of beef bones, in some places even blood juice) to keep if customers want and sweet sauce (black sauce), red chili sauce. .

Pho Saigon is usually sold with lemon, fresh chili, coriander, basil, bean sprouts (blanched in boiling water or eaten raw), thinly sliced ​​onions (can be soaked in vinegar), which are vegetables. required, usually placed separately in a plate or basket sold with each bowl of pho, guests can take whatever they like and put it in their own bowl. Nowadays, pho has become a popular and indispensable dish in Vietnamese cuisine. Pho has also become more diverse, processed in many different ways, but pho cooked in the traditional way is still the most popular not only in the country but also in many other countries around the world.

editor - April 15, 2021 0
Sweet potatoes are one of the food sources that are effective in helping to lose weight. If you eat the boiled sweet potato dish...