Home Travel Self-driving to visit the “King of the North” in Europe: all the...

Geographically speaking, Norway is the northernmost country in the entire European region, and its Norwegian country name-Norge (Noreg) means “the road to the north”. Geographically, “Europe’s northernmost” has created many unique natural landscapes and landforms for Norway, such as fjords, J plains and glaciers. Therefore, this stunning natural scenery of “Northland” has also been praised by the outside world as ” King of the North”. Norwegian fjords are always talked about by tourists (the only natural landscape that does not exist in China), and it stretches for a long time. The geographic starting point is located in the Lysefjord south of the southern port city of Bergen, and the northern end is located in Alesund, north of the Geirangerfjord. If you have the opportunity to take this famous fjord landform route, you will find that this trip is not as busy as Oslo, and there are beautiful scenery everywhere: beautiful canyons, open waters, and real virgin forest parks… Walking down the landscape road, you can’t help but embrace nature, forget about the natural beauty of the green mountains and green waters, and indulge in a Nordic fairy tale world that you don’t want to wake up at all. Day1 Bergen: Sightseeing in the city of literature and art Bergen is the largest city on the west coast of Norway, the largest seaport in the country, and a famous cultural heritage city. Northern Europe is known for its cold climate, but Bergen can enjoy the warm current of Mexico, so it is humid and comfortable all year round. Bergen was built in the 11th century AD, and it played the role of the capital of Norway for nearly three hundred years, until Oslo became the new capital of Norway in 1814. It is not an exaggeration to say that Bergen is “Norway’s most literary city”. At the old wharf, the historic sites that Bergen integrated into the European Union of Lufthansa are still there, telling a long history. In the city, there are a large number of ancient churches, concert halls, art galleries, museums, theaters, art festivals, performances, open-air concerts, art and design exhibitions, in Scandinavia and throughout Europe. Ranked among the best. Not only that, as a vibrant city, its countryside is integrated with the fjords, making it a paradise for outdoor sports enthusiasts. Recommended self-driving route: Bergen Airport-25km-downtown (Bryggen Wharf-Fish Market-Floyen Cable Car-Hockensund Palace-Bergen Art Museum) Bryggen Wharf is the business card of Bergen. Rows of old houses gather restaurants, museums, and cafes. Near the pier is a fish market that gathers the best seafood from the west coast of Norway. On Floyen Mountain, you can take the Floyen Cable Car, the oldest cable car in the world, to the top of the mountain and have a bird’s eye view of the entire city. The local Bergen Art Museum is composed of Bergen Fine Arts Collection, Steineson Collection, Lasmby Meyer Collection and other parts. It is the most valuable art gathering place in Bergen, near the museum The city squares and parks are suitable for walking. Bergen hotel recommendation: Clarion Hotel Admiral (Clarion Hotel Admiral). This hotel is one of the most famous viewing hotels in Bergen (built in the early 20th century), across the water from the Bryggen Pier and the Floyen Mountain. The hotel’s 210 rooms have wide viewing windows, 50 of which are facing the harbour. In order to give guests a chance to get to know each other, the hotel also specially set up a large public living room with artworks. The hotel is only 2 minutes’ walk from Bergen Pier, 6 minutes from the nearest shopping street, and 18 kilometers from the airport. Address: C. Sundtsgate 9, Bergen, price: RMB 900 per room (single room). 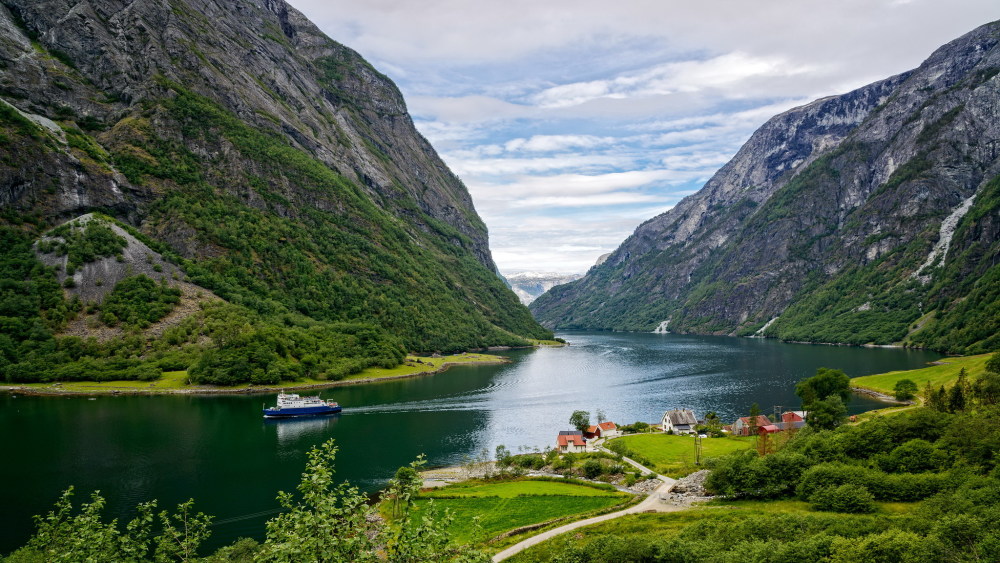 Day2 Bergen-Sognefjord 4h: Norway’s high point Bergen is the general starting point for trips to the Norwegian fjords. The landscape road has been surrounding the fjord area all the way to the north. The scenery you see makes you feel like you are traveling in the middle of a painting, and the roads along the way are flat, which is definitely the best choice for self-driving tours. Self-driving route: Bergen-Rv48 (120 kilometers)-Hardangerfjord-E16, Rv13 (250 kilometers)-Sognefjord. Along the highway from Bergen to the north is Hardangerfjord. It is known as the second largest fjord in Norway and the third largest in the world. You can climb mountains here, and there are orchards, glaciers, and We can watch seals and whales. The Sognefjord is the largest and deepest fjord in the world, with a total length of about 240 kilometers. The scenery along the way is beautiful. It is a world natural heritage recognized by the United Nations. There are only 30,000 residents in the area. Every family lives in an idyllic pastoral life. . Self-driving tips: Starting from Bergen and heading north, the first to arrive is Hardanger Fjord. This journey is very easy to drive, and you can reach Sognefjord in the afternoon. In addition, this journey can also be taken by train or cruise. The climate in the fjords is much cooler than in the cities, and thick clothing should be prepared. This section of self-driving route requires the help of ferry. The Sognefjord has many branches, and Nr yfjorden is the most famous of them. The narrowest water surface here is only 250 meters wide, and the highest mountain is more than 1,700 meters above sea level. The stave church in Sognefjord is worth seeing. It is a very old wooden structure, and it is also the architectural representative of the “Viking Age” (generally referring to the Viking period from 790 to 1066). There are currently only 28 stave churches left in Norway, 5 of which are located in the Sognefjord, including the 800-year-old Ornes stave church, Haupasta stave church and Polkun stave church. 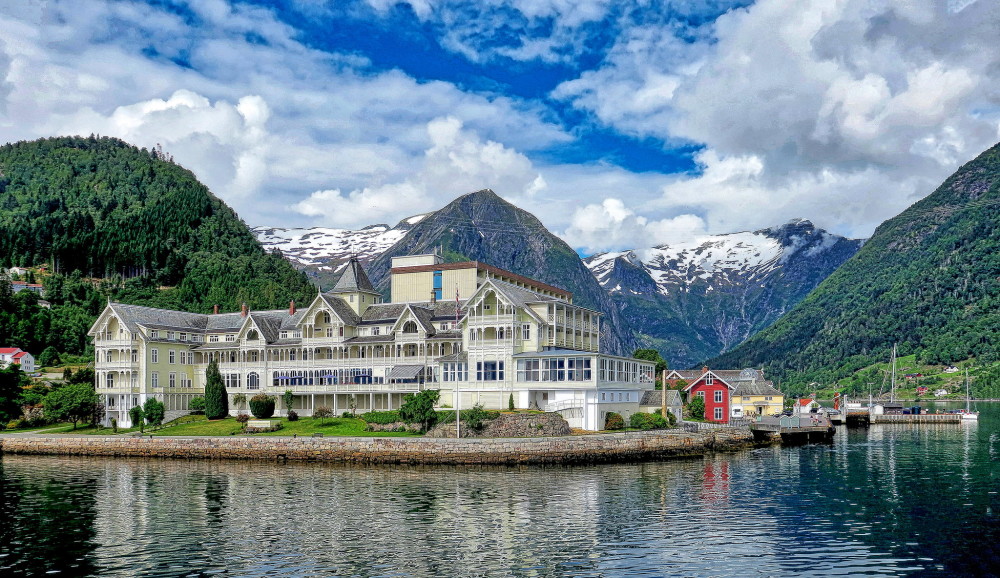 Sognefjord hotel recommendation: Sognefjord Hotel (Sognefjord Hotel). This hotel is one of the best hotels in the local area for travelers to relax. It is located in the scenic town of Leikanger, overlooking the Sognefjord. Each room is a view room with views of the garden, mountains or fjord. The hotel has free wifi. It is worth mentioning that guests can borrow the hotel’s bicycles to ride around the fjord. Address: Sognefjordvegen 20, Hermansverk, Leikanger 6863, price: RMB 1030 per room (standard room). Day3 Sognefjord-Alesund 4h Aalesund is a small city located on the island of Moeller-Romsdal in western Norway. The entire city was reborn after a fire in the winter of 1904. After reconstruction, the architectural style of the small town of Alesund is full of new artistic features, and was evaluated by the American magazine “National Geographic” as “just out of a fairy tale”. Special recommendation: Alesund’s houses have distinctive architectural features. The houses on the three small islands stand opposite each other and form a triangle. You can take a boat to explore the waters in the middle. There are many natural scenic spots around the small town, hiking and swimming in summer, skiing and ice climbing in winter. It is one of the most popular resorts in Norway. After racing in the most beautiful fjords in Norway, you will once again return to the city from nature. In the morning, we depart for Geirangerfjord. Most of the landforms here were formed during the ice age. Compared with other fjords, it is more spectacular. There are also many famous large waterfalls in Norway (tips: Geirangerfjord). Compared with other fjords, the travel in, is more difficult, especially some trails in national parks, which are only suitable for people with outdoor sports experience). In the afternoon, head to Alesund and stay here. Self-driving route: Sognefjord-passing Rv5 (250 kilometers)-Geirangerfjord-Rv60 (102 kilometers)-Alesund. Alesund hotel recommendation: Radisson Blu Hotel lesund. This hotel is located in the kansekaia area by the Alesund harbour, overlooking the sea. The hotel’s private jetty allows guests to enjoy their vacation in peace. In addition to local specialties, the hotel’s restaurant can also eat organic meals. In addition, compared with hotels in big cities, the rooms here are cheap and easy to book. Address: S. Bullsgt. 7 Alesund. Price: RMB 800 per room (standard room). Norway travel Tips: Traffic: Norwegian vehicles drive on the right. As in China, the roads between cities are mostly two-way single lanes. The Norwegian Transport Agency requires vehicles to turn on their lights 24 hours a day. At city roundabouts, vehicles on the roundabout and vehicles entering the roundabout on the left have the right of way; vehicles on the right side of the intersection have the right of way; vehicles going down on the ramp have the right of way. Most traffic toll stations adopt automated systems. Currency: Norwegian Krone (NOK) is the official currency of Norway. In the retail industry, the penetration rate of the euro is not as good as the krona. Language: Norwegian (subdivided into Norwegian national language and new Norwegian) and Sami are both official languages. Some Norwegians also speak Danish, Swedish and German. English is also very popular, and tourists can use English to communicate with locals. Shopping: Most cities have shopping streets and large shopping malls, but the prices are relatively high. Norwegian goods have a 25% value-added tax, which can be refunded in the airport lobby when leaving the country. Tickets: Some public art galleries and museums in Norway are open to the public for free. Tickets for scenic spots vary greatly during off-peak and peak seasons. You can check the official website in advance.

The barracks are as beautiful as the park