The miracle of building Fansipan cable car was established by Sun Group people, not only with technology, but with faith, teamwork and extremely small things.
Cable car through the clouds, near the top of Fansipan, rhododendron flaps have bloomed sporadically, sometimes hidden, sometimes in the mist.

“ So beautiful ‘, many tourists exclaimed. “ This cable car must be done in the West, but how can Vietnam do it? “. “ It’s Vietnam that did it “. “ That’s amazing, the forest, the mountains are so steep, it’s really talented to get the cable up “. “ Must use a helicopter, right? “… Questions from visitors mixed in with the sound of loudspeakers introducing the Sun World Fansipan Legend tourist area. Suddenly, it has been 5 years since Sun Group inaugurated the cable car line connecting the earth to the sky, Trinh Van Ha, Dang Ngoc Hong and their teammates have just returned to Sapa. 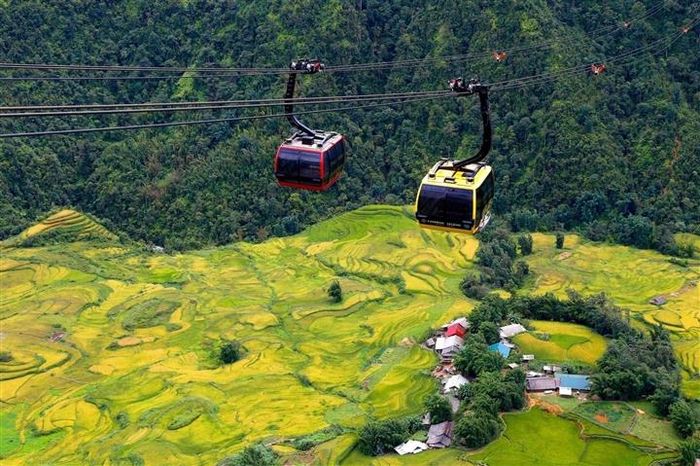 Fansipan cable car “flying” through Muong Hoa valley. “ Everything has changed so much “. Sapa is no longer as attractive as the day when surveying engineer Trinh Van Ha carried a backpack for 8-9 hours on the bus from Hanoi to Fansipan. The stories between the two guys who used to eat the dew and sleep in the mountains every day kept flowing, on the cable car cabin – something they used to wonder constantly “ Can it be done and when will it be done? , when standing from the foot of the mountain looking up, do not know where is the top of Fansipan that they have to take the cable car to. “ Initially, the cable car station was planned to be built in Sin Chai. But there, if you choose to set the station too low, guests will not be able to see the beauty of Muong Hoa valley. If placed in a high position, it will affect the unspoiled landscape. The current departure station location is high enough for visitors to see the valley, low enough not to disrupt the beautiful landscape of the Hoang Lien range. “- the story of choosing the location of the departure station, the arrival station, and the cable car poles, Trinh Van Ha still remembers it clearly. Because you had to climb all 5 mountains around Fansipan peak several times before coming to the final decision. “ The shack is still there. 700 thousand/night Dang Ngoc Hong pointed to the shack peeking under the forest canopy, recalling the memory of the early days of climbing Fansipan, not having time to return to town when it was dark, the ethnic people charged a fee to stay in a shack for a night more than a hotel. 3 stars. The fear of getting lost in the night in the middle of Hoang Lien forest made him shiver. 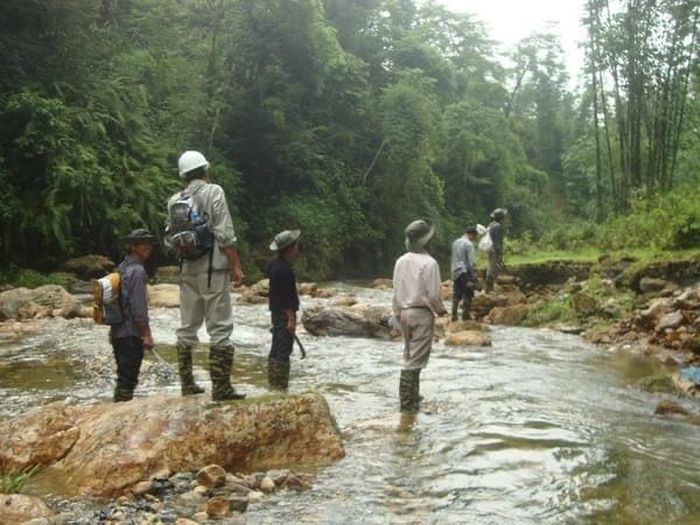 Sun Group engineers went to survey Fansipan in 2013. From the cable car cabin looking at the mountain range on the other side, only seeing 35kV electric poles soaring out of the forest, the feeling of reverberation echoed in him. On that day, every morning, “human ants” (indigenous people were hired to carry materials to the mountains to build electricity pylons) diligently carrying cement, iron and steel… along the mountain’s spine. climb up. “ At one point, 400-500 Hmong (Sapa) and Thai (Lai Chau) people were mobilized to speed up the construction progress. “- Mr. Hong said. Without that 35kV power line, there is no Fansipan cable car now. Making the power line to the top is equally arduous as making the cable car. That day, the luggage that Trinh Van Ha brought to Fansipan was the experience of the guy who had participated in 2 cable car routes to set a world record in Ba Na. But all does not seem to help much, maybe, just a little experience in the jungle, but the forest in Fansipan is far from Ba Na forest. 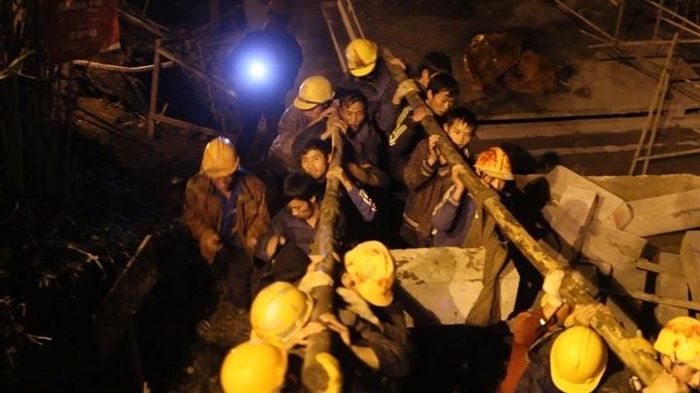 Monolithic stone is transported to the top of Fansipan by human power. In the first days of coming to Sapa, the feeling of excitement quickly gave way to skepticism. The bone-chilling cold at the top was like a needle piercing the skin. Putting down the phone after the quick calls home, he wondered: why did I accept my boss’s invitation to come to this sacred forest and poison water? Or, at best, go home? Ask, to answer yourself: don’t give up. Three months before April 30, 2015, every day, Mr. Nguyen Khac Tuong, captain of the LCS cable maintenance team, signed papers for thousands of people to enter Hoang Lien National Park to work for the cable car company. only about 100 people could stay. Up to now, the nights of heavy snow that had to stay at the T4 tower still haunt Chiang. “ Always have a stick by your side, sometimes you have to get up to see if the canvas is sunken to use a stick to poke the snow down, otherwise the shack will collapse. “. Sleeping on your back? The sleep of those who climb the forest and climb mountains all day has never been as easy as people think. On rainy and windy nights, more than ten boys crawled into a shack set up low like a sowing tent in the countryside, half sitting, half lying down waiting for the morning sun, anxiously afraid of the flood. Snakes, graters, half-cooked meals, days when the flood broke up, food could not be moved to the mountains, eating raw instant noodles with little breath… In this life, none of you can forget Fansipan that day. 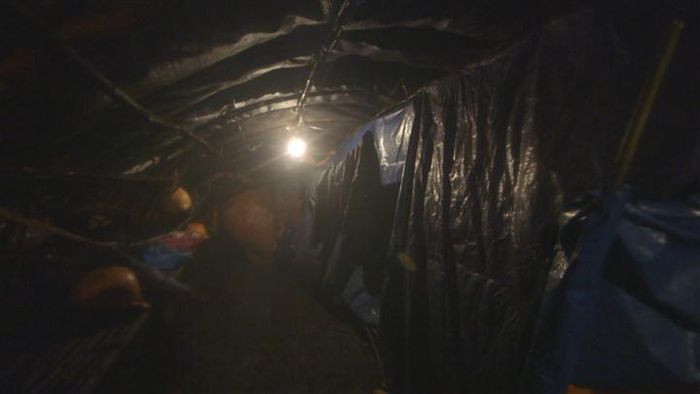 “Duck tent” to avoid the sun and rain of engineers and construction workers on the top of Fansipan. The harshness of the peak of 3143m is a test for Sun Group and foreign experts. After a lot of surveys, the results show that with a steep terrain, the single-wire cable car will not be able to withstand the gusts of wind that can reach level 12 in Fansipan. And the solution proposed by Doppelmayr cable car experts is a three-wire cable car – a technology that Sun Group engineers have never tried. “ Compared with a single-wire cable car, besides the skyrocketing construction cost, the implementation is many times more complicated. 3-wire cable car requires very high accuracy with a tolerance of only 2.5mm – an extremely difficult requirement, it takes a lot of time to get the right construction plan. “- engineer Trinh Van Ha said. And Sun Group chose the three-wire option. Why? Can you still keep the one-line option that was successful in Ba Na? For the safety of visitors. In high wind conditions, the 3-wire cable can still operate smoothly to bring passengers to the top or back to the station. And for the safety of Hoang Lien forest. Using 3-wire cable technology, the number of cable poles will be much less, and this will be the solution that has the least impact on the environment and natural landscape. “ Minimizing interference in the environment when it is a prerequisite “, Mr. Dang Ngoc Hong once again confirmed the explanations of engineer Trinh Van Ha. Decision despite the cost, difficulty. Choose to do it manually so as not to affect the environment. Sun Group posed a difficult problem for its engineers, and made Doppelmayr’s own experts doubtful. 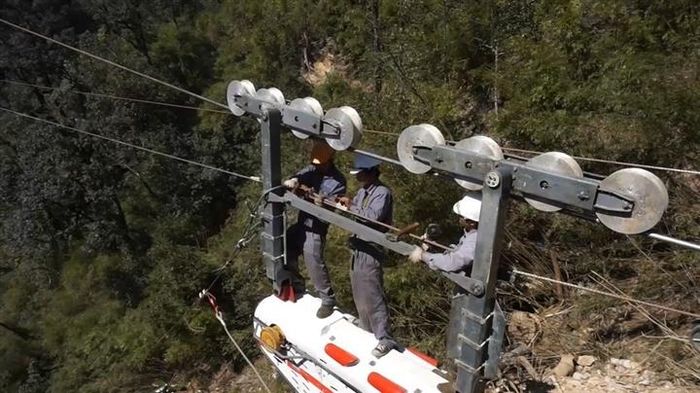 The difference in construction of Fansipan cable car. Initially, when the service cable was almost finished, the basic service station had just finished the foundation. Witnessing the image of Vietnamese workers digging manually, foreign experts said that it took 5 years for this work to take shape. However, after just over 2 years, Fansipan cable car was officially inaugurated, in the joy of people eating wind, sleeping dew, turning themselves into “tarzan” for many months in the forest. Looking back now, they still wonder, somehow, that day, I can make it through. But one thing is certain that you all know, it is the care, love, and camaraderie in difficult times that created the motivation for the Fansipan army that day to conquer thousands, creating a work for a lifetime. . “ Day by day, terrors became the norm. Love, solidarity, care, sharing from a piece of rice, a cigarette, a warm coat are the last things left. “, Mr. Trinh Van Ha is sad. Cable car to Arrival Station. Among the noisy guests on how to build the Fansipan cable car, it is not clear if anyone could understand that the Sun Group people pulled the cable by hand, following the forest road, not by helicopter like the experts. Doppelmayr family still do.

The ‘COVID-19 vaccine tour’ to the US attracts visitors

Hoài Thanh/Báo Tin tức - May 20, 2021 0
According to the Wall Street Journal, foreign tourists are flocking to the US in the form of tourism combined with vaccination. Airlines and tour...