Home Tech The US F-15 regime decided to win and lose with the Su-35?

To enhance the detection and attack capabilities for the F-15SE, the US decided to upgrade this fighter with new equipment, especially the radar system.
The US Air Force has just announced a contract worth 3.12 billion USD with contractor Raytheon to implement an upgrade package for some items on the F-15 fighter, in which the main focus is on upgrading the APG-82 radar.

The Defense World page said that with this upgrade package alone, the F-15SEs are enough to make the latest version of the Su-30SM1 inferior and slightly better than Russia’s most powerful 4++ generation fighter today. Su-35. 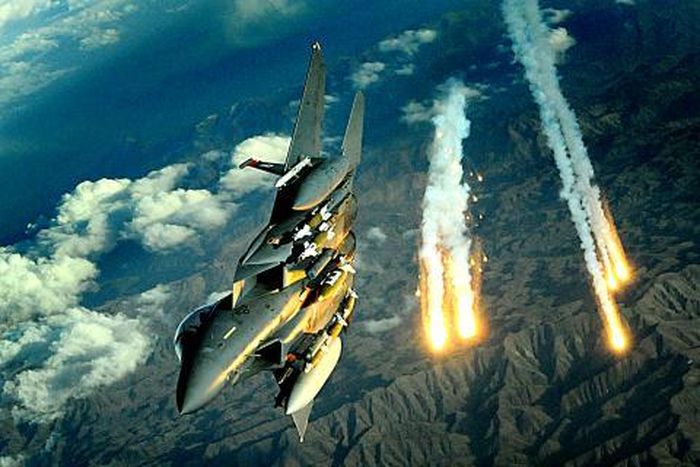 American F-15 fighter. According to this source, the Su-30SM1 variant has been focused on modernizing the avionics system as well as adding modern weapons to help it have the same combat power as the Su-35S. So how is the strength of the Su-30SM1 when compared to an opponent from across the ocean that is the US-made F-15SE because both are in the line of heavyweight air superiority fighters with 2 seats. ? The US newspaper puts the situation that once a direct confrontation occurs between these two fighters, will the bigger victory belong to the Russian fighter or the American fighter? First, the strength of these two heavy fighters and always decisive is long-range air combat. While the Su-30SM1 almost retains the hardware components such as the passive phased array radar BARS N001M, with only software upgrades and a faster processor, on the F-15SE is the AN/APG-82 radar belonging to the F-15SE. Active scanning mode (AESA) has greater accuracy, long range and reliability. The biggest advantage of active phased array radar is its ability to jump frequencies very quickly in a very short time, making it impossible for the enemy to take appropriate electronic countermeasures. The radar reflection area of ​​the F-15SE is very small because it is covered with stealth paint and puts all the weapons in the compartment, making it close to the 5th generation fighter. As for the Su-30SM, it has no improvement. No progress in this area, the RCS is too large with the addition of a pair of nose wings, making it possible for it to be detected in advance by the F-15SE from a great distance and launched a missile to destroy. The Su-30SM1 uses an AL-31FN turbojet engine with a thrust of 12,500 kgs each, while the Silent Eagle is two F110 engines providing a thrust of 13,150 kgs. The maximum speed of the Russian fighter is Mach 2, while in the F-15SE this figure is Mach 2.5+. Russian fighters still can only carry 8 tons of weapons, much inferior to the F-15SE, if taking advantage of the external mount, the maximum capacity of the US fighter is up to 10.4 tons. Part of the above advantage lies in the higher durability of the US fighter’s fuselage, which is also reflected in the F-15’s critical flight hours of 8,000 hours, while the Su-30 is still only 3,000 hours. The only way that can make the Su-30SM1 gain an advantage over the F-15SE is to pull it into a short-range air battle, at which point the 2-way thrust vector control engine and the nose help the Su-30SM1 take the position. better mind. But Russia also needs to watch out for short-range air-to-air missiles with a “lock on target after launch” mode of US fighters because this weapon will make the advantage of mobility disappear.

Theo Vũ My/qdnd.vn - May 16, 2021 0
Telecommunications enterprises (DNVTs) that are eligible to pilot the Mobile Money service (using telecommunications accounts to pay for goods of small value) such as:...