Home Science The secret of the immortal jellyfish’s ‘revival’

When injured or under stress due to starvation, the immortal jellyfish will automatically shrink into small cysts, called polyps. Over time, they will ‘reincarnate’ back as jellyfish with the same genetic makeup as the old individual. 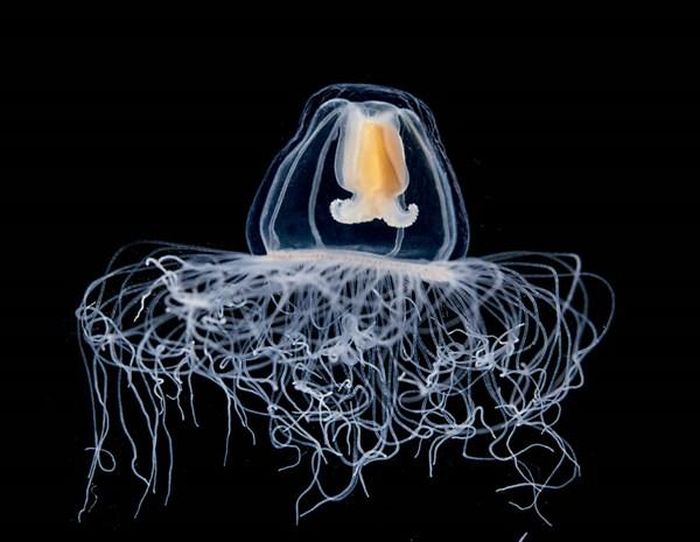 How do jellyfish form? Ms. Miranda Lowe, curator of the Natural History Museum, in London, England, said the life cycle of most jellyfish species is similar. As hermaphrodites, jellyfish have two gonads, male and female, located in the longitudinal gastric tube symmetrically across the gastric plane. Normally, a jellyfish goes through five stages in its life. First, the adult jellyfish will “lay” eggs and sperm into the water. These two cells combine to form a fertilized egg in water. The fertilized egg develops into a small larva, called a planula. It looks like a microscopic worm and can move freely through the water. The planula will look for a solid surface, such as the seabed, for shelter. During this time, it will develop a digestive system and be able to feed itself. Thanks to the right water and temperature conditions, the planula will turn into a polyp. Polyps sprout, multiplying themselves into large clumps that look like giant bushes. When the right conditions are met, the polyps release into many young jellyfish. After the jellyfish is produced, the polyp changes to a younger polyp form. Young jellyfish continue to grow into adults. Despite their unique beginnings, most jellyfish have a short life span, usually from a few hours to several months. Some species can live for several years. However, the immortal jellyfish (scientific name: Turritopsis Dohrnii) is outside this rule. The secret of “tricking” Death The Immortal Jellyfish is a jellyfish-like waterfowl, of the phylum Cnidaria, commonly found in the Mediterranean Sea or the Sea of ​​Japan. It is shaped like a bell, with a diameter of about 4.5mm. The membrane of this jellyfish is quite thin, except for a little thick at the top. Their stomachs are relatively large, bright red in color. Young jellyfish are 1mm in diameter and have only 8 tentacles evenly spaced along the edge, while adults have 80-90 tentacles. Immortal jellyfish can reverse their life cycle when injured or starving to death. This means they could theoretically last forever. When physically damaged or under stress from starvation, the adult immortal jellyfish will transform the body’s tissues and circulatory system back to a polyp state. Because of the loss of tentacles and the ability to swim, polyps again settle to the sea floor. Over the next 24 – 36 hours, this polyp will develop into a new polyp, located in the early stages of the jellyfish. Then gradually, this polyp will hatch into a jellyfish. This phenomenon is compared to the life cycle of a butterfly. Instead of dying, the butterfly can transform back into a caterpillar and then from the cocoon, it will spread its wings again. The process behind the “rebirth” of the immortal jellyfish is a process of differentiated transformation, which is extremely rare in animals. According to research by scientists, cells in adult jellyfish and cells in polyps are different. The process of adult jellyfish shrinking into polyps allows it to form a new body, different from its original form. But the new adult jellyfish and the old jellyfish are genetically identical. Reversing the life cycle can be repetitive. In perfect habitat conditions, immortal jellyfish will never die of old age. Ms. Miranda commented: ‘We can be too focused on the large jellyfish. But little animals like this can provide a lot of great science about jellyfish and the natural world.”

Can lightning clean up the atmosphere?

editor - June 4, 2021 0
American scientists have discovered that lightning has released large amounts of hydroxyl radicals and hydroperoxyl radicals that are invisible to the camera or the...